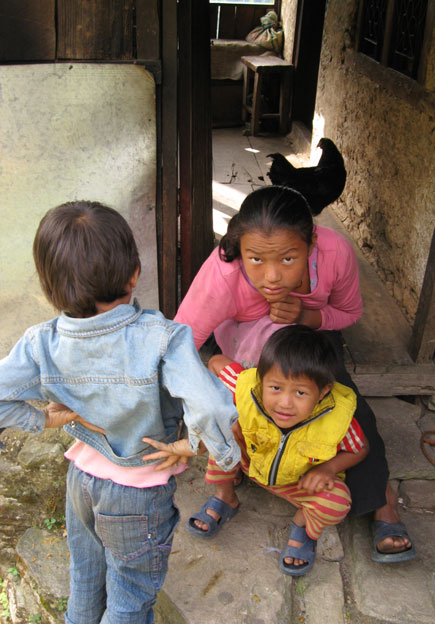 Ashika Lama, with her two little sisters, had lied about her name and didn’t want to be photographed at the later stage of our conversation though she slightly flirted with us in the beginning. She was waiving hands at us as we started climbing upward.

21 October [Tarke Gyang]: We started late, walked really slow and it took us an era to arrive at Tarke Gyang: more than eight hours for a distance that generally takes about four hours to normal trekkers. That was in part, because, we were not sure about going to Tarke Gyang. Sometime I wanted to return while at others Suraj wanted to get back to Timbu. He had a solid reason. He was flirting with a woman (who I can’t identify here for privacy reasons) in Timbu and my impression was that she liked him!

Sixteen-year-old Ashika Lama and her relative kids cleaning the writing on a stupa.

Ashika cleans the writings on the stupa near her house:

Later on, we found from a kid, Ashika’s relative that she had lied to us. Her real name was Yangen Lama and she had stopped going school since last year. She dropped out from sixth grade. My guess was that she wanted to be called as Ashika, so I am calling her Ashika.

In the first photo above, Ashika gives a rare glace at my camera after she avoided so for many times as I clicked her photos. “Ashika, look at me,” I would say and she would never do so though she replied all of my questions in humorous manner. 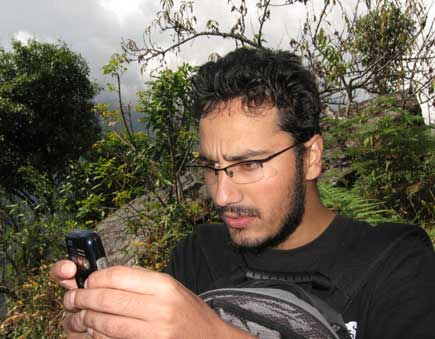 Wagle plays with the cell phone just above Timbu, at the danda where the GSM signal was available. We enjoyed a lot while giving bluff calls to some friends at office. 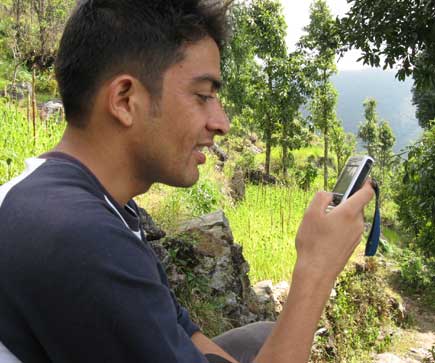 Suraj with cell phone. Behind him is the millet field. 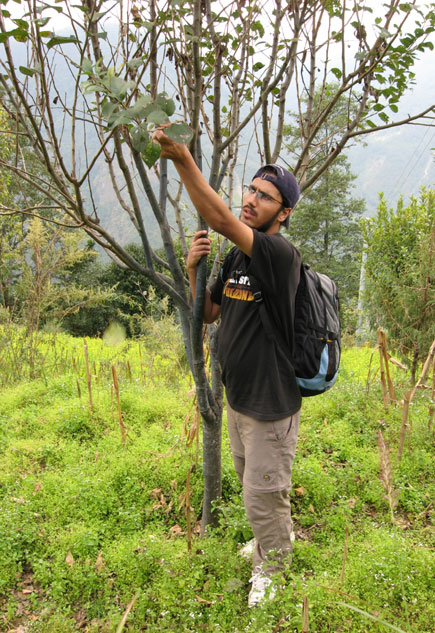 Wagle inspects an Apple tree in a private orchard near Kakani.

Wagle on the trail at Kakani, on the background Apple trees seen. 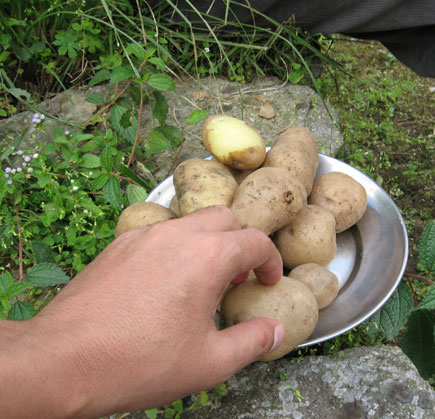 Wagle grabs Aalu (potatoes) that saved him for the day.

Wagle and Suraj Kunwar eat Aalu (potatoes) that saved them for the day.

We had planned to have food at Kakani, two hours up from Timbu but the hotel there was closed. It was already about 12, we had started walking at 8, and we were hungry. There were only two packets of Coconut biscuits and the trail ahead was all covered in dense jungle. There was no place to eat, we concluded if we don’t somehow manage to eat somewhere at Kakani. Then we arrived at the home of this little lady named Tenzen Angmu Lama, requested her mother to boil potatoes for us and filled our belly for about Rs. 50. We were now ready to cross the jungle.

We arrived at Tarke Gyang at around 4 PM and stayed in the hotel of a guy who had resigned from Nepal Electricity Authority after he beat his seniors at the office. We also went to a nearby monastery (Tarke Gyang Gumba) to where we witnessed a Dashain ceremony.

Wagle walks with Maya in Keyul Village. This photo was supposed to be posted in previous day’s journal. Read the story that we wrote about Maya in Kantipur here.