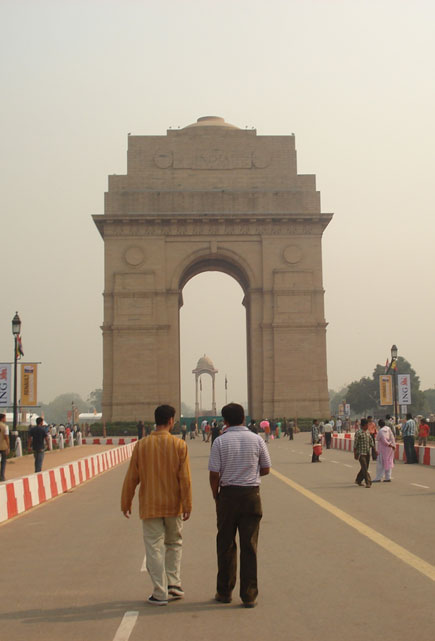 Gopal Khanal, right, gave me a tour of India Gate, New Delhi’s one of the famous landmarks, last week. Here is my contact details in New Delhi.

Late in September I was inside a travel agency on the Nepal-India border of Sunauli. I wanted to go to Delhi and then to Mumbai and Goa. There were no train tickets available. “Okay, book me the ticket that is available,” I told the travel agent. “Anywhere. I just want to travel in Indian train. That’s it. I don’t care where the train goes.”

“Okay, there is a berth available in a train to Trivendram (the capital of the Indian state of Kerala, from Gorakhpur),” said the agent. “That too only in tatkal (immediate) service which means you have to pay extra charge.”

He looked at my face and said these words in a consolatory tone: Well, you can always go to Delhi from Kathmandu in future. There is plane service (between the two capitals) and it takes time (which is about one and half hour).

I was, at that point, more concerned about my train early next morning than spending time thinking about Kathmandu-Delhi flight.

When I returned back to Kathmandu in the mid October I wasn’t in the same Kathmandu. At least not in the same journalism environment.

The breakaway faction of Kantipur Publications (the former publisher with 50 percent shares in the group and the top editors of the dailies Kantipur and The Kathmandu Post) that was planning to bring a new newspaper had separated. The editors had found a new publisher to bring out two daily papers (Dainikee and Republica) and the publisher had found an editor to bring out a Nepali daily (which was named Nagarik a few days ago). 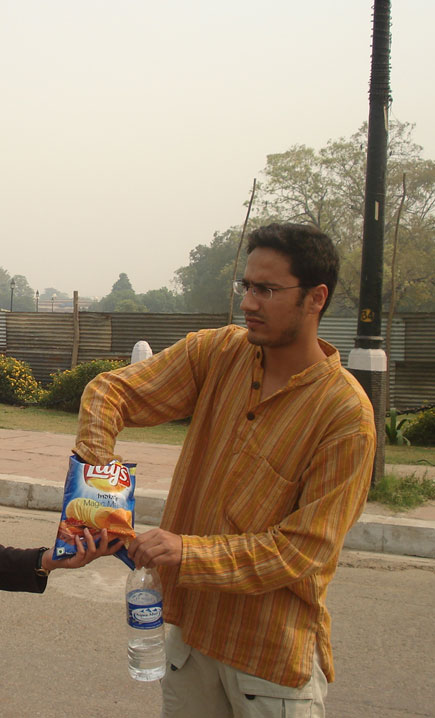 In front of India Gate

Yes there were offers and I was kind of sure which to accept. I had my own agendas. I had my own ideas and I wanted to sell that to the editors. Editors happily accepted.

“Would you like to go to Delhi (to be the chief of Kantipur Publication’s New Delhi bureau)?” the editor asked.

I needed time to think. After a night of thinking I decided.

Today I am writing this entry from my apartment com office (paid for by Kantipur of course) at B 19, Jangpura Extension, New Delhi.

I arrived here on the 5th of this month.

Gopal Khanal, the current New Delhi bureau chief, will go back to Kathmandu to assume the responsibility of the chief of bureaus in the news room of Kantipur daily.

I must say sorry to those kind editors who had expected me to join them. I am sorry that I couldn’t.

And also my heartfelt THANKS to the one of the editors who wished me all the best for Delhi assignment. And again sorry to the other to whom I couldn’t call even though I promised to call.

There are very interesting developments taking place in Nepali journalism and I know that I will be missing that. Kathmandu journalism is going to be (and is already) THE hot and happening place for the next couple of years. But I had my own reasons for choosing Delhi over other options in Kathmandu (which includes the one in Kantipur itself).

So I arrived in Delhi on the 5th and I have been going around with my Gopal. He has introduced me with a few Nepalis (Nepalis and Nepali Indians and some Indians) and taking me to several places. I know I won’t be able to know the city in a few days- even to know the neighborhood in a couple of days is not an easy task. I have gone to several high profile places to the vegetable bazaar to pick up the things that I might need in the kitchen.

As of now, I have concluded, that part has become the hardest: to choose the vegetable. Even more difficult part is to cut that into pieces and cook. I have also concluded that I wont’ be cooking for myself. The problem with this is that by the time the food is ready I feel I am too tired to eat. So what’s the use of spending so much time cooking? The other evening there was a small party in our apartment organized by us with significant help from some local Nepali businessmen (actually they were the organizers, the venue was ours) and we brought some carrots, cucumbers and onions. Durga Khanal and I were cutting those things into pieces and the oldest son of our landlord was helping us. I will be definitely writing about my landlords in the next post. [The father, Mr Mehra whom I call Uncle because he wants to be called so as, he firmly believes, that helps us create personal bond that lacks in the usual Mr. Mehra- Mr Wagle address. His oldest son is about 50 while the youngest is some five years younger than that.]

So I was cutting that damn onion. The landlord was doing it so efficiently that there was so symptom is his eyes that he was chopping onions. But I was crying.

At that moment this thought came to my mind: What the hell am I doing here? I thought I was going to do some international journalism in New Delhi. I thought I was an international correspondent looking for great human interest stories and diplomatic maneuverings. And here I am struggling with a freaking onion that is brining me into tears. 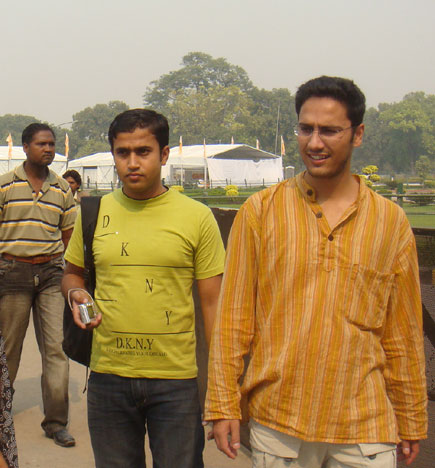 So I think I won’t cook. But, on second thought, I feel I should give a try, at least in the evening. Just rice! Gopal has been suggesting me to do that because, he says, that’s healthy. And I haven’t been able to ignore that suggestion completely.

One thing is certain I will make myself a lot of coffee. That’s for sure. I don’t drink alcohol a lot. I mean I don’t drink alcohol. I drank, on the first day of arrival. A glass of beer. The next day a little bit more than that but then I know I won’t drink. For instance, I didn’t drink today in the farewell dinner with Gopal and Durga Khanal, a reporter with Kantipur who is in Delhi to take part in a English language training program.

But yes I will be drinking a lot of coffee and chai.

Another think I hate about cooking is what you are supposed to do when you have just put salt in the vegetable but it’s not ready yet and you need to be around. Just stand and watch it as if there is an important football match going on. Oieee there is a goal, the milk (or whatever) has spilled over.

It’s a matter of great relief that Gopal has already hired a maid who comes in the morning, cleans the apartment and makes breakfast. I won’t fire her for sure.

But I might have to fire this freaking driver who apparently has no idea about the roads of Delhi. We found his a few days ago and hired him. I can’t drive the car- I plan to go to join a driving school in the next couple of days- and without that no reporting seems to be possible in Delhi, especially for a person like me who is 10-day-new to the city and has no idea of the city. In such scenario drivers naturally become your eyes: Fifth eye to be exact. I already have four. I don’t need my driver to be my ear because I understand Hindi pretty well though I mix more than 50 percent Nepali words while speaking Hindi. Today, instead of the eyes the driver became pain in our back as he showed almost two hours late in the Hotel Taaj Palace where the regional BIMSTIC meeting was going on. [Prime Minister Pushpa Kamal Dahal was one of the seven heads of states/governments taking part in the one day summit.]

Anyway, here I am, in Jangpura Extension hoping to enjoy in India, planning to go around this southern neighbor of hours. I even plan to go to Pakistan in the coming months via Amritsar. There are plenty of garden here and I was jogging in the evening in one near to my apartment. It was beautiful. We don’t have such gardens and the culture surrounding gardens in Nepal.

I had never thought that I would be in Delhi- that too for about two years- when the travel agent was talking about the flights between the two capitals. But then, I realized, you are not the one who in in complete control of your life.

P.S.: I must also talk about the biggest shopping I did after I came to Delhi: I bought an iPhone 3G, 8 GB. I am loving it. The internet surfing experience in it is wow! The wi-fi is even better. But the best thing is I can be connected to my email (and Internet) via the phone’s Airtel network from anywhere any time. That is the biggest excitement of his past week and I promise to devote an entire entry on it in the coming days. [Here is my iPod entry.]

>>>Blogs on my October India journey will be posted as soon as I get time to write.