The Kathmandu Post intro for the following story: Our New Delhi correspondent finds his bearings in a new city
[Here is the PDF version of the Op-Ed page of the Post dated 10 December where this article appeared after it was first published in Kantipur.] 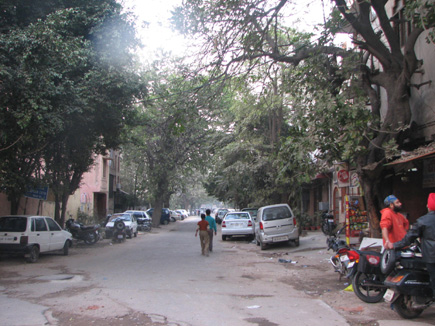 “B 19, Jangpura Extension,” I told the cabbie soon after landing at the Indira Gandhi International Airport in New Delhi a month ago.

In 45 minutes we were in JE looking for the B block. Four minutes later, we were in B block looking for house number 19. And soon I was in front of the building whose third floor is rented by Kantipur Publications, the publisher of Kantipur and The Kathmandu Post, for their New Delhi Bureau office and residence for the bureau chief. As the cab came to halt, I stood in front of what would be my home for the next several months.

I didn’t think that finding a house was that easy in New Delhi. The credit goes to the efficient naming and numbering system that makes the city navigation as easy as finding a dance bar in Kathmandu. The Nepali capital also has similar naming system in place, thanks to the European Union, but it is not as effective as it seems to be in Delhi, whose population cannot be compared with Kathmandu.

Delhi, the capital of India and one of the world’s largest metropolises, is home to some 13 million people, which is equal to more than half the total population of Nepal. The roads are wide; double lane and grand flyovers have been built at several locations to tackle the ever-growing traffic situation.

The situation is only getting worse due to the ever increasing number of cars. Drivers struggle to park their vehicles, and because of the way houses are built (even in planned but old residential blocks) there is hardly any space for parking. Therefore, many people park their cars on the street near their residence. Imagine what will become of the city when Nano hits the road. Nano is the much-hyped ‘Rs One Lakh Car’ that the Indian industrial giant Tata is working on, and which he claims will be the world’s cheapest car.

Uncle Mehra, my 75-year-old landlord, joked that they will need a crane in each colony so that the cars can be lifted and parked on the top of the houses.

If there is ‘thin traffic’ in Delhi, then it has to be the traffic of FM radios. In terms of radio waves, Delhi is primitive compared to Kathmandu. The Indian capital has only 13 FM radio stations compared to around two dozens in a valley of 3,50,000 people. The private stations here cannot broadcast news (only the state-owned All India Radio does that) which might sound monopolistic and grossly undemocratic to a Kathmanduite or any Nepali for that matter. The world’s largest democracy doesn’t allow private radios to broadcast news. I also miss the BBC World Service in Delhi as Kathmandu has a dedicated frequency that brings the BBC brand of news from around the world 24 hours a day.

Smoking in public places like restaurants and offices is banned in India. Since the ban came into effect in October, puffing has become a challenge for many smokers. I was recently in Khan Market with two Indian friends who had to make sure that no policeman was around before taking out cigarettes. They did not flout the rule as they smoked on the street but India the functioning anarchy is not an ideal place for rules to be applied (or followed) strictly. One can see people smoking precisely in those places where it’s prohibited. “Arey, bhad main jaa yaar rule,” (To hell with the rule), said another new friend of mine as he lit his cigarette.

As far as I have seen in the past four weeks, liquor sale is strictly regulated. One can’t find beer or whisky as easily as mineral water in a kirana pasal as is possible in shops across Nepal. I am not much of a drinker but an Indian friend took me to a nearby ‘sharab ka dukan’ in Jangpura Extension. My friend introduced me to the shop-owner as a guy from Nepal. “Arrrey, I worked there,” said the man on the billing desk who remembered his days with a beer distributor in Kathmandu. “Liquor is available everywhere there!” When I mentioned that the government was planning to regulate the sale of alcohol in Nepal, he said, “Then many people are going to lose their jobs.”

For me, trees are one of the best things about Delhi. If put together, they will probably make a jungle as big as our Shivapuri National Park. A quick search on Google tells me that there are several books on the trees of Delhi and one of them, Trees of Delhi: A Field Guide by Pradip Krishen, has received many accolades from reviewers. There are around 252 species of trees in Delhi, said the author, whose wife, Arundhati Roy, is better known to the world. Seems like Delhi has been living with the slogan “ek ghar, ek rukh” (One house, One tree) and dwellers find it hard to keep track of the names. Uncle Mehra who has been living in the three-storey house for the past 55 years did not know the name of the tree that is almost attached to front entrance and is as tall as the building. These trees are home to numerous monkeys that are notorious for sneaking into people’s houses, and as Uncle Mehra recalled, even taking bananas out of refrigerators or attacking anyone who tried to stop them.

A Nepali drama performed by students of GEMS school and Sarwanaam Group at the international children festival of performing arts in Delhi last week highlighted the importance of trees in our lives. After all, we are from a country whose national slogan used to be “Hariyo ban, Nepal ko dhan” (Green jungle is Nepal’s asset). Trees are Delhi’s lifelines, providing oxygen and greenery to its residents in the midst of pollution, traffic and noise. People here still remember the pre-CNG (Compressed Natural Gas) years when the buses and autos ran by diesel and petrol. Now that most public (and some private) vehicles use environment-friendly CNG, the city has become far more tolerable. “It was difficult even to breathe,” said a Nepali who has been living here for the past 12 years. “What you see now is revolutionary improvement [in air quality].” 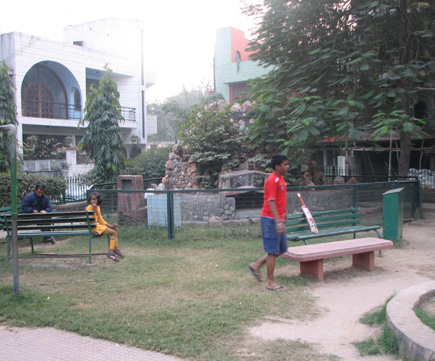 Another hallmark of the city is its recreational parks which we don’t find in Kathmandu. A distinct culture has built around them. People go there to jog, walk around or just relax. Here in Jangpura Extension, every block seems to have a park and the one in my block is guarded by a Nepali from Far West. “My real name is Harka Bahadur but here it’s Shyam Bahadur,” he said. “Deshi le chindaina.” [Deshis do not know my name.] ‘Deshi’ is a term for Indians in many Nepali villages. The Indians whose cars Harka Bahadur washes and whose property he safeguards and who sleep soundly as he stays awake all night call him “Bahadur”. Although it literally means ‘brave’ in English, ‘Bahadur’ sounds a bit derogatory. There are many “Bahadurs” in Delhi and in the rest of India. Nepal’s poverty is to be blamed for this.

(The writer is the New Delhi bureau chief of Kantipur Publications, the publisher of the Kathmandu Post, Kantipur, and owner of Radio Kantipur. This entry was posted on this site on 10 December.)