How? I was lying on my back on the ground of Lodhi Garden Friday evening hoping to count a few dozens stars. Then this idea of going to Taj Mahal struck me. (Pics from last month at LG: One, Two, Three.) I had gone there with Satish. He started lecture about where can trains can take me in India. He also tried to convince me against driving to places like Mathura or Agra (as opposed to train journeys) arguing that I was still not “acclimatized” with Indian roads and traffic system. It was already 8 PM and was decided on that auspicious hour that we leave for Agra in less than 10 hours. I woke up even before the alarm clock that was set for 5 am performed its duty. I think that was the earliest in years. My usual wake up time is around 9 am while 7 am or 8 am are generally early hours for me to get out of bed. I woke up, took shower, put new clothes and was ready for the day. Then I called Satish only to hear from his mother that he has gone back to sleeping after he was woken up at 4 am. I was determined to make the trip happen. So I moved out of home, towards the nearby Nizamuddin railway station to catch a train to Tajmahal, Agra. The Taj Express was scheduled to leave the station at 7:15 am.

Reached the station. After wasting seven minutes at a help desk trying to fill up a form and asking a security guard about the location of ticket counter, I reached there to be greeted by a long queue. It was so long that it seemed impossible to get a ticket before 7:15 am. By some miracles, at about 6:50 am, the queue started moving fast. By 7, I was in possession of a ticket of general compartment. I rushed towards the platform to catch the right train’s right compartment. I was early enough to get a seat.

This boy struggled hard to pass through the crowd. Someone wanted to buy a piece of coconut but there was no place to put the plate. He found one on the knees of a passenger (below). “Sorry bhaiya, hope you don’t mind!” 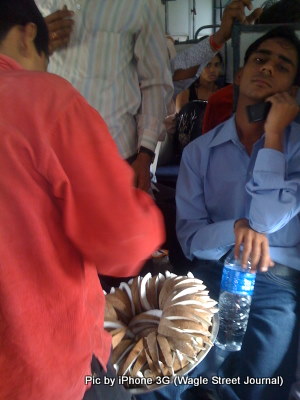 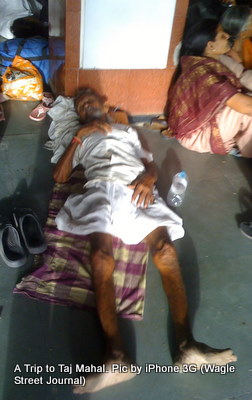 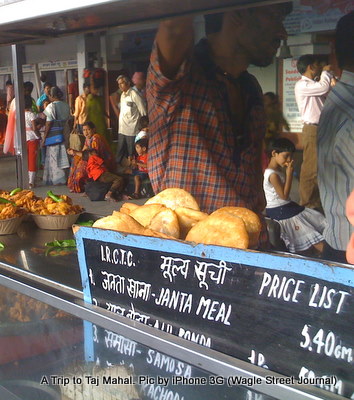 As seen from a moving train. Many wall paintings promised to solve all sorts of sex-related problems. I had seen such advertisements first time in UP, near Nepal border in 2004 when I had visited Vanarasi or Banaras.

A man and his best friend. Near Nizamuddin railway station at around 10:30 pm while I was on my way back.

Indian Rail is a diverse society on the move…that speaks several languages that are not understood by all people traveling in the same compartments of a rail which might appear like a huge reptile snailing if seen from a hot air balloon and eats food that are vastly different from the one that is available in one station to the next. In my first journey in the Indian Rail that lasted for three straight days and two nights, I found myself interpreting on the third day to an Indian yatri what the railway staff, another Indian, was talking about. The Tamil passenger who spoke his mother tongue Tamil and English but didn’t understand Hindi wanted to order some food and the Hindi-speaking Railway attendant from north India didn’t understand English and Tamil. A service of a Nepali came handy and the Tamil heartily thanked me for breaking the language barrier.

Those writers were true, I felt after traveling in the Indian Rail, who had described the IR as the lifeline of India that is like a traveling theater festival that stages contrasting dramas every next hour or so with even more and diverse characters who have their own unique story to tell via their different body languages and other forms of communications. A friend of mine from Jharkhand didn’t believe when I recently told that there are no rails in Nepal (apart from a piece of relic that runs between Janakpur-Jayanagar (India)) covering only a few kilometers on Nepali side. The friend replied: “I can’t imagine a life without trains. How do you live without trains yar?” Unlike America or Europe, India will cease to exist if its railway system that carries a sea of humanity everyday becomes dysfunctional. My personal feeling is that effectively disrupting and completely damaging the Indian railway network will have the same impact that the fall of a nuclear bomb in Delhi or Madras might create. That’s a crazy comparison but nothing more than this can properly highlight the importance of railway network in Indian society, I believe!

Even though I lived so near to India and grew up hearing so many things about its cultural, social and political aspects, it was a kind of shock to me when I saw an Indian railway platform in October in Gorakhpur. Thousands of people were simply lying down, just like that, on the concrete floor inside the platform and outside…below the open sky. I had never seen such a scene before. They were waiting for the next train to come. Apart from the sea the only thing I missed about India after returning Nepal was the rail. Railway is, I feel, the best thing to have happened to India under the British raj. From the toy train of Darjeeling to the faster one like Rajdhani Express, the rails awed me (I traveled in both of those famed trans two month ago while coming back to Delhi via Darjeeling).

So the rails in India awe me more than anything. The way people travel in them, the chaotic, pathetic, and at the same time entertaining and lively atmosphere inside a general dibba (compartment), the manner in which the passengers eat food inside, fill in their bottles from drinking water from public taps at the platforms so hurriedly fearing that the train might leave them behind, the way they talk with each other and with fellow (and strangers) passengers, behave, even sleep and freshen themselves…and the way sellers literally somersault to penetrate the crowd inside the dibba to sell eatables to the passengers…its all amazing! A real cultural shock that is not comparable even to the one that I got in a Washington DC strip bar a few years ago.

Then there is Delhi Metro, another form of rail transportation in the city of Delhi (here is my article about Metro), the multi-billion dollar project that is still in the making which is arguably better than what they have in DC and NY. Traveling in the Metro makes me believe-not that Delhi metro is a piece of Indian innovation- what Tom Friedman argues in his book The World Is Flat in the context of competitive advantage that India has in Engineering and technical education thanks to the famed IITs and all that the days of America in terms of innovation are going to be over soon. Of course, it will be a loooong time before we see that happen in real life.

Next part, photos from Taj Mahal, will be posted soon.