Some people complain while others struggle to make their lives a success. 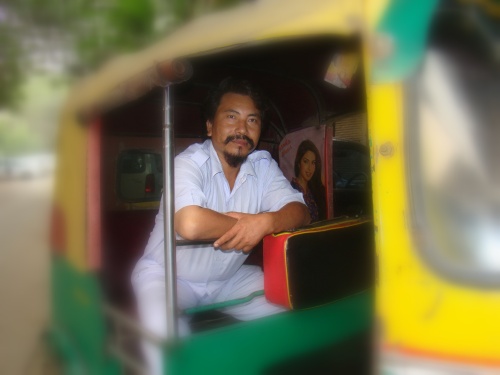 Hom Bahadur Rana from Tanahun, Nepal is an autowallah in Delhi (click to enlarge the photo)

In the hilly north-eastern Indian town of Shillong, music is your identity. More so in the case of a cabbie. What the audio cassette player in your taxi blares says who you are. When I heard Sanjeev Singh asking, “Why did you put chokho mutu tikho chulesima from inside a cab that was parked at an intersection of Police Bazaar recently, I instantly recognised the man behind the wheel.

“Wassup!” I greeted the man in Nepali without being too excited because the Nepali sound wasn’t unexpected in Shillong. This is part of a region that is home to hundreds of thousands of Nepali Indians. The cable network here distributes TV channels from Kathmandu. Some of the Nepalis in the Darjeeling area of West Bengal are fighting for a separate Gorkhaland state within the Indian union while Shillonge like this taxi driver, resident of Meghalaya, are quietly struggling for their own right to live a respectful life without humiliation. Their own sorry state of being a marginalised minority was in a way similar to the tragic song’s theme.

“We live a torturous life here, daju,” said the driver.

He is a Nepali Indian and drives a cab in his hometown Shillong, Meghalaya (India). (click to enlarge the photo)

Meghalaya is a Khasi majority state where Khasis claim to be “the sons of the soil” and exploit resources without sharing. Nepalis are a minority and, therefore, sidelined and deprived of opportunities, he complained. Perils of federalism, I thought. But I sensed he was slightly exaggerating the situation because there’s no atrocity being committed against the Nepali community in the region these days as it was during the 1980s. At that time, thousands of Nepalis were chased away from Meghalaya and neighboring states like Manipur and Assam. It was noted that India had breached the now controversial 1950 treaty of peace and friendship with Nepal by failing to stop and being a mute spectator to the exodus of Nepalis. The driver insisted that Nepalis still had no equal rights, and that they were not represented well in government services.

“Many young people like me have become drivers,” he said. Some of them drove shared taxis, the primary medium of transportation in Shillong, like him while others went out to cities like Kolkata for better options. Ultimately, they return empty-handed as they fail to struggle in those cities that have a different atmosphere and cultural environment. “We are hill people,” he said. “We can’t live in hot places.”

I was amazed, albeit understandably, to see him at so much ease while talking with me in Nepali. It was his language as much as it was mine. The language brought us so close that, at one point in a similar situation the previous evening, I felt my two Indian co-travelers, students of the Indian Institute of Technology Kharagpur, found themselves excluded when I was talking with another Nepali youth on the streets of Shillong. That young man also complained about a difficult life in a state where Nepalis are a minority lot.

Some people complain while others struggle to make their lives a success. They are not discouraged by countless humiliations and obstacles. They keep on working towards achieving their goals despite facing serious setbacks. They keep journeying despite being cheated sometime by their own comrades and on other occasions by fate. This is the story of Hom Bahadur Rana, an autowallah of Delhi.

Twenty years ago when Rana fled his home in Bandipur, Tanahun, he was 15. Unable to bear the torture of her drunkard husband, Rana’s mother had killed herself a few years ago by hanging herself from a tree not very far from home. He couldn’t continue studying, and thought life wasn’t going anywhere. He arrived in Delhi along with a neighborhood dai. Like millions of other migrant workers in India, he went for whatever work came to him. Money didn’t come. He was already dreaming about Bombay. He found a friend in a Nepali guy he met in a farmhouse in Chandigarh. They decided to catch a train to the seashore.

“We had this dream to make it to Bombai,” (that’s how he pronounces it) recalled Rana. “We wanted to see the sea.” They arrived at Old Delhi railway station only to be tactfully looted by a Nepali-speaker who pretended to be going to Bombay. Rs. 1200, half of the total money they had, was gone in a jiffy. Then they were cheated another Rs. 100 by the railway ticketing agent who sold them “seats” in the general compartment. The journey itself was unforgettable. “We didn’t get space to sit inside the dibba,” Rana said. “We went near the lavatory and sat on the joint that connects the train compartments. In the morning, we saw that our clothes had all been covered with feces.”

In Bombay, they were clueless about the destination. They walked up to the sea and wandered around the city until a taxi suddenly halted in front of them. Two guys got out and started beating them. “You Nepalis,” they said as they threw Rana and his friend inside the cab. “Why do you come here? Take out money.” Another Rs. 300 was gone. The only remaining Rs. 200 was hidden inside their collars. “We knew Bombai was a city of looters,” Rana said. “We had hidden some money in our collars. We were forced to take off even our kattu, but they couldn’t find that money.”

Terrified, they went back to the railway station planning to go back to Delhi without a ticket. If caught, they thought, they could at least get free food. There they met another Nepali who, like the one in Delhi, offered help. This one turned out to be genuine, and they found a job. They thought it was a miracle. After a few years of struggle and stints as security guard and painter, Rana was making money. But he lost all his earnings, Rs. 12,000 in total, in an incident that involved one of his friends eloping with his co-worker and the girl’s relatives filing a complaint to the police. He had to leave the job and the city.

But he wasn’t defeated. Coming back to Delhi, he decided to start all over again. He drove an auto, the three-wheeler that is, in a way, the backbone of Delhi transportation. After a few years of working up to 18 hours a day, he bought a small piece of land in Rohini, west Delhi. There he set up a shack, and for the first time in about 10 years, returned home to marry. Three years ago, he finally bought his own auto on installment. Ownership of an auto has given him a sense of liberation. By the end of next year, he would have made all his payments. Then the profits will come. A week ago, when I was in his three-room home, he served me with a cup of milk tea and some cookies.

“A month ago during Dashain, I organised a small gathering here,” he said, beaming. “I invited many Nepalis living in Delhi and served them masu bhat. I had bought a goat costing Rs. 7,000.”

I have met many Nepalis in India as part of my work, but Rana’s story was by far the most inspiring. He was happy except that his wife badly wants a child, and they haven’t been able to produce one. The day I visited his home, Rana had invited a Nepali jhakri (witch doctor) for jharphuk to satisfy his wife.

This article first appeared in the op-ed page of today’s Kathmandu Post.

2 thoughts on “A Tale of Two Drivers: Delhi Autowallah and Shillong Cabbie”