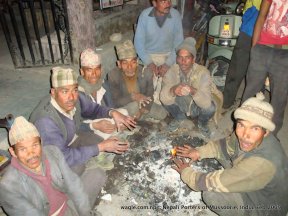 Approaching people, talking to them and composing a story- that all takes effort. Words have to reflect, as accurately as possible, feeling of the people involved in the story. They have to portray pictures of people in such a way that this portrayal properly supplements the photos of the same people that are often printed alongside the story.

I hadn’t expected to bump into a group of Nepali porters in Shimla. However, when I did I wasn’t surprised. I had seen a similar group of people from Kalikot in Mussoorie four years back doing exactly the same thing. I had detailed the Mussoorie encounter and conversations that I had with Kalikotes in a story that I wrote for Koseli (Kantipur). This time, the Nepali men in Shimla were from another hilly and backward district: Rolpa.

Seven years after the end of the “People’s War” and two Maoist-led governments later, one would be forgiven to think that the life-standard of Rolpalis has improved. But the reality is disappointing.

As I noted in a story that I wrote for Kantipur (रुकुम-रोल्पा एक्स्प्रेस- शान्तिकालमा गाउँले जनताको जीवनीका केही झलकहरू) in October 2011, the district Rolpa and the people Rolpalis have ‘a distinct’ image in Nepali imagination. They are the ‘fighters’, ‘terrorists’ or ‘jungalis’ depending who you are (More about this here: @ Rolpa [Libang] photos and journal from my October trip #Nepal). Excerpt:

Therefore I was a bit surprised when I learned that they were from Rolpa. And that they were carrying load from one corner of Shimla to another to make a living. There must be some truth in these whispers in Kathmandu and elsewhere in Nepal that some smart people cleverly used Rolpa and the Rolpalis as a launchpad to propel themselves to the national political scene, international fame and a really good life. The people of Rolpa, on the other hand, continue to struggle as they did before the janayuddha. It just so happened that they suffered the most during the civil war.

A Nepali Migrant Worker (Porter) from Rolpa, Nepal, Listens to the Song Jasle Mutu Chudera Lagyo by Anjana Gurung in his cell phone in Shimla, India.

So in Shimla I was taking photos of the town. Suddenly I heard people talking in Nepali. Then I directed my camera towards them. They thought I was a tourist. They talked about me thinking that I didn’t understand their language. A man stood at a staircase a few steps below the crowd. He was listening to a Nepali song in his cell phone (Jasle Mutu Chudera Lagyo by Anjana Gurung). I started recording him. Then, after a minute or so, I decided to surprise him by asking a question in Nepali: where are you from, bhai? He was surprised but didn’t waste time to show that he was. We talked for about a minute. His friend joined in the conversation briefly before a man speaking in Hindi interrupted us. This guy must have hired these Nepali porters for this afternoon to bring stuffs to his shop from a few hundred meters below.

They walked down. I followed them to take more photographs. This time they smiled for me.

I didn’t interview them. Therefore I don’t know much about them. But I briefly overheard them talking to each other. I also recall my conversation with the Kalikotes of Mussoorie. On that basis I can say that these people, from Pakhapani and neighboring villages of Rolpa, were brought here by the same Nepali social compulsions that had forced the people from Kalikot to go to Mussoorie. Unemployment, lack of opportunities in villages and disappointment with the political class that has failed to meet peoples’ expectations. 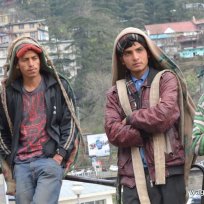 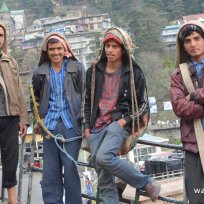