DW: Just before the vote.

As you can see from the excerpt of an old entry below I was super excited about voting and about the election process back in 2008. It was because I believed, as I do now- sort of, those were the ‘historic’ elections for the CA. If same thing happens in exactly about five years, it can’t be as historic as it was the first time, I think. Okay, I am excited today as Nepal votes for a second Constituent Assembly. But I was super excited back in 2008 when the country voted for the first Constituent Assembly.

Read a paragraph from my 2008 Election Day entry:

It was a thrilling experience to vote after so many years. I came to this computer a few minutes ago after casting my vote in the historic elections of Constituent Assembly this morning. I had reached at the polling station in Gandhi Adarsha High School, a minute of walk from my home in Gothataar village of Kathmandu constituency 2, at 6:20 AM. That was 40 minutes ahead of the opening of the voting time at 7 AM. There were already about 50 people in the line! One guy came behind me with his identification card saying: I was eagerly waiting for the morning. My hand is itching. I want to vote! I will be voting after 16 years.

After standing in the queue for 40 minutes I went inside the polling station. There the lines got divided into three sections (six in total for males and females). As a result of this division I found myself standing in the third position! Cool!

Seems like the decline in excitement level was a slow process. It happened over the time- slowly. As things remained the same more or less around my life- as a citizen, politically speaking. For example, In 2011 while registering with the Election Commission I was a bit more excited than I was today and a less excited than I was in 2008. Here’s an entry that I wrote detailing my experience of registering myself with the Election Commission in 2011. 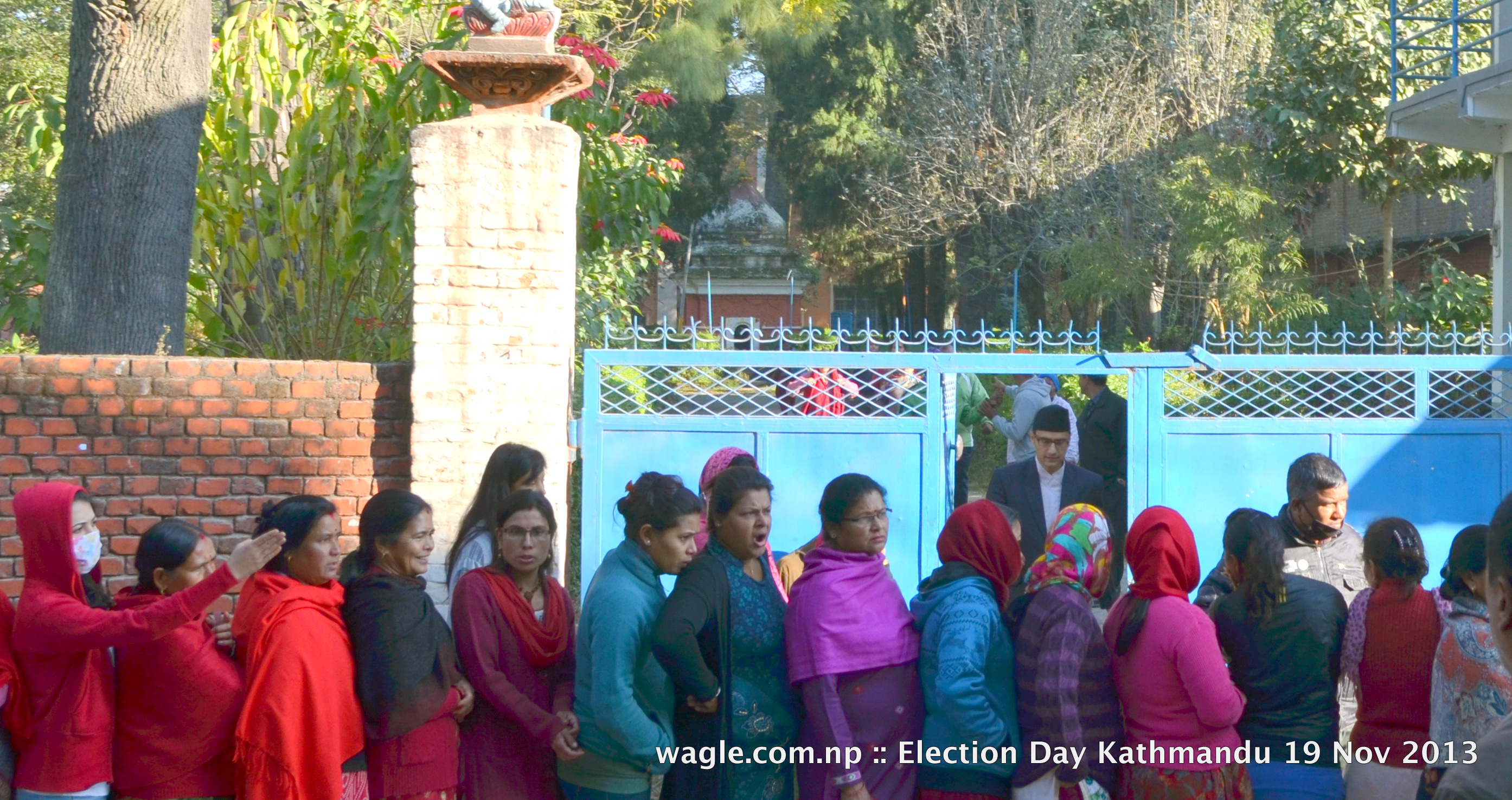 Coming out of the polling station.

END_OF_DOCUMENT_TOKEN_TO_BE_REPLACED 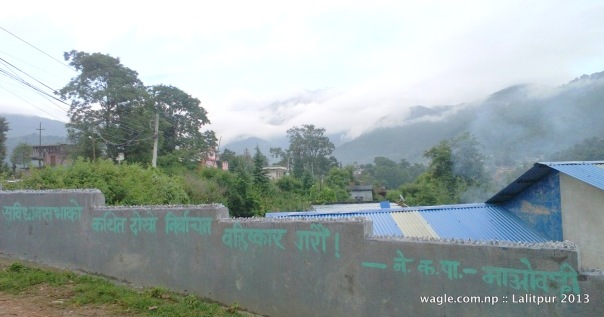 Mohan Baidya-led CPN-Maoist, the ultra-left faction that split from the United CPN Maoist, wants us to boycott the second Constituent Assembly polls slated for 19 November 2013. Personally I don’t agree with their call though I respect their right to not to take part in the electoral process. However, as an eager voter, I am against anyone who wants to disrupt elections. 12 Aug ’13. 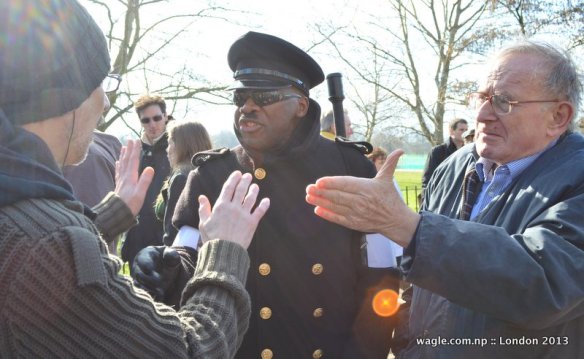 The man in the middle had brought a list that he said police had prepared and contained many ethnic groups/nationalities including Nepali of the world. He argued that those on the upper part (white Europeans) received favorable treatment from police than those that are at the lower part of the list. James (not seen) believed the man was wrong. About 10 minutes later I saw the man on left chatting with James and, at one point, he tried to include me into their conversation about international banking asking what I felt about it.

So the Speakers’ Corner hasn’t been deserted after all. After I posted an entry on the place portraying it as an empty place James (call him Sir James or James Chambuwan 😉 ) suggested me to go there on a Sunday afternoon. That’s what I did and, lo and behold, there was another James, slightly taller than the one who suggested me to go there, I must admit, talking animatedly about various crises in the world but mainly focusing his lecture to European affairs. A few middle-aged men surrounded him as he continuously spoke, leaving little chance for others to interrupt, moving both hands and his whole body furiously and occasionally jumping a few inches from the ground (or may be just raising is both ankles) to make a particularly important point. Some of his listeners were trying their best to interrupt him, correct him and to counter and add their own views to what he was saying.

James the Speaker of the Imperial College, London (a student of Chemistry who plans to go into finance and politics- finance more likely than politics, he admitted- in future and thinks it’s good to be grounded in pure science while making career in one of the aforementioned areas) was one of about seven speakers who were END_OF_DOCUMENT_TOKEN_TO_BE_REPLACED

Bharat Bandh happened on 5th July. The following is a part of an article that appeared in the Kathmandu Post yesterday. The first part of the article, available here, is about the India that is rapidly modernizing. Indian democracy is dictated by the flourishing middle class, says a professor.

So you thought bandas solely belonged to us Nepalis? India saw a Bharat Bandh (the spelling used here) last week in protest against soaring inflation and rising prices in recent months. As it happens with many Indian things, this also got world attention. The term “Bharat Bandh” was the top topic trend on Twitter on July 5 meaning most Twitter messages posted that day were related to the Indian strike. Many opposition parties including Bharatiya Janta Party and Communist Party of India (Marxist) had called for a strike that would affect normal life and economic activities throughout the country. But India is too huge be completely banda (closed). It was just like a normal day in large parts of Delhi while protestors demonstrating in other parts disrupted the Metro rail service for several hours at some stations. Public buses, many of them operated by the Congress-led Delhi government, were on duty as were the privately run auto-rickshaws. Mumbai, the ultra-rightist Shiv Sena’s bastion, was perhaps the most affected. Delhi where the ruling Congress party is strong was less affected. Many shops remained closed in some markets, but many others were doing business as if it was a normal day. Even a cinema hall, newly opened Eros of Jangpura, was running shows without any sign of Bharat Bandh. I went there to watch a movie called “I Hate Luv Storys”. I loved the fact that the theatre was open during a banda, which is unimaginable in Nepal. But I hated the movie.

The young man is from Dr. Bhattarai’s constituency in Gorkha district

It was the hottest June day in five years, Delhi boiling at 45 degrees Celsius. I was waiting for someone at the international airport. There I met him. He had gone there to receive one of his relatives from Kathmandu who was supposed to stop overnight in Delhi before flying to Moscow the next morning (He had a 16-hour long transit). That didn’t materialise. The traveller wasn’t allowed to go out of the airport. We drove back to the city centre together.

“I have been living in Delhi for the last four years,” he said. “India is the best place for a Nepali like me who doesn’t mind working hard for a living.”

There’s no official data but there are estimated five million Nepalis living and working in India. Vast majority of those who work do so in unorganised sectors: security guards, cooks/waiters and other lowly positions in private and government institutions. There’s no reason to complain for the poorest country in the region that has miserably failed to create jobs for its citizens.

Sujan Lamichhane came to Delhi to work as a peon in a private office three years after finishing his school. He worked as a waiter in a restaurant in Kathmandu for some years before coming here. The man from Gorkha district admitted himself in a college in Delhi while he continued with the job as peon. END_OF_DOCUMENT_TOKEN_TO_BE_REPLACED

Just as our April 2008 poll verdict, this Indian election, it appears, was about stability and progress of India

By Dinesh Wagle
Wagle Street Journal Here is the PDF version of the page.] 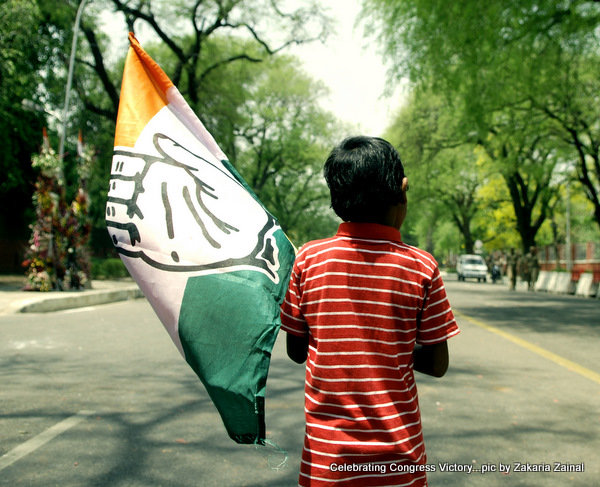 A kid, carrying the Indian National Congress Party flag, walks on the street in front of the Congress headquarters in New Delhi on the day of the counting of votes of the month-long parliamentary elections. Congress emerged as the single largest party with more seats than it got in 2004 polls. Pic by Zakaria Zainal

One thing that provides India with the world’s, particularly the West’s, trust and respect is its virtually stable and reasonably functioning democracy. Like in Nepal, votes can still be bought by a glass of drink in many parts of India and millions don’t cast their vote but vote their caste. And many don’t even care about the democratic process. They ask a brutally simple question: “How does it matter to me who wins or loses?” Therein lies a challenge to all democracies all over the globe: indeed, how to attract people to the decision-making process and make it more inclusive? But still democracy in India is a matchless outlet for people to vent their anger, dissatisfaction, frustration and, at the same time, express their desires, aspirations and dreams. END_OF_DOCUMENT_TOKEN_TO_BE_REPLACED