I am working on photos from my Manali trip that I hope to post tomorrow. Meanwhile, I share with you a page (or two?) from my Meghalaya diary. A version of this article, in Nepali, first appeared in Kantipur daily (मेघालयका “घरज्वाइँ’हरु). First, second and last paragraphs of this article have also been used in a piece that I wrote for July 2010 issue of Himal Southasian magazine (Dakhar still)

Kul Bahadur Magar, his wife Deng and their children.

Marriages, history shows us, are often tactical arrangements between rulers to expand empires, strengthen political alliances, establish peace between warring nations, avoid wars or create harmony in a conflict-ridden society. The Romans did it, the Mughals followed suit, and Nepal’s rulers were no different, in the seventh century marrying off Princess Bhrikuti to powerful emperor Songtsan Gampo of Tibet. Similarly, in the eighth century, King Jayadev II of Nepal brought home Rajyamati, daughter of Harshavardan, the king of Kamrup, Assam. 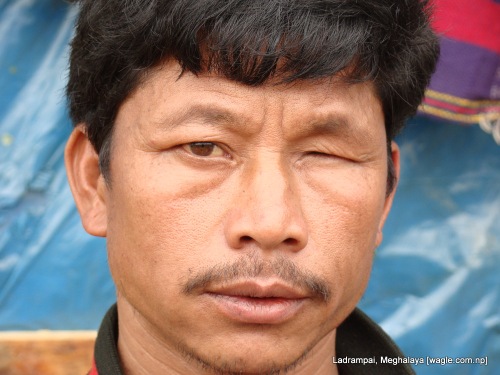 In contrast, when Kul Bahadur Magar, a Nepali coalmine worker in an area of Meghalaya that borders Kamrup, married Deng, a local ethnic Khasi woman, he did not have lofty goals of alliance building or peace-making. “Who thinks like that?” asked 45-year-old Magar. “I liked her, she liked me. We were both young and one day we married.” That was 13 years ago. Since then, the couple has been living peacefully in a shack with their four children, near the coalmine where Magar works. But their peace has now been shattered. The simmering mistrust between Nepali-speakers and the local Khasi community erupted into full-scale conflict during the course of May. Several Gorkhas (Nepali-speaking Indians) and migrants from Nepal were killed, the tragedies highlighting the constant vulnerability of both categories of Nepali-speaking residents of the Northeast. (Khasi Nepali Ethnic Conflict in Meghalaya, India)

Two years ago an ethnic conflict arose in a small town called Barsora in East Khasi Hills district of Meghalaya, a north-eastern Indian state. The Khasis who are majority in the state that has other indigenous communities like Garos and Jaintias, started evicting Nepali migrant labourers who toiled in the coal mines there. A group of leading Nepali migrants from Ladrampai, the commercial hub of neighbouring Jaintai Hills district, went there to hold talks with the locals. Locals had four complaints against migrants: 1. You steal our jobs. 2. You consume alcohol and crate nuisance at public places. 3. You are involved in terrorist activities. 4. You marry our women and help destroy our culture. END_OF_DOCUMENT_TOKEN_TO_BE_REPLACED