But I have decided not to jump again. I still wonder why people say they enjoyed jumping from the 160-meters-high bridge. All pics by Suraj Kunwar

Am I an adventurer? No need for any such questions. I am, of course. I love traveling, wandering, trekking, going up to a hill and descending back to the plains. I love hiking alone, walking in a group and I love camping and what not. If these activities are not enough to prove my venturesomeness, fine I don’t care. But I have decided, for once and all, I will never do the Bungy or Bungee jumping again! That is, not AGAIN which means I have done that! The jump that I took on Monday, May 7, 2007 was terrible. Not that I crashed down on the George of Bhotekoshi river but the whole experience was so scarier that I am still afraid of even thinking about jumping.

Until about 15 minutes before jumping, I was super excited about the free falling. I didn’t hesitate to pay Rs. 1200 (after the manager gave me 50% discount) to experience the adventure. As I headed towards the jumping pad, I started feeling nervous. Am I really going to do this? Am I not kidding?

I almost pulled off on the last minute. I thought I would die if I did jump. Suraj Kunwar (my reporter friend in Kantipur daily who had gone to Bhotekoshi along with me to cover the jumping by blind folks of Kathmandu) had earlier told me about the story of how a female TV VJ backed off on the last minute. I didn’t want to be male counter part of the lady, did I? No way. I am a man of courage, I told myself. I have to take this jump since I have already come this far. Bungee instructors are about to tie the rope on my legs. I hurriedly pushed the fear aside and prepared myself for the jump of my life.

This is about life and death.. loose fitting means you are gone!! 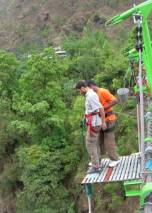 It was so difficult to stand at the edge

Only I know how terrible I felt..at this moment! 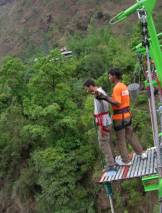 The man gently pushed me… 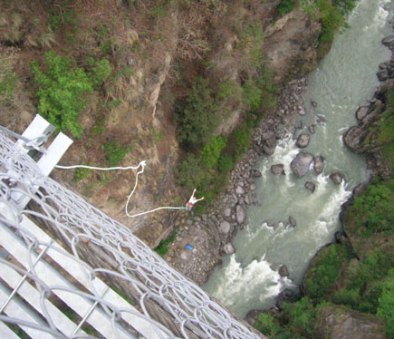 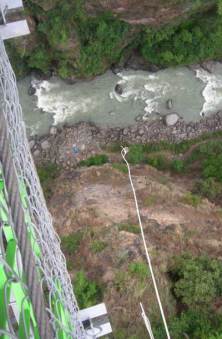 Its all rope to be seen..now 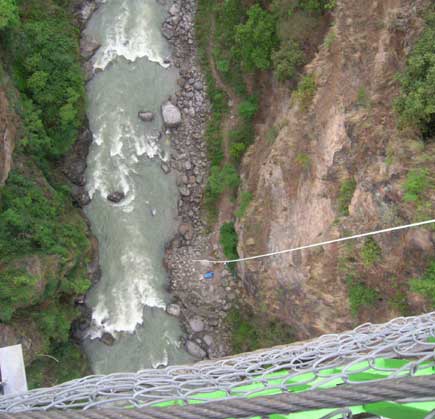 But I and my body were different entities altogether and there in lied an irony. I had decided to jump and was about to jump but, at the same time; something inside me was too afraid to go at the end of the jumping board. I was scared to stand tall and spread my hands as the Bungee instructor told me to do. You are about to fly, dammit. The Bungee instructor was telling me move towards the edge. No, I wasn’t budging. I couldn’t move an inch. After a lot of courage, I managed to push my feet a few inches forward but my body was bending backward. I was terrified like a rat under a sudden attack from a cat. I was there to jump, to show the world that I was an adventurous guy who wasn’t afraid of nothing and yet I was scared to even going at the edge of the jumping pane.

Finally, I managed to reach at the tip of the jumping board and forcefully smiled at the camera on the left. The camera, I thought, must have captured the terror on my face. I said bye to camera in a voice that was hardly audible to my ears.

Then I felt a swift force on my back, perhaps the Bungee guy was slightly pushing me on the back. And at that moment I found myself going down suddenly. I threw myself down. I can’t still believe that I went down. That was scary. Really scary. At that very moment I felt as if my heart had suddenly gone out of my chest. My heart, where do you go? I had planned to create hevulla lot of noise (hui, ha ha, hurrey) but as I went down no sound came from my mouth. I was a horrified kid.

As I was going down, at the rate of God knows how many miles per second, I felt the skin of my face came together at the tip of my nose that, for some, is already too long. I feared people at the bridge noticed that. If they did notice, I thought, it would be so embarrassing. I also thought, as I was going down, people would see me crying and screaming because of my skin amassing at the tip of my nose. God, how would I look if that happens? Later I asked Suraj if he noticed any change on my face, on my horrible face. He said he didn’t notice anything unnatural. “You were fine and normal,” he told me and that was a big solace. “You jumped very well.”

I jumped very well? Are you kidding, I asked Suraj. I also thought I jumped the wrong way- head up and legs down. In normal jumps (or in Swing) that’s the way it should be but not in Bungee. Your head should go down first as legs are tied to the rope that is fastened to the bridge. Jumping the wrong way might put you in difficulties as you reach the point from where the rope starts pulling you back to the bridge. The body will experience sudden jerk at that point which will ultimately make heads down and legs up. I had seen one of the blind men going through the same situation. But Suraj repeated that I had jumped the way I should have jumped. But the whole experience was so weird.

I still wonder why people say they enjoyed jumping from the 160-meters-high bridge.

After you fall and feel the initial jerk you will find yourself pulled up towards the bridge. Your heart, which you feel is already not in there between the lungs, will go out again from your body. The ultimate suspension. Fucking up and down and up. And down. At that point of free falling, as the rope was taking me towards the bridge, I remembered the solemn promise that I had proudly made to my friends on the bridge: I will scream and create the loudest sound possible (hui). I have done that probably a second or two ago: not because of my promise. I had actually screamed out of fear. That had come automatically, not because I wanted to fulfill my promise to myself. But I screamed again, this time to feel that I was in control of myself, to assure that I was still hanging somewhere between the bridge and the river. Hanged at the middle of nowhere. The head is spinning very fast to slow and finally it becomes almost motionless. I opened my eyes. The gorge was moving like a fan in full swing. So was the Bhotekoshi river below me. As I was hanging upside down, the view was definitely different and that forced me to close my eyes.

[The story about blinds jump in the Kathmandu Post which also appeared in Kantipur in Nepali: It was the biggest jump of their lives and they accomplished it as if they were pros. We are talking about four visually impaired but daring Nepali youths who went bungy jumping. In doing so they set a national record Monday, while jumping from a 160-meter high suspension bridge over Sindhupalchok’s Bhote Koshi River. (continue reading)

Finally my body came to rest, almost motionless. Then I felt the rope tied on my legs. The rope, only the rope, was keeping me there on air. Instead of being thankful to the rope and being confident about not falling, a weird thought came to my mind: My legs will somehow get out of the knot and I will go straight down. What the hell are you thinking? I asked myself and consoled that the knot wasn’t going to get loosened. You will be fine my boy, just try to enjoy the show.

Hell with the enjoyment. I was terrified. I was regretting the decision to jump. I must have stayed there, motionless, for less than a minute but I felt like I was trapped in the sky for about an hour.

As I was struggling with my fear I felt I was going down slowly. The rope was moving towards the river. Good, I told myself, you are not going to die. Just be quiet and close your eyes. I closed my eyes but after a few seconds couldn’t resist the temptation to get the view. I saw two folks down on the bank and one of them was giving me bamboo (?) that I instantly grabbed as I reached near it. I descended. The man grabbed my head and pulled me towards the ‘bed’ where I lied down as he and another person untied the rope. And I felt a sudden pinch on my neck at the very moment. “Hey man, how was that?” one of them asked in English. “Ma ta Nepali hun hai dai. Bachiyo, tesaima khushi chhu,” I responded. [I am a Nepali, bro. Happy to be alive.]

“He, he, ma ta dari ra aglo dekhera Israeli po bhanthaneko,” he said. “Hya, marne ta kurai hunna ni.” [He..he.. I though you were an Israeli because of your beard and height. There is no possibility of dying.”

I was trembling and screaming God, God, God continuously as I woke up from the table and went a few meters away and surveyed the height. God, God, God. What did I just do? I couldn’t believe myself that I did jump from over there. That was so awful. I will never do it again, I promised. After a few minutes of taking rest, I started climbing the hill, towards The Last Resort, the resort that operates the Bungee jumping.

I shared my experience and offered tea/coffee to some of my friends to celebrate the successful but scary free falling. I turned out to be lucky because the manager refused to take the discounted amount: Rs. 1200 since no other reporters wanted to fall.

It was time to get back into the bus and cross the bridge again. As I approached the jumping pane, at the middle of the bridge, John Lennon was blaring in my iPod. What a coincidence, he was saying: No hell below us.

[WSJ Note: This blog is second of four part Excitement Blogs series. I am hoping, but not very much sure, to post other series if I get time from reporting and writing for newspaper. Then I will digitize my Karnali journal from my notebook. Meanwhile read some of my reporting and other stores from the region on UWB.]

1. In A Nepali Village of Daura Suruwal, Young Generation Wants Jeans
2. A Radio Report From Jumla: Information Revolution
3. A Young Jumlee’s Dream of Teaching
4. The Karnali Express: Bumping on for 52 Hours (Jumla to Surkhet)
5. Hari Bahadur Rokaya Up Close and Personal
6. Job in Nepal Police, Duty in a Corner
7. Up to Rara Lake with Dohori Dhun All the Way
8. Remote Nepal Speaks: Young Voice of Karnali
9. A Different Alchemist: Himalayan Yarns of Nepali Shepherds