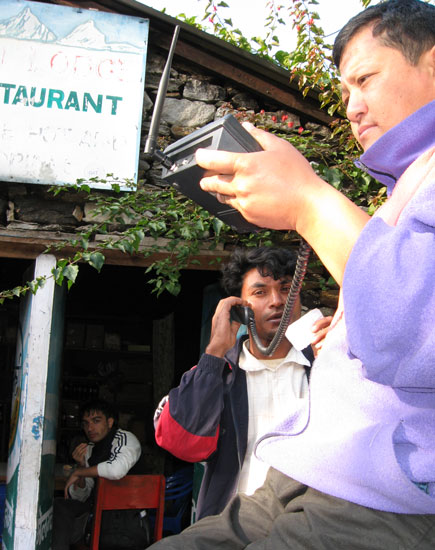 A hotelier in Timbu village of Helambu region holds the pre-paid CDMA phone set for better signal from Kathmandu valley while a customer talks. (Click to enlarge the photo and sketch.)

21 October (Timbu): With the introduction of CDMA-based phone systems by Nepal Telecom, Nepali villages have experienced a revolution in communication. Even in some of the most remote parts of country like Kalikot and Jumla, people are now carrying cell phones that run on CDMA platform. Code Division Multiple Access or CDMA wireless phones are not only affordable but also have wide area of coverage. They work almost everywhere in the country, even in remote places where the GSM cell signals can’t reach. 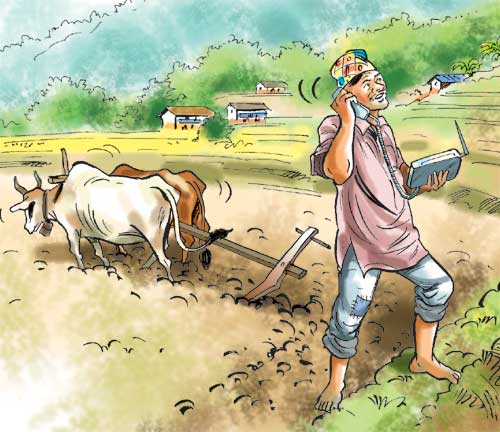 Nepal Telecom has distributed four types of CDMA phones in Nepal: pre- and post-paid wireless lines, pre-paid cell phones, and pre-paid cards for laptop computer. I am suing post-paid wireless set in home and the laptop card while my brother uses pre-paid cell phone. The most attractive part of this technology is the strength of coverage (compared to GSM mobile) in rural areas. Even the signal from a tower in Kathmandu will cover places like Helmabu.

There was a report in Kantipur a few days ago from far western region that even farmers are using CDMA phones on the field to talk. The report said that oxen often run away from the field as the person who ploughs becomes engaged with the phone! (sketch by Dewen via Kantipur)