Clear View of Himalayas from Kathmandu

First the GK: Kathmandu is the capital of the country that is known around the world as the Himalayan Peopledom! But not always we see the mesmerizing Himalayas from the valley of Kathmandu though the Himalayas serve as our geographical borders with China. Because of the poor atmosphere that surrounds the valley most of the year, Himalayas are hidden behind the hazes of clouds and mists. That has changed in the past couple of days. The ugly haze over the hills (for some they are mountains!) that surround the valley has disappeared. We are having spectacular views of snowy mountains from the Kathmandu valley. Just look, where else, northward and you will be greeted with the long range of smiling White Mountains.Pics by Wagle unless otherwise stated. 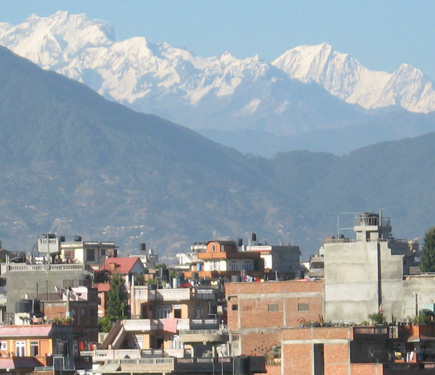 News-photographers are delighted and the Himalayas have hit the front (or other) pages of Kathmandu newspapers. Photos are taken from several angles and perspectives. I have seen some unpublished photos as well. Some of those photos, taken during the evenings, display the illuminating city at the backdrop while the mountains are seen glittering at the top. In today’s issue of Nepal Magazine, veteran photojournalist Chandar Shekhar Karki presents two photos in his column that provide two different views of the mountains: one taken from above the cloud and the other taken from under the haze. Obviously, the second one is a disappointing view compared to the first. 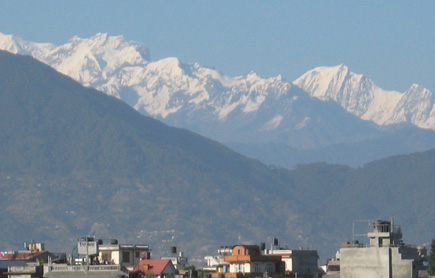 Some photo captions have suggested that this clear view is because of the devastating cyclone in the Bay of Bengal. This might not last longer. Kathmandu hasn’t done anything to reduce air pollution and until two days ago the city was stinking everywhere because Metropolitan office had stopped disposing the garbage. That was because of the locals of a place called Sisdol didn’t allow the Metropolitan vehicles to take the garbage. Now the problem appears to have solved but there is no guarantee that we will be doing away with the problem of pollution.

That’s really the problem to worry about but right now I just want to enjoy the view. The sight of the Himalayas from their homes, office buildings and commuting buses makes people feel good. At least I become elated whenever I glance towards the mountains and get the appealing view.

From above the clouds and below clouds. Pic by Chandra Shekhar Karki via Nepal Magazine