This stunning statue of a bathing lady was standing in a park near the Khajuraho bus stand. click to enlarge 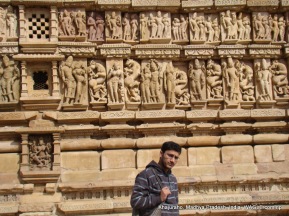 Man at work: near Jain temple

A sculptor at a souvenior shop near jain temple

This stunning statue of the bathing lady was standing in a park near the Khajuraho bus stand. 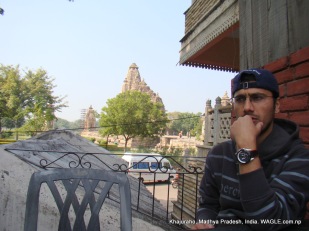 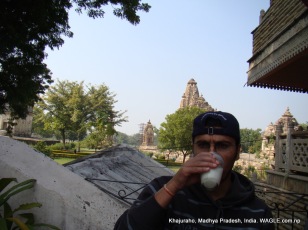 At the rooftop of Raja Cafe, Khajuraho

Everyone wants to caputre the carvings, sculptures and statues in Khajuraho

Finally, I relented. He is giving me a head massage right at Dashashwamedh Ghat

You have to be a local or an expert haggler to survive in Varanasi. If not, a rickshaw-wallah will sell you right there, on the street as you stand, to another rickshaw-wallah! Almost all tourists have to go through sometime torturous and unending offers of all kinds from touts, wannabe guides and rickshaw/autowallahs. Those offers include shaking hands with them, to let them massage you right on the busy ghats, to tip them for nothing significant and to go with them around the city. The moment they realize you are not from the city, they are after you.

END_OF_DOCUMENT_TOKEN_TO_BE_REPLACED 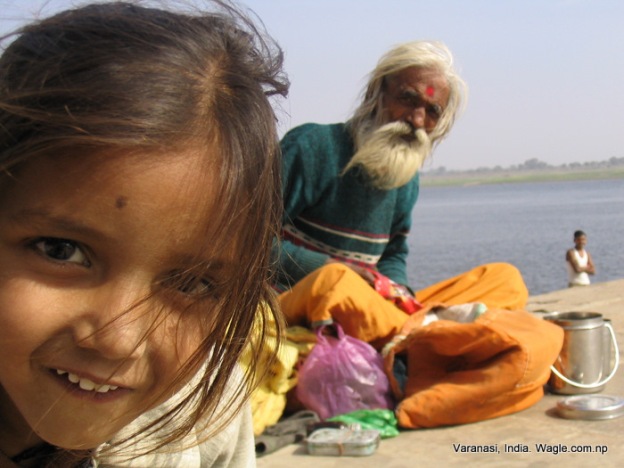 A peek into their eyes: At a Ganga ghat in Varanasi.

My visit to Varanasi five years ago was first in many aspects. That was my first India trip, my first visit to any city outside Nepal. That was my first encounter with the Indian crowd, the intense and chaotic city life that can’t be seen in Nepal. Most of the things appeared to be larger and louder. The river Ganges seemed to be slightly bigger than the Indian Ocean of my imagination. I hadn’t seen the sea. END_OF_DOCUMENT_TOKEN_TO_BE_REPLACED

There's a small pond inside the Kamakhya Temple complex, Guwahati. (Photo gallery inside)

I took a train to Guwahati from New Jalpaiguri. I had come there from Sikkim in a bus in a near-five hour journey. The bus ride wan’t very enjoyable as the road was curvy and I feel dizzying in such trip. Glad that I didn’t throw out. Waited for a couple of hours in the NJP train station eating and charging iPhone. A Nepali couple, just married I assumed, came to my table. Initially I thought that was just another Indian couple heading for honeymoon or something. I had to wait until they talked. I just listened to their conversation for a few minutes. There was no alternative in fact as my phone was plugged in and was being charged. And the food was there at the table. END_OF_DOCUMENT_TOKEN_TO_BE_REPLACED

No Phelps: At the Pichola lake, Udaipur.

Udaipur’s the destination of our tour. We are taking train to Delhi in the evening. We went around the city. I liked the place as it was small, cozy and vibrant.

City at the bank of the artificial lake. The palace in the middle of the lake has been turned into a luxary hotel

Parts of the lake as seen from the rooftop of the hotel where we stayed. 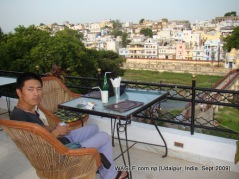 Xu Jie, the Chinese traveller, at the rooftop restaurant of the hotel

Kids plunge at the Pichola lake

Not far from lake Pichola is a Thamel like tourist lane. We stayed at the other side of the lake.

Xu Jie, the Chinese tourist, writes at the wall of the postcard shop after buying postcards. He said he wrote something good about the shop and the art!

Ren shi nin hen gao xing? That’s Mandarian for ‘nice to meet you’ accordign to a site. But not sure what Xu wrote on the wall there. Seems like some piece of art to me though!

There are several hills like this one around Udaipur

Like all other major palaces of the region, this is huge 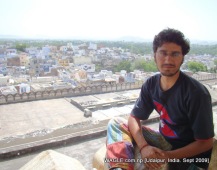 As seen from the front of the City palace 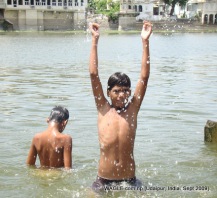 It was very hot when we were in Udaipur

A sadhu washes out 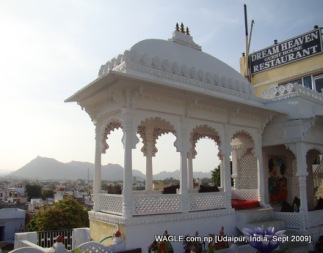 Rooftop of the hotel where we stayed. It’s comfortale over there and folks spend hours to enjoying the view and some okay type food.

We arrived in Jodhpur early in the morning from Jaisalmer. Xu Jie is having tea in a chai shop near the railway station.

At a tea shop at the Jodhpur railway station. The touts, autowallas and agents working for hotels make visitors go crazy by their offers

A traveller awaits bus in Jodhpur to go to Udaipur

Xu Jie takes nap in the bus on way to Udaipur

Near the Pichola lake, Udaipur

Here are the tweets that I started posting as I left Dharmashala for Jammu via Pathankot. Tweets stopped as I entered Jammu because there’s no internet service via phone in Jammu. The pre-paid phone connections didn’t work at all.

A lady on her way back home from the Vaishodevi pilgrimage. I didn’t go there as my mood was totally ruined by the guest house environment and the possibility of carrying the luggage on the 12 km hike up to the temple. There were more reasons than this but primarily my swinging mood. I was surprised that I didn’t go! END_OF_DOCUMENT_TOKEN_TO_BE_REPLACED

And today we are back in Delhi. It was around 20 hours train ride from Bandra, Mumbai to Nizamuddin. It was ok and we were all tired. We are super tired. It was not a particularly long journey but it was a whirlwind. Coming back to delhi was like being in the frying pan again as it was hot here 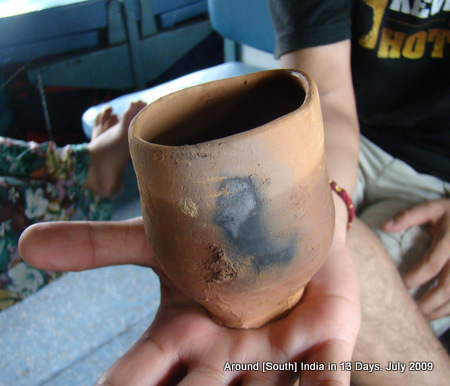 The trip, like chai, is over, pals. We were somewhere in Gaziabad, not far from Delhi, when we took these pictures. END_OF_DOCUMENT_TOKEN_TO_BE_REPLACED