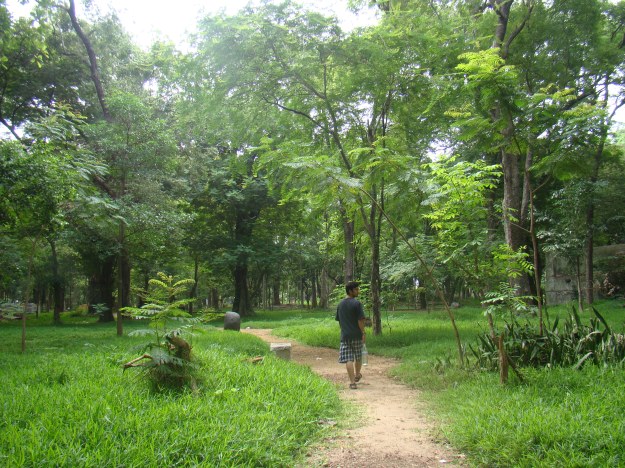 Pondicherry has one of the oldest (1828) botanical gardens of India.

The British once ruled the Indian subcontinent (except Nepal, of course) that included present day India, Pakistan, Bangladesh and Sri Lanka. But they were not the only foreign powers to rule India. The Portuguese and the French controlled Goa and Pondicherry, located on two opposing coasts of India. Having visited Goa (west coast) twice I always wanted to go to Pondicherry (or Puducherry)- sometimes described as “the French Riviera of the East“.

I haven’t been to the French Riviera but didn’t find Puducherry the town up to my (and my co-traveler’s) expectation. We had expected the place to be very calm, without much traffic, touristy, romantic and better than Goa. It is not entirely so. But the rocky beach where French and British once killed each other for the control of Puducherry looked nice- far better than Marina. We spent couple of hours there in the evening after returning from Auroville where golden metallic Matrimandir is the center of attraction. But we found a huge banyan tree nearby far more grander and mesmerizing then the man-made structure. (More about the banyan tree and photos later). The botanical garden near the railway station is a nice place to be for a while though it’s not exactly a garden. It’s kind of an orderly jungle with trees of various kinds. Unfortunately no nameplate could be found attached on all of them. END_OF_DOCUMENT_TOKEN_TO_BE_REPLACED 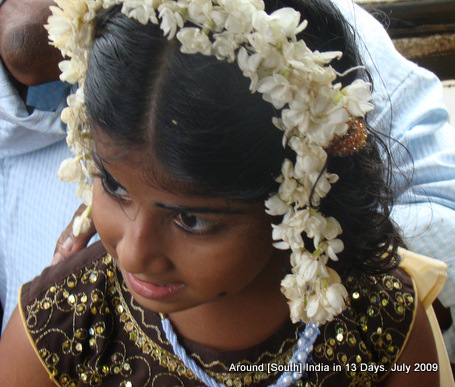 The south gate of the Meenakshi temple.

July 6: We arrived in Madhurai @ 11 am in that part adventurous, part torturous train journey and headed directly to the Meenakshi temple where I had visited during my last trip. This time more photographs, more angles.

And more Dhoti too. This time I bought the authentic Dhoti that replaced my trouser right in the shop in front of the southern gate of the temple. Last time, it became known after I reached Kathmandu, that the Dhoti that I had bought was not really a dhoti but only a part of it. Phew, there’s a small story behind that and I’ll tell that here some day. But today it’s the real, 4 meters long Dhoti with colorful strip. I am wearing this as I am seated in a Tamil Nadu govt bus that is climbing up to the Kodaikanal hills. As the Lonely Planet guide book says it feels good to wear Dhoti and have cool air blown from between your legs in this heat (which is, however, nothing compared to what it is in Delhi). END_OF_DOCUMENT_TOKEN_TO_BE_REPLACED

My last trip to Kanyakumari, Rameshworam, Goa journey. And the first Indian Rail and beach visit. I’ll put the rest of the photos of that trip-October 2008- soon and some of the snaps are strikingly similar.

As seen from inside a moving train. That’s my hand

It’s 1:7 am, and as it happens with me most of the nights, I am awake. It’s not because of insomnia though. I am tapping this entry from the upper berth of the train Kerala Express that must be running somewhere in Madhya Pradesh right now. After having dinner at around 8 pm, I had slept at 9. When I woke up at 12 midnight, I thought it was already morning. I was thinking too much. END_OF_DOCUMENT_TOKEN_TO_BE_REPLACED