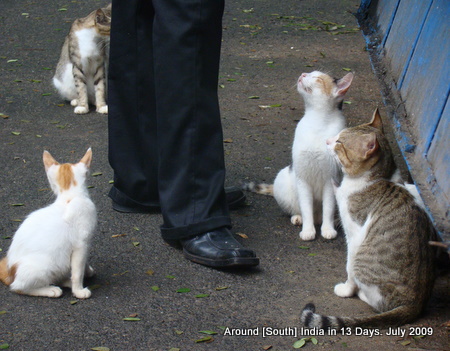 In front of a chai pasal (tea shop) in Fort Cochhin

Initially, at the time of leaving Kanya Kumari (on Saturday, 4th July), the train was virtually empty as it originated from that station. So we thought the whole thing belonged to us! The ‘fact’ that the train was carrying only three passengers, namely Gokul, Ishwari and Dinesh, made us feel special and free. So, using that freedom, we started wandering around, one compartment after another looking for the best seat available. We also wanted to charge the camera battery. That was primarily in our mind while selecting the seat: to have a functional charging point near the seats. The man who issued the ticket had told us that we could seat anywhere in the Sleeper Class as we had the unnumbered seats reserved for us. END_OF_DOCUMENT_TOKEN_TO_BE_REPLACED 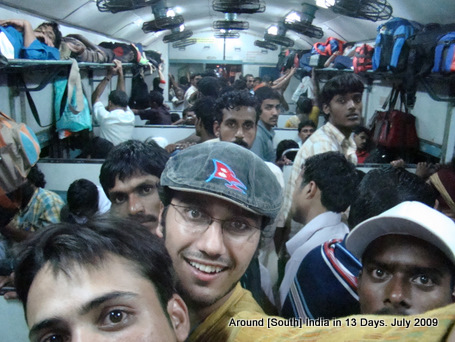 Most of the pics were taken by, who else, Ishwari

July 5/6: Wow the real and full fledged feeling of the general dibba (compartment) in the Indian rail was experienced in this 11 hour partly adventurous, partly torturous journey. The train arrived at the dot but with all general dibbas filled to their capacity and far beyond. It was impossible to board the train from the last compartment (general dibbas are either at the front or the rear end of the train). Then we ran towards the front one. To make things worse, it was pouring and the general dibba was far from the shade. We reached the door only to see a massive crowd inside. No place to put a leg. It was a do or die situation. I jumped over a man’s leg and forced myself inside like a hammer. It worked. I paved a small but crucial way for my travel mates. END_OF_DOCUMENT_TOKEN_TO_BE_REPLACED 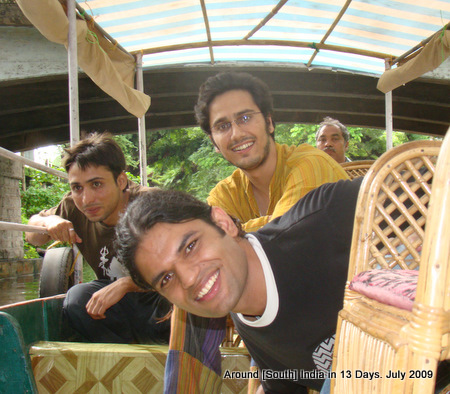 Never heard that term until two weeks ago and today I feel this is one of the most memorable things I did until now. It was soooo much fun, to go around the canals after canals on a motor-engine run boat and observe the life around. I thought the boating would be done in the SEA itself. No, that wasn’t the case to be. The ‘house-boats’ (boats carrying hotel-like rooms and other facilities) were nice attractions of the trail.

Yesterday we stayed in Fort Kochhi, near Ernakulam and the place was small, very quiet,touristy and of course beautiful. The place where we ate dal/bhat was the best attraction with full marks to the owner of the eatery. END_OF_DOCUMENT_TOKEN_TO_BE_REPLACED 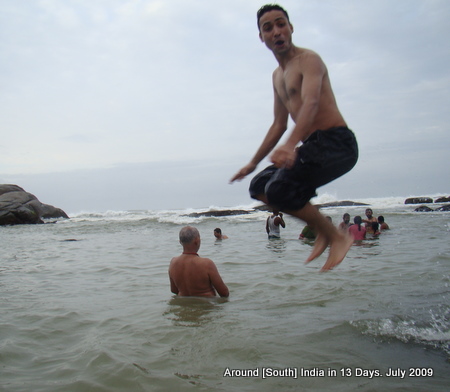 Okay, that’s Gokul trying to touch sky or something over the sea

My last trip to Kanyakumari, Rameshworam, Goa. And the first Indian Rail journey and beach visit. I’ll put the rest of the photos of that trip-October 2008- soon and some of the snaps are strikingly similar.

A video of DW blowing Shankha in Kanyakumari:

Plans, in fact, changed. We came directly to Kanyakumari today, instead of what was originally planned and amended subsequently. We got off the Kerala Express in Trivandram, the final destination of the train. Then we took another train- coming from Bengalore- to Kanyakumari. We arrived here at around 5 and headed directly to beach with all our backpacks. It was Gokul’s first encounter with the SEA goddess! He was awed. We took couple of photographs before the battery depleted.

Coming from a landlocked country that has only world’s highest mountains, sea naturally fascinates us. It does every time we see it, touch it and feel it.

Tomorrow morning it we will go back to the beach for the sunrise.

When I arrived here I felt I had seen this place before. Then I realized I was here in October 2008! END_OF_DOCUMENT_TOKEN_TO_BE_REPLACED

Time to sleep again, perhaps last nap before reaching Delhi. I was reading the Grisham book after dinner but the woman in the berth below switched off the light. So I decided to sleep. Bikash Ghalay is also sleeping.

I don’t want to sleep. For now blogging via iPhone seems to be the better option.

The kitchen guys along with servers came for tips. I gave Rs. 6. That’s all I had as change in my front side pocket. Peraps they didn’t deserve more.

The environment inside the train is interesting. It is culturally so diverse. People speak so many different languages and have all sorts and kinds of faces. They are from differnt cultural, religious, geographical, linguistic and ethnic background. I love this diversity and plan to do more rail trips in India in coming days.

While the train was moving with its own speed, afu chai pura sutiyechha ni hoo [I was having a sound sleep. Was in Darjeeling until yesterday, thus the ascent!]

In a way, the rail completely screwed me up. I was supposed do something as soon as I reached my Delhi apartment. I was expecting to reach there by late morning.

Just had some snacks the rail guys provided. Now waiting for the tea glass and hot water. Tea bags and creamer are here with me already (courtesy the train kitchen).

Ok, this guy from Darjeeling who slept on the berth just beneath me last night thinks these two girls must be from Shillong. [Later, at the near end of the travel, I learned that the girls are from Manipur.]

The Ghale guy from Daejeeling. His name is Bikash Ghalay, I learned later. We started speaking in Nepali from the moment we knew the other guy was a Nepali. Bikash is 27 and says his parents have been suggesting him to find a girl from “afno jaat” and marry. He is looking for a Ghale girl. “Hamro tira kam 6 ghale kt haru (there r very few Ghale girls on our side)” he said. I suggested him to go to Nepal (Kaski, Lamjung) and find one.

He is sleeping now. So are the girls. Same with the sasu-buhari pair.

I must be somewhere in Bihar at this point in time (10:57 am). There is no Airtel network signal here so this post will be saved as local draft. I am now seared on the upper berth (0003) inside the B3 compartment. This particular block is fully occupied with all eight people.

Two girls from Assam are lying on da double seats on right to mine (tripple). I must be looking like a monkey from down there (I had the same feeling for folks on da upper berth last time when I traveled down to Kanyakumari in October in Raptisagar Express).