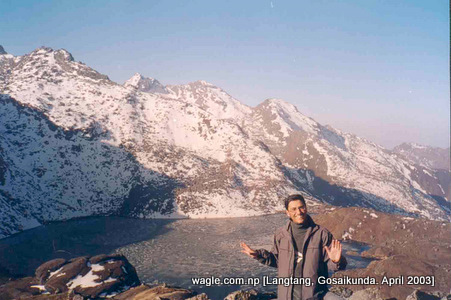 After crossing the pass, Dutch were out of sight, and we were slowly descending. Tired of walking on the snow, we were just, we were just going down, without uttering a single world. Suddenly a man appeared a little bit up. He was literally running, he was getting down with bang, bang, bang…We thought, one of the Israeli from another group was that guy. No, we were proved wrong. This Guy turned out to be an American ‘wanderer’ called Stan James. Because of his simple and humorous personality, Stan and we were quickly opening up to each other. The infamous place called Ghopte where a Thai airline plane crashed a decade ago was our destination of the day. The guessing game started. I was saying Ghopte was some three corners away; Anu’s guess was about seven. Stan was with Anu. I was wrong. Even she was wrong! But Ghopte came, at last, as a pleasant surprise to us. There were only two lodges and we were soon eating chapatti in one of them. We talked about books, trails to be taken in the next few days, (Stan’s hometown) Colorado mountains etc.

Note: To get an American perspective of Langtang-Gosaikunda trek, go to Stan’s website, and read a fascinating travel detail.