Wagle under Cherry tree: Ha ha.. in fact, I feel so uneasy to pose for camera. I want shots to be natural. But this was the moment when there was no alternate options, I guess. Pic by Kiran Nepal

“The first week of April is the best time to be in Washington D.C.,” American ambassador James F. Moriarty had told us in Kathmandu prior to our departure to his country. He was giving us his views of America in his office. “You will see blossoming cherries. That’s beautiful.” He was correct; D.C. with blossoming Cherries was beautiful indeed. These cherry trees were gifted by the Japanese government immediately after the World War II. 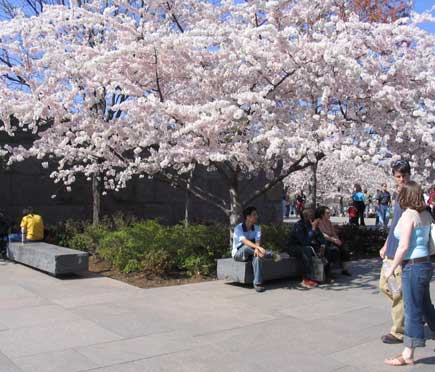 There was a festival- Cherry Blossom Festival- being organized. People were thronged into the area to see the attractive trees. Bands were playing live music and people were trying to have group photos. That was a tourist season in D.C. and we also benefited from that situation. The hotel where we were staying, Lincoln Suites, wanted more guests to accommodate in the hotel. So the hotel requested its guests to share the room if they wanted. We happily did that for a night and saved at least two hundred bucks.