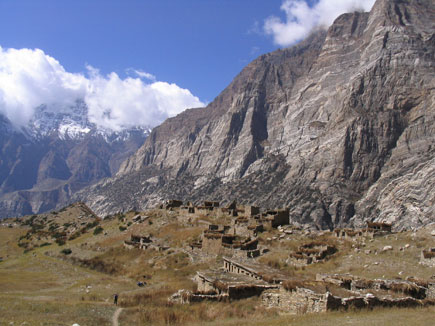 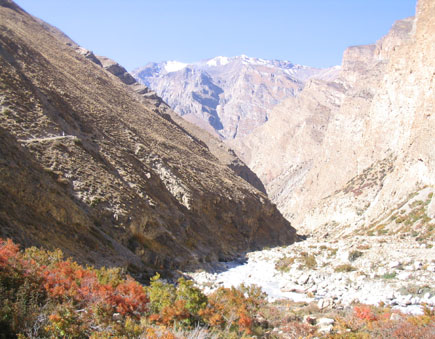 Colorful flowers on the trail leading up to Phu

Kyang: Arriving in Kyang, the winter settlement of Phu vilage was the point of attraction for Khapa buildings. Nearly three decades ago, Tibetan Khampa refugees (they are also called insurgents) came from the neighboring Mustang where they were taking temporary refuge and probably preparing to fight against Chinese occupation in Tibet. Khampas invaded places like Kyang and gave dikkats to Nar and Phu residents by occupying land and killing yaks. They were flushed out after Nar and Phu residents complained about the invasion to Nepalese authorities.

At the altitude of 3840 meters, Kyang is an exciting place but, alas, what a bad day for me. It wasn’t really long day but I wasn’t feeling well. I was hardly walking. I was dragging myself. As the Sun got hotter I started taking off thermals but kept on wearing windproof jacket to save my chassis from the strong blows of cold wind. I was feeling dry and dehydrated and facing difficulties in breathing properly. I was drinking but that wasn’t working. We were walking above 3500 meters. 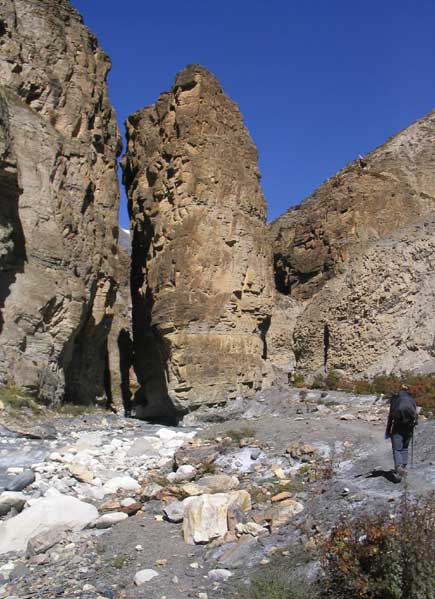 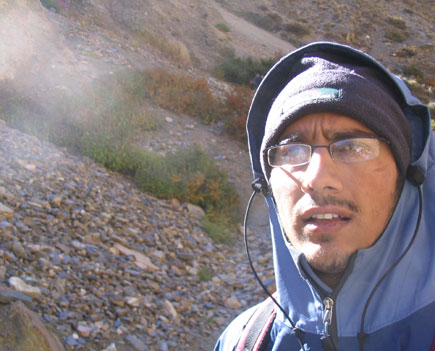 As soon as I arrived at the camp site, I lied down on the ground. I wanted to sleep, take rest, and of course, get well immediately. It wasn’t a place to be sick. It was definitely not a good time. We would be in Phu tomorrow where I plan to go around and interview local people. I have to make stories for newspaper. What will happen if I became sick and unable to walk? I also thought of staying in Kyang next day and joining the team when they return from Phu. Terrible thoughts came to my mind as Jenny put a piece of cloth dipped into cold water on my forehead. Oh… that felt so good, thank you Jenny. Wanda tried to provide some shade on my head opening my umbrella. “It’s futile,” I heard her saying as the blows of wind made it difficult to fix the umbrella. She suggested me to go under a tree and we when I went there, at the end of the camping site toward river, strong blow of wind nearly sent me up in the sky. I started to write diary (of previous day) sitting behind a small rock. Wanda came with the digital thermometer and she said that I had slightly higher temperature (.5 point high, she said). I couldn’t eat all of my lunch. I wanted to take rest and went inside the tent for nap.

So it’s my turn to be sick today. But how long will it go? I don’t want to be sick here in this remote mountainous region, totally different geography than where I was born and raised for the first 10 years. I was born in the hilly region of mid-Nepal but here the hills are so big, they can easily be called mountains when covered by the snow. They seem deadly, lifeless. There are no plants, there is no life. Yes, a few birds are flying over these huge rocks but I wonder what those birds see over there and hover around.

Jenny wasn’t well on the first day. Then it was the turn of Lorraine, I think, on the second day. Then the guitar started weeping gently when our George Harrison started feeling grumbling stomach. Life is like this, dining tent is so much silent these days. You know why? Suusan, the talkative lady from New Zealand (remember her waist twisting ability?), has lost her voice, and she is not having very good time, health-wise speaking. And here is one irony with me. The other day in Meta, I was asking who else was in their best condition other than me. No one came forward with an exciting answer except perhaps Wanda. And today, look at me. I am feeling terribly bad and when you feel bad in this kind of trail and geography, it’s really bad. I took four tabs of paracetamol this afternoon and in the evening. I really hope to get well by tomorrow morning. 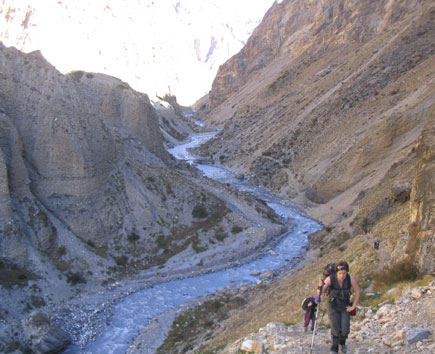 Near Kyang, on way to Phu: The trail just above this is described by maps as ‘dangerous rocky trail’