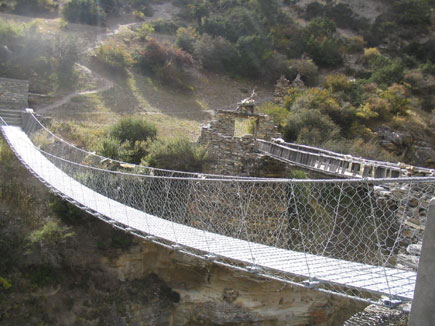 The Bridge: Yes, the bridge. One of the most exciting structures that I have ever seen. The location makes it even more exciting. I wouldn’t call it an ‘engineering wonder’ but it is built so meticulously that you wonder how they built such a thing in such a place! Then there is another five-year-old modern suspension bridge from which I crossed the Nar Phu Khola fearing that, if I walked over the old one, the bridge might crumble and fall down.

Wanda bravely walked over it showing no sign of fear. I was encouraged but only after she challenged to me go through it. “You must do at least one thing daily that scares you,” she said. At one point, Wanda was pushing me toward the middle of the bridge making me frightened like a child. That scene has been captured by Matt in a video from the new bridge. 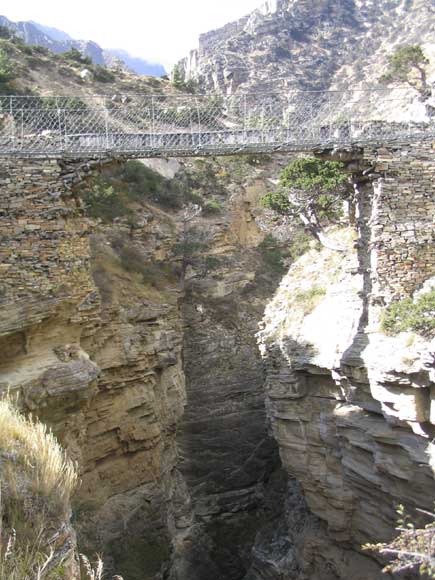 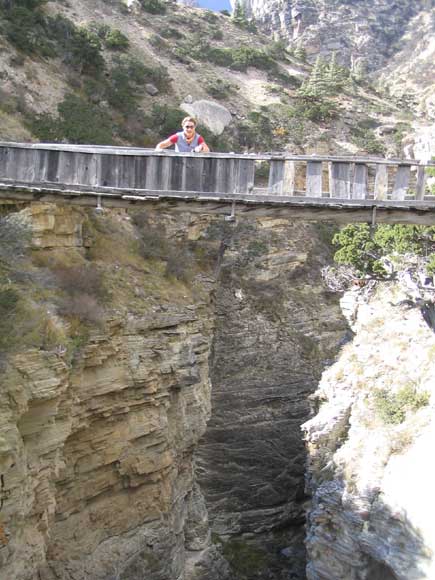 Wanda on the old bridge.

Turning the pages of Cloud Dwellers: I am showing the book to Nar folks at Nar Phedi

The bridge, or Chamjong, has been unofficially re-named Mahendra Pul (pul=bridge), taking the name from the famous bridge in Pokhara where Seti river goes unseen. Here too, below 80 meters, you can see the river flowing through the narrow ridge but you can’t help remembering the Mahendra Pul. Each side of the bridge is supported by walls of stones and woods are used to hold them together.

But the world Mahendra must be removed from the Pokhara bridge because it reminds us the king, father of Gyanendra, who in 1960 overthrew the first democratically elected government of B P Koirala in Nepal and installed a party less autocratic system called Panchayat. Panchayat was removed by the popular uprising of 1990 that restored democracy in the country. And the April uprising of 2006 removed the autocratic system installed in Feb 1, 2005 by Gyanendra.

Margriet clicks an image of the old bridge from the new.

The bridge in Nar phedi has a local name that I mentioned earlier- Chemjong- and this should be used widely. Plus, this bridge must be preserved for tourist attraction. In my meeting with locals of Nar, I raised these two issues and they promised to work to maintain the bridge with its old name.

This evening Wand and I went to a nearby monastery where we met a few locals from Nar. We showed them the book and asked them about the people featured in the publication. The bridge also came in to the talks. “Yaks still use that old bridge,” said a young man who was living in monastery because they were working on the construction of a new monastery by April. “Yaks never use the new one. Only men and horses use the new bridge.” The young man also told us that the bridge hasn’t been maintained recently but they were planning to do so in the near future.

We spent the night at a camping site just above the bridge.