An example of religious harmony in Nepal. [But some people want to differ. That is why this post has an update below on 28 October.] 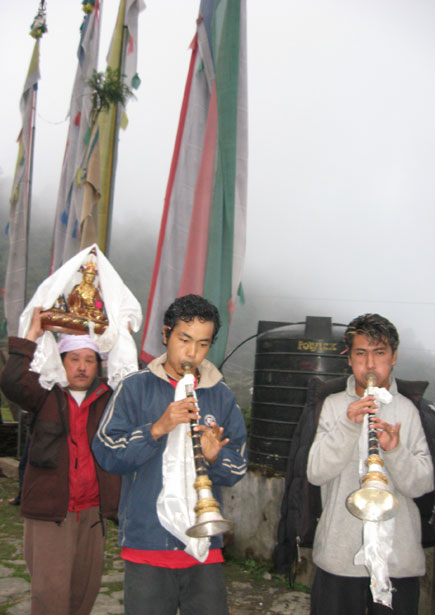 This Padmasambhava idol of lord Buddha is taken out of the Tarke Gyang monastery only once in a year, on the day of Dashami (10th and most important day of Dashain festival), according to the head monk (lama). [Related article in Nepali: पदयात्राका पात्रहरू Below is the video of the ceremony.]

Oct 21 [Tarke Gyang]: They say traveling is learning. I feel that’s right. You learn about so many things while traveling new places. About cultures and people. When we reached Tarke Gyang, village in Helambu region, we saw a ceremony in the Monastery there. What’s that about? We wanted to know. “It’s our Dashain,” said the main monk (Lama) who was performing the ceremony. “You guys celebrate Dashain in your own ways and we celebrate it in our own way.” He was taking us as Hindu. Dashain is the biggest festival of Hindus and is considered national festival in Nepal though many would like to counter this “consideration”. I had always known that Hindu and Buddhist religions are so interrelated in Nepali society that their followers live in harmony. Buddha was born in Nepal and Hindu religion considers him an incarnation of lord Vishnu. Hindus celebrate Buddha Purnima (full moon day, the day Buddha was born and got enlightenment) and Buddhists also celebrate many Hindu traditions. I used to think not until long ago that there was actually no difference in these two religions because of the way followers of these two religions enjoy such a nice relationship. As I have mentioned in my Interests page, I am religiously secular person and I respect all religions equally. So the Dashain celebration in the Tarke Gyang monastery was an example of religious harmony for me. “Hindus sacrifice many animals during the two days of Maha Astami and Maha Nawami (eighth and ninth day of 15-day long Dashain),” said Kanchha Lama, the head monk of the monastery. “And we fast on those two days and prey for the soul of those animals killed in those two days.” And a young man added: “Hindus put tika from their seniors. We receive tika in the evening from head Lama.”

Update 28 Oct.: Suraj and I wrote about that celebration in our travelogue (पदयात्राका पात्रहरू)that was published in yesterday’s edition (27 October) of Kantipur daily. Not all people were happy. A group of Yolmo (pronounced Hyolmo) organization people came to Kantipur Complex today to meet me. They were angry about the theme of the story. They said that that was not the Dashain ceremony. “We Buddhists don’t celebrate Dashain,” one of them said. “To say that we celebrate Dashain is an insult to us.”

They wanted to publish their comment in the newspaper and I happily accepted. Their version of the story will appear in tomorrow’s edition of the paper. Here is an excerpt of the conversation that took place between the group and me:

“But I didn’t write that from my imagination,” I said. “The lama who was actually performing the ceremony told me explicitly that they were celebrating Dashain. And I have clearly attributed the saying to him in the story.”

“Well the Lama is wrong,” said a guy. “We are the authority. We are the people who run the [non governmental] Hyalmo (people from Helambu region identity themselves as Yolmo or Hyolmo) organizations.” 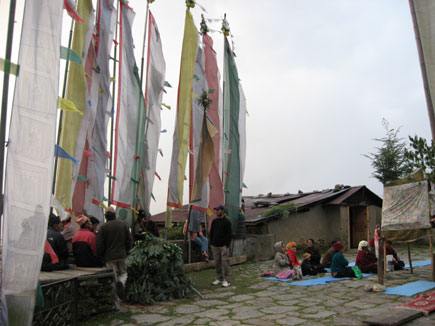 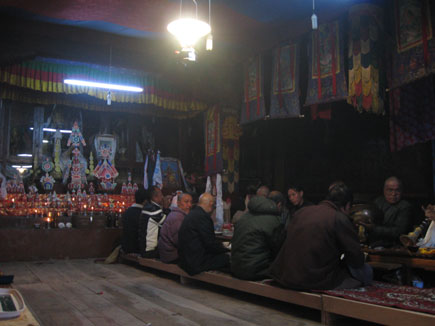 The head monk (lama) and others performing pooja inside the monastery.

“Well not only the Lama but people who were participating in the ceremony also told me that they were celebrating Dashain,” I said. “Actually they used the term Dashain. They could have said anything but they didn’t. They said they were indeed celebrating Dashain in their own style.”

“They are wrong,” another said.

“Monastery is a place that teaches nonviolence,” reads their statement that I will post tomorrow on this web site. “We don’t celebrate a festival like Dashain that kills so many animals in such place.”

“Yes I understand your sentiment,” I repeated. “But the Lama and the people organizing the ceremony told me that they were celebrating Dashain.”

“Anyone of you from Tarke Gyang village?” I inquired.

No, there were none.

What I have to say after all this? Well, politics is the name of the game. You play the game in the name of religion, in the name of region and in the name of ethnicity. One of them blamed me that since I was Hindu I was trying to impose my “Hindu superiority” upon them. I protested. I told him that I wasn’t a Hindu. I didn’t want to be identified as Hindu. I am a Human.

“What does Wagle mean?”

By then I was almost loosing my temper. “Okay, call me John Bush. Now what do you have to say?” I would have also added: “Call me Tashi Tenzing.”

Some people are really engrossed in the petty politics of petty subjects. God (of all religion) save Nepal.

10 thoughts on “A Hindu Festival in a Buddhist Monastery”