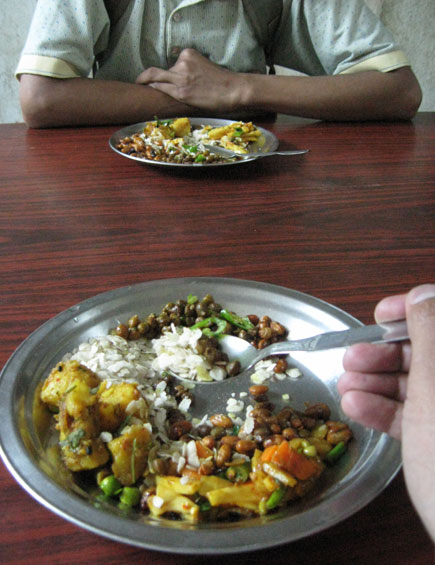 Pics of Wagle by Yogesh who’s seen partly in the photo above- front. Other pics by Wagle

Background: I had this idea of a story about the rising inflation, worldwide and in Nepal. I wanted the real story, human story not just the hard facts. Though I am not an a-dollar-day man (fortunately I earn slightly more than that) I can still feel the heat of inflation in various forms. The price these days have skyrocketed. From a cup of tea to a plate of momo to a t-shirt to apartment rooms to bus fares to plane tickets. So I wanted to do a story about inflation for Koseli but unfortunately I couldn’t. There were too many other news assignments for the regular issue of Kantipur. Too many foreign observers were coming in to see the CA polls and I had to follow them. I had to cover too many press conferences and other stuffs.

Chyura Set: So there was Yogesh willing to do the story. I was ready to help him though that too I couldn’t do. On 4th April I accompanied him to Ason promising to take photos and help him find the right characters and conduct the interviews. We headed to Ason via New Road after getting off the bus at Shahidgate.

I was hungry. I saw this small pamphlet pasted on the wall of a department store that said Chyura Set was available. Now I was starving. Chyura Set is one of my favorite afternoon snacks. I eat that in our canteen most of the times. There was not much time because I had to attend a press conference at the British Embassy in Lainchaur and before that I had to help Yogesh. I couldn’t resist the Chyura Set though. So we went inside and then a storey down. The restaurant was underground. Felt little bit strange but I my feeling was that the Chyura Set must be good here. It was. But the anda-bara (Bara the bread with egg) wasn’t up to my expectation. It was actually bad. We ate both.

Needless to say I felt another jolt of inflation when the sahuji told the money that we had to pay. Quietly, I paid. For Yogesh, it was a treat from my side.

It’s really difficult to talk to strangers on the street and unknown people who are shopping. That’s one of the many challenges of reporters. We had to do that. So we decided to talk to two ladies and the sahuji who was calculating the price after his customers had selected the household items. Unfortunately, the shoppers where buying things not to for their consumption in home but to take that to Hong Kong. One of the ladies was staying in HK and she had gone to Ason to buy some masalas and things like that.

A Maoist campaign banner in Ason as seen on 4th April 2008.