In the Peopledom of Gorkha

The district of Gorkha, in my mind, was always a very remote place. That was before I went there last month (in the first week of March). I couldn’t go outside the district headquarter and trek in the villages. I found the district headquarters nice and beautiful. I had to trek for about half an hour- climbing all those stairs- to reach the fabled Gorkha palace and the Gorakhnath temple. That is where I took the photo displayed above. Camera isn’t allowed in the temple and palace premise so I did the self-portrait just below the the main entrance gate.

I was in Gorkha as a translator and fixer for a New York Times reporter who was here in Nepal to do a story on monarchy. My primary job was to translate the interview as interviewee spoke. We talked to the priests at the temple, some devotees and women who were walking on the street called, what else, Durbar Marg! Unlike the more famous one in Kathmandu, this Drubar Marg was narrow and a long staircase. There were some graffiti scribbled on the stones that asked the pilgrims to chant the name of Gorkahnath Baba so that they could fight the tiredness. That was funny. Jai Gorakhnath!

We also visited a park that told visitors the history of Shah Dynasty and how Prithvi Narayan Shah, the greatest among the Shahs, “unified” Nepal some 240 years ago. PN Shah was the king of Gorkha and he started his unification drive from there. History, they say, is the horse of the winner, and the winners made us read the history that says PN Shah really unified Nepal. May be. For some, what PN Shah did was an act of imperialism. He just expanded his empire. What if he hadn’t “unified” Nepal? We wouldn’t be an independent and sovereign country of today. May be. I am not skeptical about what PN Shah did but I am just curious about the other side of the coin. How the history would have been written if there was a winner other than PN Shah?

Not in national anthem, not in currency: The new Rs. one thousand bill, yet to hit the market, will have the photo of the king replaced by the image of Mount Everest just like in the Rs. five hundred bill. Nepal has already scrapped the old national anthem, fully of praise of the king, and replaced that with the new people-centric anthem.

I have no hesitation to consider PN Shah as the great nation builder but I strongly object the notion that just because PN Shah formed the “kingdom” of Nepal his criminal successors has the right to rule Nepal. Some people with slave mentality say that persons like Gyanendra and his son Paras has the right to rule the country because after all their ancestors unified Nepal. My reply to them is: why don’t you go and ask them to employ you their slave? Some people argue that the national integrity of Nepal will be in danger if Nepal abolishes monarchy. What a poor argument. As if Nepal didn’t exist before Gyanendra or Paras or even PN Shah.

Okay, this post is not about the past. It’s about present. There is a big pillar in the park where the statue of PN Shah once stood. Now there remains a flowerpot. Maoists destroyed statue last year and, according to an eyewitness, dragged head on the street. My feeling is that they shouldn’t have done that. What use of destroying the statue, a mere statue, of PN Shah?

Anyway, in the recent CA polls, Maoists won in all three constituencies. A Maoist leader Dr. Baburam Bhattarai secured the highest number of votes that any candidate go in the polls in the country from one of those constituencies even though the polls were not free from irregularities. 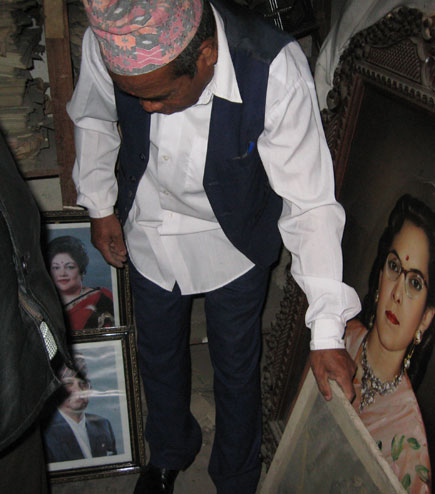 An employee at Nepal Rastra Bank shows the photos and portraits of the kings and queens that were removed from the office rooms after the historic peoples’ movement and put in a dusty store room.