For the record, the Election Day Story: Thanks to the bikers, it was a relatively easy day for me. 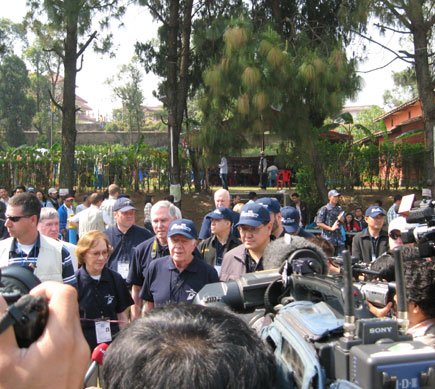 The Carters face us in a polling station in Pulchowk.

How often do you ask for a lift on the road? I rarely do that in Kathmandu where different forms of public transportation could be found almost everywhere in the city. What about when there is a Nepal Banda (general strike) or ban on vehicles but one brave or a privileged rider is about to pass away by your side? Give him/her a hand? Why not? That’s what I did on the Election Day (10 April) and I was able to go around the city of Kathmandu and Lalitpur in a few hours.

Here goes the story. After casting my vote in a polling station near my house in Gothataar, I was heading towards office in Tinkune. I was planning to be at Koteshwor at around 8:30 where a team of European Commission election observation mission was scheduled to observe the voting procedure. I wanted to cover that though the real place where I wanted to be at 9 AM was a polling station in Pulchowk where former American President Jimmy Carter was scheduled to be present. It was impossible to make it to Pulchowk at 9. [It takes about 45 minutes of walking to reach Koteshwor from my home. Then another one hour from there to Pulchowk.]

A foreign TV crew member at the Pulchowk polling booth to cover the Carter visit.

I had already walked for about 10 minutes when I saw two kids playing with their bicycles. “Hey, want to give me a ride?” I asked. “I will ride and you sit at the front.” After a couple of seconds of hesitation, he agreed. He wanted to sit at the back. I didn’t have to operate paddle because the road was all sloppy and I reached Sinamangal, popularly known as Pepsi Cola (where a factory of Pepsi Cola is located). “Thanks buddy,” I told him and started walking. That little ride had saved 15 minutes.

For many, it was the Voting Day. For some it was a Snoring Day. As seen in Nagpokhari (or is it Kamalpokhari, near Jay Nepal, I am confused), near a voting booth.

After about five minutes of walking I saw a motorbike (with no one at the back) racing towards where I was going. Instinctively, I waved at him. He stopped. “What about a ride?” I asked.

“Why not?” he responded. “I can take you up to Jadibuti because, [after that there will be police,] you will need the permission card to pillion ride.”

“Well I have got such card,” I said referring to the card issued by the Election Commission that allowed me to be enter inside the voting booth.

A woman is about to vote at the nearest polling stating from the royal Narayahitti palace. Many people voted to throw monarchy out of the palace whose southern wall is seen in the photo. 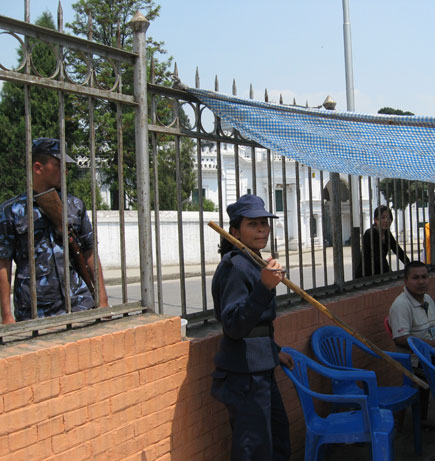 The guy, he told me, was an employee at Rastriya Anusandhan Bibhag (our intelligence agency). I was pillion riding on a spy’s bike! I told him about my profession. He was going to his office which I knew was in Singadurbar. He planned to vote for “proportional” election in his office. “Okay,” I told him, “I want to go up to Babarmahal [from where he would take a turn to Singadurbar] because I want to go to Pulchowk. I can walk from Babarmahal.” I didn’t get off in Tinkune where my office is.

The road was so empty, like never before, that not even during the most successful Nepal Banda you could see such an empty road in Kathmandu. The EC had banned all vehicles in the valley (actually all over the country) and had distributed permit passes to certain and selected vehicles for election observers, newspaper offices and security agencies and ambulances etc.

I got off at Babarmahal, thanked him and started walking. I was in Maitighar and I saw another bike coming.

It was Madhav Dhungel, a reporter colleague of mine at Nepal Magazine. He was going to Pulchowk to cover the Carter event. There was one guy of KTV who was pillion riding at his bike but then it was time for him to get off. Madhav was going to Pulchowk and the other guy to Dillibazar. So I jumped on Madhav’s bike. I was in Pulchowk at around 8:30. We learned that Carter would be late by 30 minutes. There was plenty of time for chitchats.

Actually my destination of the day was the Radisson hotel in Lazimpat where I was supposed to meet a foreign reporter at 1 PM. Upon my request, Madhav dropped me at Maitighar and went to Kirtipur-10, the constituency of Comrade Prachanda. I waked up to Radisson slowly, observing people on the street and stopping by at a polling booth in Putalisadak. I was hooked to FM radios via my cell phone for latest on the polls.

After reaching Radisson, we went to two voting booths near the Narayanhitti palace and returned to the hotel.

Now the long walk back to office remained ahead of me. I had to write about the Carter event. I was walking…thinking that in about an hour I would make it to Kantipur in Tinkune. I was walking. As I was walking by the Hotel Ambassador, not far from Radisson, a motorbike came. I raised my hand. He stopped. What about a ride? Perhaps up to Ratna Park or wherever!

It turned out that the guy was an inspector with the Armed Police Force and he was out there with no clear destination in mind. “I was out to see how polling is going on,” he said. We talked about our professions and, in about ten minutes, he dropped me at the main gate of my office!

Thank you, man! Thanks a lot. On his part, he was happy to give a ride to a reporter.

I took rest for a while and decided to visit a polling station at the nearby VS Niketan School (five minutes walk from Kantipur Complex). That was in Kathmandu-1 constituency, the only constituency where electronic voting machines were being used for the first time. I talked to quite a few voters and some election observers (who didn’t want to be identified though a photo showing them talking with a Maoist candidate from the constituency will be posted along with this post). It was about 4:30 and I still didn’t want to go back to office. I walked another five minutes and reached EPS School in Minbhavawan where there were two polling stations. I talked to an East Timorese guy (who had come to Nepal to observe the polls as a member of the ANFREL mission. I had seen him couple of times before in Hotel Radission where the ANFREL mission was staying.) I talked to him. He had worked as a translator/interpreter for British Gurkha soldiers (from Nepal of course) who were in East Timor as part of an international peace keeping mission some years ago.

Then I came back with a lot of pages of my reporting diary and camera memory card filled with quotes, information and photos. I shared some quotes with Bijay Ghimire who was writing about the electronic voting machines.

Finally I was back in home at around 10 thirty. The office vehicle, as usual, dropped me at my house. By all standards that was a rather long day. But thanks to the three bikers, that was as long as it would have been.