Dinesh Wagle
Wagle Street Journal
[This article originally appeared on the Op-Ed page of the Kathmandu Post today. See it here as it appeared on the paper. Here is the Nepali version [PDF] of the same article that appeared in today’s Kantipur.]

Plastic bags have become pariahs in Delhi. They are also dominating headlines for all the bad reasons. The government of Delhi completely banned them in January following a court order in August last year. “We shopkeepers are unable to provide plastic bags/carry bags to our customers,” says a Feb. 2 notice pasted on the wall of Sheti Store in my neighbourhood where I buy rice and other goods. “Customers are requested to bring bags themselves.” Plastic bags are blamed for having caused enormous harm to the environment as they are not disposable and, when thrown out on the streets, they usually choke sewage and end up as food for stray animals.

Environmental activists are elated but plastic industry honchos are not happy at all. And this week was theirs. They organized a huge (“world’s second largest”) international plastics exhibition and conference in Delhi’s Pragati Maidan that will be on till Monday. The seventh edition of Plastindia exhibition was inaugurated by Pratibha Patil, the president of India who gave the publicists an attractive headline for their press release: “Plastic waste is wealth if managed properly, says President”. Plastic is not just about those carry bags but so many other things, that, in most cases, don’t even look like plastic and are used widely by people as integral parts of their lives. Such things were in full display in the exhibition. 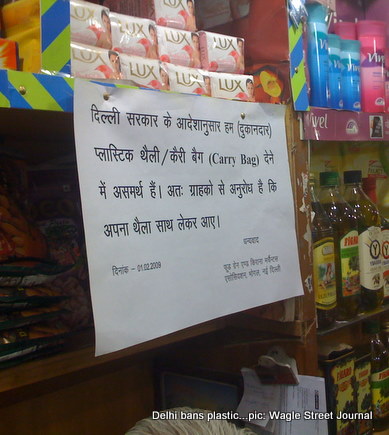 Arvind Mehta, president of Plastindia Foundation, the organizer, said that plastic bags have been unnecessarily vilified. “Why blame plastic for anybody’s inefficiency?” he asked. “Nobody throws plastics inside their homes and offices and everyone throws plastics on the streets. That should be controlled. No country can progress without plastic. Instead of focusing on the waste management, they chose to ban plastics. The government wants to escape its responsibility.” An article in the Plastindia journal noted that the plastic “bag has been vilified not for what it does but for what people do with it; use it and dispose of it responsibly.”

Delhi door nahi, so goes the saying in Hindi. Delhi is not far [from Nepal]. Drive in a bus for eight hours and you are inside the Nepali border. An hour and a half in a plane and you are in Kathmandu. Except for the beard and turban sporting Sardarjis, many people in the Indian capital do look like us and Hindi, their language, shares the same script as our Nepali. If you have learnt Hindi via Bollywood movies like I did, you will find many new words in actual slang- and swearing-filled conversations that you never hear in films and serials. That’s a topic for some other day. Today it’s about proximity.

Phones are always there to say hello to office colleagues and family members but nothing brings Kathmandu closer to Delhi (or Delhi closer to Kathmandu) than the great network of computers. Thanks to the Internet I can watch at least one Nepali TV channel, listen to several Kathmandu based FM radios, read Nepali newspapers and experience Nepali music right in the comfort of my Delhi apartment. Even on the web one thing stands out in taking me closer to Kathmandu. That thing not only helps “you connect” but also “share with the people in your life.” Yes, I am talking about Facebook which celebrated its fifth birthday this past week.

I have been using this social utility for almost two years now and have experienced a growth of Nepali users only recently, let’s say in the last six months. In the initial days, only Americans and Nepali students in American colleges were my Facebook friends. Facebook begun in 2004 as a closed, students-only network exclusively for American schools and colleges and it was opened to the rest of the world only in September 2006. Since then I have written a couple of articles about Facebook and they have invited dozens of comments from readers living as far away as Norway and ‘friend’ requests on Facebook from people in Thamel to Thailand. These days I have stopped accepting requests from people I don’t know but I still find it interesting reading the ‘status’ of friends and ‘friends’. It’s like reading a work of anthropology, visiting an exhibition, trekking in the highlands of Nepal. More than anything it’s like reading the psyche of the Nepali people.

The status updates are as original as they are typical Nepali in both style and substance. Some of them are hilarious while others are thought provoking and still others are extremely boring. If you know the person but are away from them as I have been for the past three months, updates will provide you not only the latest about them but also their current state of mind and internal feelings. You don’t get such updates even if you are to talk face to face with the person in question. Here are some samples:

1. “Hurray!” there is electricity for next 4 hours. [No need to guess where this person is living. In the capital city of the country that boasts of its capacity to generate 83 thousand megawatt of electricity but gives its people several hours of power cut every day. There are varieties of updates related to load shedding. Here is another: loadseddingko peedamaa chhatpatidai (being tormented by the load shedding)]

2. is buying old books from Sajha Pustak Mela. [So there is a Sajha book fair in the city, huh?]

3. is at office. [Almost all of my friends and ‘friends’ in Kathmandu — some of them reporters — update their status from office. So that’s one of the widely found status update.]

4.is tired of fighting against favouritism, institutional colonization and people with short term vision. [Now, that’s quite something. Nepal is a fertile land for struggle of all kinds. “Ke bhayo feri” (what happen again?) is the comment for that status. Here comes the reply: “Nothing dai. Just thinking. What will be the future of an institution where personal interest dominates over the institutional interest, rules are misinterpreted and people maintain double standards.” Then comes consolation from another commentator: “Don’t get frustrated, world is like that… nothing is perfect… only in the ideal world everything goes as it should.”]

6. is not excited anymore! [So no summersault today?]

8. is reading Bill Emmott’s RIVALS; How the power struggle between China, India and Japan will shape our next decade. [That is always an interesting topic for the citizens of a ‘yam between two boulders’!]

(The writer is the New Delhi bureau chief of The Kathmandu Post.)