A Lot Can Happen Over Coffee

By Dinesh Wagle
[Here is PDF version of the article]

In New Delhi’s old commercial hub, discontent is brewing over cups of coffee. The caffeine has jumped out of the cafe and reached the court. A civic agency has threatened to close down a 57-year-old coffee house located at the top floor of a shopping complex Mohan Singh Place in Connaught Place for not paying the rent. The patrons are not pleased, and the Indian Coffee Workers Cooperative Society that runs the not-so-commercial hangout has sued the New Delhi Metropolitan Council. The war for coffee guff is being fought on all fronts: cultural, political and judicial.

In this age of air-conditioned cafés with nice seating arrangements, you wouldn’t really fight for the continuity of a coffee house where fans hovering over the stained tables and broken chairs can hardly provide any respite to customers in the scorching summer heat. By the standards of the swanky outlets installed across the city by chains like Barista and Café Coffee Day, the Indian Coffee House is an old and ailing museum where mostly oldies and middle-aged come to kill time by talking all the “nonsense” that comes to their mind. But that is exactly the reason, its patrons argue, for the continuation of the coffee house. Despite its grimy outlook and loathsome service, this is no ordinary coffee house after all. As some protest pamphlets pasted these days on the walls of the Coffee House proclaim, this is a café that has produced prime ministers of India.

“Save the PM-maker Coffee House,” says one placard. “This is the country’s think tank coffee house,” proclaims another. “(It’s an) intellectual hub.” 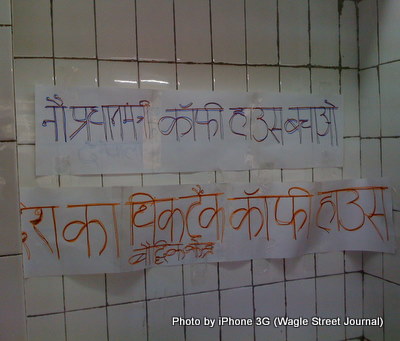 Opened in 1957 as the first branch of the nationwide chain, the Delhi outlet has served coffee to the likes of I.K. Gujaral, former prime minister, and Sheila Dixit, the current chief minister who reportedly came to support its continuation this past week. Prominent politicians, journalists and artists like M.F. Hussein have come here. Some are still coming. One of them is Trilokinath Purwar who fought the British during India’s freedom struggle and even today, unlike many 85-year-old men, carries the same rebel spirit. He said he has been coming here since the coffee house’s inception.

With his smile, height, manners of speaking and the gray hairs that I could almost count, Purwar reminded me of our own Kishun-jee who has been restaurant-hopping in Kathmandu these days after being discharged from hospital recently. As it happens with most of the visitors to the café, our conversation was also not focused on one topic. We jumped from the “fight for Indian independence” to the “mafia Indian bureaucracy” to the “Maoist movements” in our respective countries.

“You see,” said the old man. “There are two different reasons for these Maoist movements. In Nepal, they fought against feudalism, whereas in India they are fighting against colonialism.” Didn’t India do away with colonialism in 1947? Purwar believes the colonialists were replaced by the mafia bureaucracy that has colonized many parts of India that were autonomous during the British Raj. “With the massacre of the king in 2001, the moral voice of the monarchy died, and the village feudalists started losing their resistance power against the Maoists,” the old man offered his interpretation of the Nepali conflict. Clarifying that he wasn’t a Maoist, Purwar added, “Struggles will continue in India until the corrupt bureaucracy stops eating money that is meant for the poor villagers.”

I am not sure about the prospects of the Maoist struggle in India, but one thing is certain. This coffee house provides people with the freedom to express their opinions that can only be rivalled by the protests organized on the nearby Jantar Mantar road. “You can freely express yourself here,” said Purwar. “People listen to you even if your views are absurd. Nobody objects or ridicules you. All enjoy. Thoughts and ideas are exchanged in a free manner.”

The hip Barista or CCD outlets where youngsters and the rich flock for coffee and guff aren’t signs of India’s progress, he said. “A certain section of society in India has progressed,” Purwar said. “But a majority of the people haven’t. They are still living in poverty.”

That was our little coffee guff (chitchat).

The mention of “coffee guff” reminds me of my own little adventure in a coffee house in south India along with a Nepali book with the word café in the title. Narayan Wagle has often been credited for introducing and popularizing the term “coffee guff” in the Nepali psyche. Wagle (my ex-boss at Kantipur but no personal relation) rose to fame partly through his semi-fictional weekly column “coffee guff” in the 1990s. In 2005, he wrote a bestselling novel Palpasa Café that begins with a romantic scene in Goa.

I was vacationing in Goa in October and had carried a copy of the English edition of the book along with me hoping to present it to a beautiful girl like Palpasa, the protagonist, on the beach. Wagle joyfully laughed hearing my plan, wished me a great journey and hoped to have coffee guff when I returned. The coffee guff with Wagle couldn’t happen, but by sheer coincidence I managed to find a beautiful girl over coffee to gift his book in Goa.

When I reached Kolva beach, to my dismay, there were no beautiful girls who, I had imagined, might be lying down on the sand with their eyes covered by sunglasses and their bikini-clad bodies exposed to the warmth of the sun. On that October day, there were only a few married couples with their kids, sari-clad women looking for customers wanting a tattoo, and a bunch of boys seeking thrills on a motorboat. While returning to the hotel, I saw a Café Coffee Day signboard that said: “A lot can happen over coffee…” Thrilled by what I saw, I ducked inside to order a Café Latte.

Soon a group of college youngsters swarmed into the café and one of them, a boy, came to me, “Hello, where are you from?”

“Nepal? Wow,” he said as he shared a table with me. Soon his friends surrounded me for a group photo. They had come from Kerala on an educational trip and were leaving in half an hour. Finding an appropriate moment I told my tablemate the story, and soon at least three girls, all of them beautiful and joyous in their jeans, kurtas and T-shirts, expressed interest in the gift. Amidst the flashes coming from their cameras, I handed over the book to a girl who appeared to be the most interested in reading the saga of the Nepali conflict.

I haven’t received any communication from the girl since then, but have concluded that a coffee house is a great place to meet people, from a 20-something girl to an 80-plus man and talk (if not always gift a book). 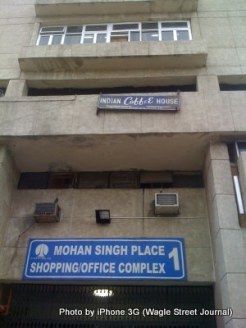 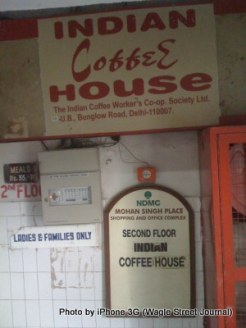 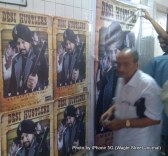 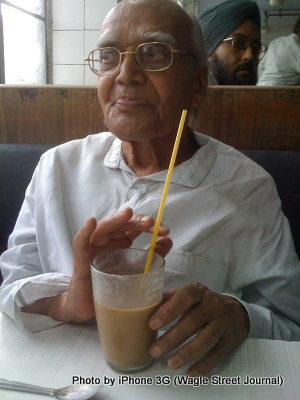 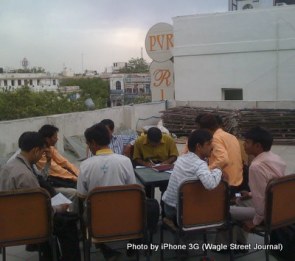 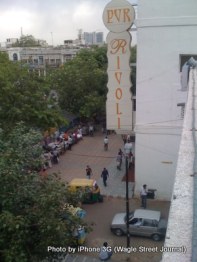 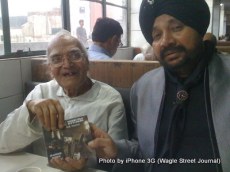 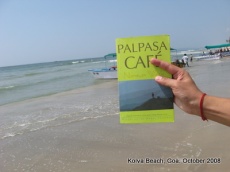 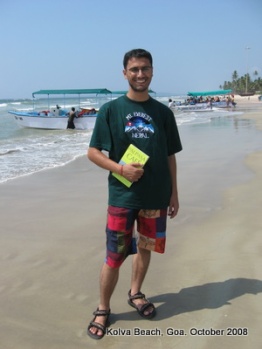 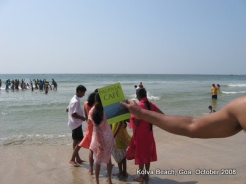 A Cup of Tea and Nizamuddin
From Delhi to Nepal (Kathmandu?) in a Bicycle
Loading Comments...