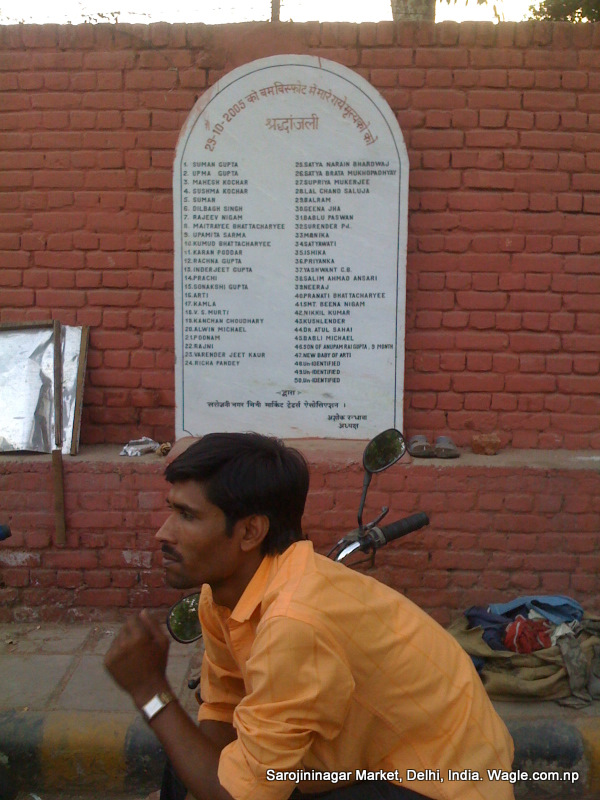 It was a sobering moment when I recently saw a plaque erected beside a wall at Delhi’s another well-known market in Sarojini Nagar. “Condolence to those who died in the bomb blast on 29 Sept 2005,” said the plaque. It listed the names/identities of 47 people. A total of 50 people died on that day. Three of them couldn’t be identified.

On the last day of 2009, India’s Home Minister P. Chidambaram appeared before the media as part of his monthly schedule to provide his assessment of the security situation in the country. The next day’s headline quoted the minister, “Eventful, but peaceful year.” That’s a jolly good headline to begin a new year with. In a country like India that is so wide and so populous, it is indeed a feat to make a year “eventful but peaceful”. Particularly so for a country that is so targeted by terrorists of different kinds and that cannot recall a year in recent times being peaceful in the true sense of the word.

Forget about the November 2008 terror attacks in Mumbai that dominated the “peaceful” year of 2009. Just look at the major markets in Delhi, for example, and you can see the scars everywhere. The Flower Market at Mehrauli was hit by a bomb in September 2008. The famous Karol Bagh market witnessed a blast in the same month that year. Blasts also rocked the markets at Connaught Place and Greater Kailash. It was a sobering moment when I recently saw a plaque erected beside a wall at Delhi’s another well-known market in Sarojini Nagar. “Condolence to those who died in the bomb blast on 29 Sept 2005,” said the plaque. It listed the names/identities of 47 people. A total of 50 people died on that day. Three of them couldn’t be identified.

Visitors to every major market in Delhi have to pass through metal detectors seen only at very important locations such as Singha Durbar, the central administrative complex, and airports in Nepal. Many of the security equipment installed in Delhi’s markets have become dysfunctional because, after all, Delhi is Delhi — the capital of India. The impaired detectors remind us of the fact that India, despite its recent economic growth, remains India, an improvised nation of a billion plus citizens with millions still in poverty. And those places with useless security equipment could still be vulnerable to attacks. If untoward incidents didn’t happen in 2009, it was not entirely because of the strong vigilance and policing, but perhaps because the terrorists were busy in other activities.

May such blasts never occur in Delhi, but the bright fact is that Indian society is vibrant and its power to get over such attacks has grown over the years. The critically acclaimed 2008 movie Mumbai Meri Jaan, based on the July 2006 train bombings in Mumbai that killed 209 people and injured over 900, tells it best. Whatever happens, life goes on. You survive to live your life. In fact, India is too big to be intimidated by such attacks and incidents. Society can get over the wounds quickly and move on. The pace is increasing as ever. As the New Year rung in, Indians welcomed it with a bang. Delhi was completely soaked in celebrations and parties. Big hotels and expensive restaurants were booked to their full capacity. Entry fees alone for many of the parties were in the range of Indian Rs. 10,000 per couple.

While providing his assessment, the home minister didn’t forget the Maoist insurgency that is spreading all over India and remained in the headlines throughout the year 2009. Termed the greatest internal security threat to India by its prime minister, the problem that is igniting Maoism in India is certainly a grave challenge for this country. “I am disappointed over the Lalgarh situation,” said the minister referring to the district in West Bengal that hosted a major part of the Maoist agitation last year. “It’s pretty depressing,” he said.

Depressing it certainly is, but overall, the situation in India is pretty encouraging. Some headlines are even more enthusiastic. Under the banner headline “Happy New Decade, India”, the Indian Express on the first day of the new year published the findings of a study that said, among other things, even if no reforms happen, India’s GDP can grow at an average annual rate of 9.6 percent for the next 10 years. “Nine percent growth for 10 years with no reforms — that’s how well-placed India is as 2010 begins,” it said. With rapid reforms, it said, India could achieve even more. Even without reforms, the per capita income will grow at an average of 8 percent per year. By the end of the decade, incomes will be almost double compared to now. Roughly 800 million Indians will be middle class — defined as those earning between IRs. 75,000 to Rs. 10 lakh a year — out of an end-of-decade population of 1.3 plus billion.

Going by the findings, it seems another challenge to the Indian government is reform because reform is directly related to the Maoist problem. If there are no reforms (policy status quo), and growth is 9 percent plus, more than 250 million people (out of 1.3 billion plus) will still be very poor in 2020, according to the study. The number of Indians not literate will fall by 10 million in 10 years, but that will still leave nearly 200 million non-literate citizens. The more poor and non-literate people in society, the more intense are the movements like that of the Maoists. The study says only drastic reforms in fiscal, education and other policies will help India become the global powerhouse that its citizens so badly want it to be.