Traveling with two IITians: Cherrapunji to Kolkata [PDF version of the article in Koseli] The event described in the blog happened in the first week of October. Here’s Parmalink: http://wp.me/pjyem-s6

The highway leading up to Shillong from Assam’s Guwahati was terrific. The trip began with some glitches. The road in the beginning is being expanded. But as it climbed upward the spiraling trail that passes through dense forests became mesmerizing. The three-something hour ride was wonderful. I didn’t feel dizzy as it usually happens with me on spiral hilly roads.

Reaching Shillong bazaar, I tried to wander around and wanted to find hotel ignoring the Lonely Planet guide book. After walking for about 10 minutes, I found a hotel. No rooms available, I was told. I then dialed all the hotels that were listed in the book. They were all fully occupied. I began to worry. I headed to PB. Police Bazaar, that is. This part of the city is packed with hotels of all kinds. I went to the reception desk of one and I was give the same reply that I had got on phone. I went to the next one. Same answer. It was freaking annoying. Finally, as it happens with everyone at some point in time, I found one room. I didn’t bargain. I just wanted to get hold of the room and throw my luggage inside.

The heavily bearded boy smiled. “Oh we have also come here to visit,” he said after I introduced myself to him.

Meet Swash and Pavan, 20-something IITians at Kharagpur, wandering on the hills of Shillong, looking for some fun mixed with smoke.

Swash asked me if I knew about some good restaurants in town. I turned the pages of Lonely Planet and mentioned at least two of them. Then the young man came to the point.

“Do you know where we can find ganja?” Swash asked.

We all laughed. We encountered again that evening and became friends, co-travelers. In fact, we had become friends on the instant Swash approached me. We would travel to Cherrapunji and Kolkata together, take pictures in front of one of Asia’s highest falls, dine in a restaurant floating over Brahmaputtra and browse books in Oxford book store in downtown Kolkata. Later I would describe my journey and some of our conversations in a piece that I wrote for Koseli (PDF).

Interesting thing happened that evening. The boys hadn’t found ganja yet when we met second time. “Lets find out,” I seconded and walked with them. Soon, we chanced upon a boy who happened to be a Nepali-speaking local (Indian citizen, local of Shillong). I started talking with him in Nepali, occasionally telling the boys what we were discussing about. Such was the situation was that Swash and Pavan, both Indians, were feeling excluded (my observation though they might not be feeling same) where as I, a non-Indian, foreigner, was trying to explain them about the locality and town based on information that I was getting from the boy. I asked the boy if he could find Swash and Pavan some gajna. It seemed like he could. Swash and Pavan were visibly excited. The Nepali-speaking boy said he will have to ask his brother (or some relative) about the availability and place to procure. Soon the other man came and we five went for shopping. We found, Swash and Pavan bought and stuffed the thing into my bag!

Because Swash and Pavan were staying in a crappy hotel room that they badly wanted to change, I suggested them to go to my room instead and check the quality of ganja. The puffing and drinking and talking started. By the time it was all over, it was already 11 pm (or more, I forget as I am writing this entry pretty late). The guys went. I locked the door, brushed, and was about to sleep when somebody knocked on the door.

The same guys! Apparently the hotel security had locked the main entry and wouldn’t open after 10 pm. Mine was single bed and there was no way we all three could be accommodated there. I took out the bed sheet and blanket and the boys slept on the narrow floor between the bed and wall. (There was another thin blanked that I used).

Next morning, I moved with the boys in a different hotel, a few kilometers far from Police Bazaar. We went to Cherrapunji and came back in the evening to have dinner in ‘the most expensive hotel in town’. On the third day, I went to meet a Nepali writer (local from Shillong) in a town where many Nepalis live.

Here are photos from my Shillong and Cherrapunji trip (Click on a photo to read caption in detail): 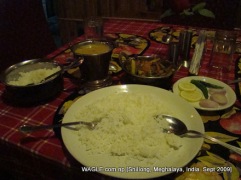 utensils of better quality, food so so

A few of the hilly city 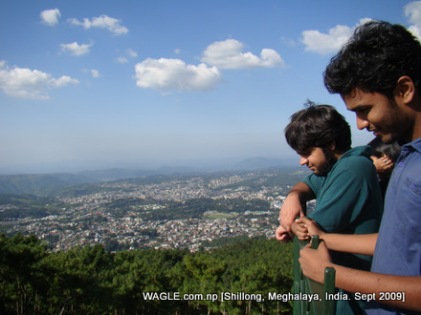 Shashwat and Pavan at the Shillong City view point 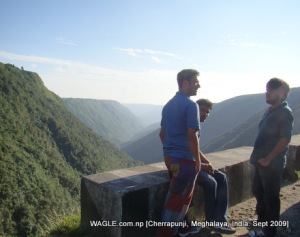 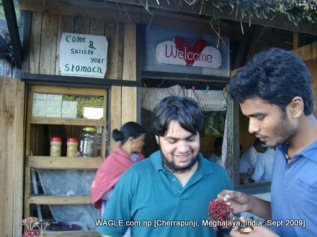 The greenery could inspire some people to write peoms

How vertical is the hill? 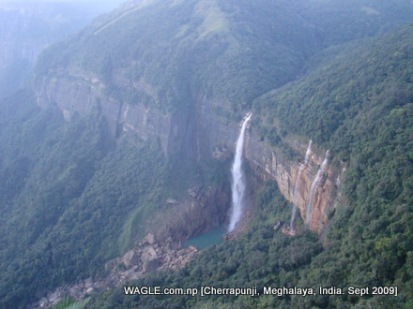 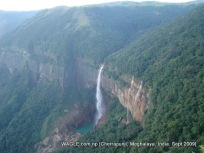 two banks of a fall 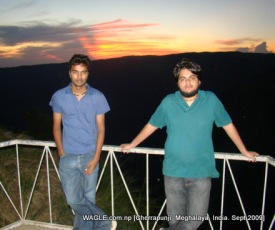 We made in just in time for the view 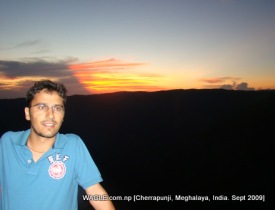 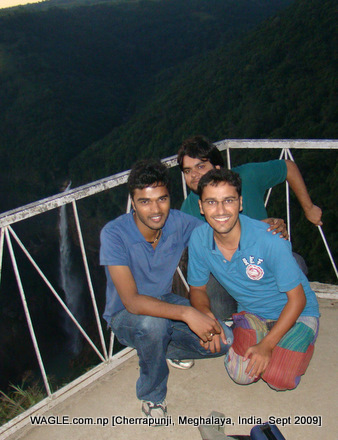 Dinner in a floating restaurant

Waiting for the train

Previous entries from the same trip:

1. In Guwahati, Assam: a Temple at the Hill

2. The Hills of Gangtok, Sikkim

6 thoughts on “Shillong and Cherrapunji”