I can’t recall when I did I first see/ride a rickshaw but I still remember that day 11 years ago when I rammed a cycle-rickshaw unto a culvert in Bardia National Park. After visiting the national park, I rode back to the bus park in a rickshaw. Somewhere on the way I told the rickshaw-puller to go back and let me pull. He obliged. I used to ride bicycles well, or so I thought. This thing had just one more tire. No big deal. I started paddling. The real rickshaw-wallah behind me was smiling. I was going good… until I started loosing balance and plunged into a culvert.

No human was hurt but the front wheel of the rickshaw had twisted beyond recognition. Smile evaporated from my ‘passenger’. He got off, inspected the tire which, I guessed, he didn’t recognize as the tire. “You will have to fix it,” he said in a low but resolute voice, “or buy me a new one.” Fixing that was out of question. That was not fixable. Second option would cost me Rs. 300. After the payment, I was left with Rs. 400. Bus ticket to Kathmandu? Rs. 370. Rs. 30 wasn’t enough to keep my stomach full for the next 15 hours or so. But I had no option. I was broke by the time I reached Kathmandu. I called a friend at my office to come to Kalanki to receive me. बिहान काठमान्डू त पुगियो तर राती खान नपाएर पेटमा मुसा खुबै दौडेका थिए ।  Some incidents can never be forgotten. A cycle-rickshaw may look like a bicycle but riding it is not the same as bicycling. The act of balancing is slightly different. The mastery over the art can only be attained by experience.

My understanding of cycle-rickshaw until recently was limited to the three-wheeled bicycle. Two people sit at the back while third one, seated at the front, paddles to perspiration. I saw another rickshaw in Chandni Chowk, New Delhi, a few months ago where four people could seat at the back, two facing the paddler and two the road behind.

I don’t know when I first heard about runner-pulled rickshaw but I am sure its only this past year. I wanted to see those rickshaw in Kolkata ever since.

An act of Googling also revealed that, in fact, runner-pulled rickshaw (or, in some cases, runner-pushed rickshaw) was the earliest form of rickshaw that is nowhere to be seen in the world today except in Calcutta. I also read the state government in West Bengal of which Calcutta is the capital is trying to stop this inhuman way of transportation. But rickshaw-pullers are resisting. It’s our means of living, they argue. They do not wear sandals or shoes while doing their job. That makes the scene even more appalling. People are divided in “supporting” them. Supporting as in supporting them to continue with their job (livelihood) and supporting as in arguing that they shouldn’t do this inhuman work but instead get themselves rehabilitated elsewhere (with or without another job). One argument is that these runner-pulled rickshaw are very useful when Kolkata submerges during summer making it difficult to travel by cars. 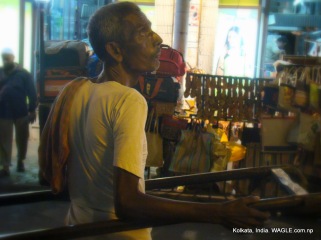 A rickshaw puller waits for passenger in Sudder Street, Kolkata

A rickshaw-puller waits for passengers in Sudder Street, Kolkata.

Waiting for a passenger is also tiresome for the rickshaw pullers

Runner pulled rickshaws have to compete with cars for road space

Compared to runner-pulled, these rickshaws are far more comfortable to ride, perhaps. 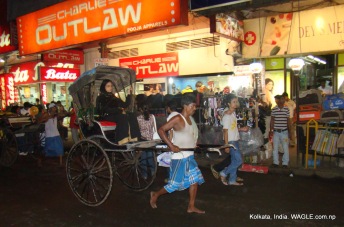 Students are the steadiest users of runner-pulled rickshaws in Kolkata

Rickshaws, especially the runner-pulled, come handy during summer when in Kolkata streets submerge

Previous entries from the trip:

3. In Guwahati, Assam: a Temple at the Hill

4. The Hills of Gangtok, Sikkim