Mahabalipuram (or Mamallapuram) is one of the most beautiful places I have visited in India in the past two years. The combination of beach and rocks AND the awesome monolithic structures makes the place so special that, by the end of the day, you will realized that a day is simply not enough to explore this historical site. It’s a small town, peaceful and touristy, where centuries old monolithic stone temples and carvings are scattered in walking distance from the beach. It’s barely an hour from Chennai, on way to Pondicherry (two hours from here).

The Shore Temple is a top destination because of its location, right on the shore as its name suggests. The rocky beach in front of the temple saves it from being hit directly by the water but that doesn’t mean the occasional wrath of the sea doesn’t harm it always. Over the centuries parts of temple have been washed away by the water, a book on town says.

The huge complex of rocks and carvings on the other side of the road is where we spent most of the day. The book Mahabalipuram- a journey through a magical land by Srinivaas and J Prabhakar that we had bought in Chennai came very handy while exploring the carvings and rocks. The writers could have done without their occasional ‘witty’ observations about the arts and carvings. The reader is interested in the structure and its historical significance, not the jokes and moral lessons that the writers prefer to draw from them. The research that they have done to prepare the book is commendable. I have used writers’ descriptions of structures and carvings alongside the relevant photos posted below.

Carved out of a hillock, a huge single rock, during the reign of Narasimha Varman in the seventh century this monolithic collection of temples- named Five Rathas to represent Pandavas- is located a few hundred meters to the south of the Hill Area.

It rained heavily while we were lunching (wonderful masala dosas) after exploring the Shore Temple and more than half of the main rock compound. We had to wait for about half hour observing drenched policemen, submerged road and congested traffic before heading to the compound where we began our tour by trying to carry the Krishna’s Butterball on our heads for camera. The Elephant Group carving is very cute. Very few people- but not the lovebirds, of course- reach there because it’s hidden behind a huge rock and some trees. Mahishamardhini cave becomes even more awe-inspiring when you think about the artists who must have toiled so hard for days and months to built such a thing from a single rock.

In no time you will figure out that the place is a popular dating destination for the lovebirds. You will spot them in corners, behind the rocks, in the trenches, and inside the caves declaring love to each other. Two such pairs wanted us to take their photos. We happily obliged. In a public bus that originated from a nearby bus stand in the late afternoon we saw many pairs who were heading back to their homes after spending a wonderful day in the massive compound of rocks and trees.

After spending about 24 hours in Mamallapuram we left for Kanchipuram. The famed Shankaracharya Math there turned out to be a hopeless building with unwelcome aroma. The yogi-looking staffs looked more like thugs than the facilitators of devotion. The famous Kanchipuram saaris, on the other hand, came with countless features. An autowallah took us to a shop in the evening where we found it difficult to choose the right one despite the helpful saleswoman. Knowing that we were from Nepal the shopkeeper man thought that we were heading toward nearby Vellore. 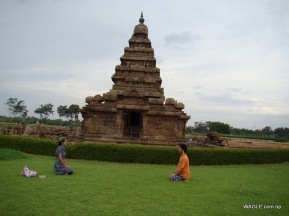 Two devotees pray in front of the Shore Temple.

Western gate of the second temple in the Shore Temple complex.

Lord Vishnu is sleeping behind the main temple building, inside the Shore Temple complex

Monolithic: all this from a single rock!

A few goats took refugee under the Krishna’s Butterball

That was really heavy.

You will have to be very careful while carrying that mammoth ball of stone on your head.

Monolithic: All from a single rock. At either side of the cave are two large panels, one representing Mahishamardhini and the other Seshasayi Vishnu. 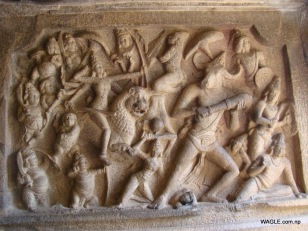 On the northern side of the cave is Goddess Mahishamardhini in the mids of her battle with Mahisha, the demon.

On the stone, by the stone- Everything’s monolithic here. 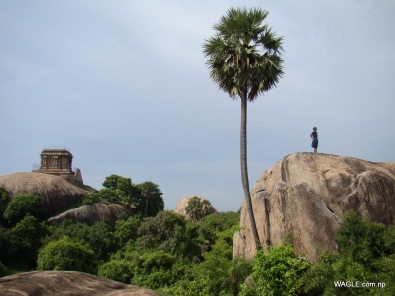 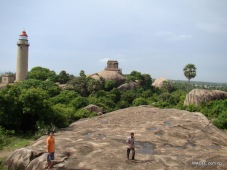 A jungle of rocks and trees

Part of an incomplete structure near Varaha Mandapam

It was heavy. Not an easy task to hold such a huge rock by your arms 🙂 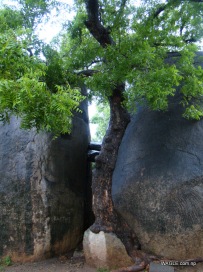 Opposite to this tree is a beautiful stonecarving of elephants- titled, Elephant Group 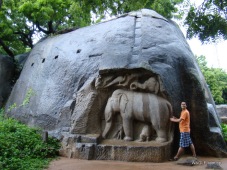 On the eastern side of the same boulder containing Trimurti (Brahma, Vishnu and Mahesh) cave (on northern side) is this sculpture of a group of animals.

Are they talking with each other? If yes, what would they be discussing about? (click on the photo for info on the sculpture) 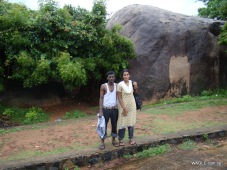 We met two couples, one not seen in the photo, in the huge complex of rocks who wanted us to take their pictures

Carved out of a hillock, a huge single rock, during the reign of Narasimha Varman in the seventh century this monolithic collection of temples- named Five Rathas to represent Pandavas- is located a few hundred meters to the south of the Hill Area.

The rocky beach of Mahabalipuram saves the Shore Temple from the sea water. 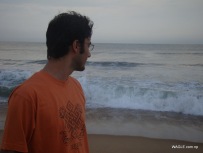 It’s so much fun to play with water at the beaches.

5 thoughts on “Rocks and Monolithic Temples of Mahabalipuram, India”