Pasta and daal, for free, in the name of Lord Krishna

Just as I was about enter through the main gate, someone waved at me and extended a warm invitation.

The white man, with a bald head and a huge tuppi, was wearing a yellowish dhoti. I was in central London at the campus of a well-known British school. I had gone there to see a Nepali-speaking professor. I had reached at the gate a good 30 minutes earlier after tiring myself of walking around and inside Hyde Park for a couple of hours. I needed to kill time.

I was hungry too.

Pasta, very thick daal and an interesting conversation were waiting for me.

The person who invited me for this surprise late afternoon lunch was accompanied by a man who looked like a Southasian and a white lady.

I could instantly recognize who these people were. A small board with words from Bhagawat Gita was stood on the food stall that stood on wheels. But I didn’t need to see that to conclude who they were. I happily accepted the invite. I was instantly given a plate full of food that I knew I wouldn’t be able to finish.

I ate along with other students who were offered the food in the same manner I was offered.

Some Indian students, while eating the same food as they stood not far from the food stall, were cracking some dirty jokes in Hindi.

I quietly listened to them while strolling around to suppress my laughter.

I couldn’t eat that all.

“Can I take a photo of you distributing food, please?” I asked.

“Yes,” said the Russian man. I was just guessing his nationality based on his ascent. Turned out i
I was correct.

“Oh, Nepal,” he reacted after I answered his question. “Ratna Park! I know. I have been there. Budhanilakantha. There is temple.” He was correct. Long time ago, I had gone to interview a Russian at the ISCON temple in Budhanilakantha. As far as I could remember, this man with thick tuppi looked like the Russian that I had met in Budhanilakantha in 2004.

The Southasian guy turned out to be a Sri Lankan. “I have a friend who worked in Nepal,” he said in a very excited tone. “He coached the national Cricket team of Nepal. Do you know Roy Dias? He is my classmate.”

“I know Roy Dias,” I told him, “But only through media. Not personally.”

“I believe he was quite a star in Nepal,” he added. “Many girls wanted to marry him. I understand that the boys (Cricket players, he obviously meant, I assumed) liked him as well.” 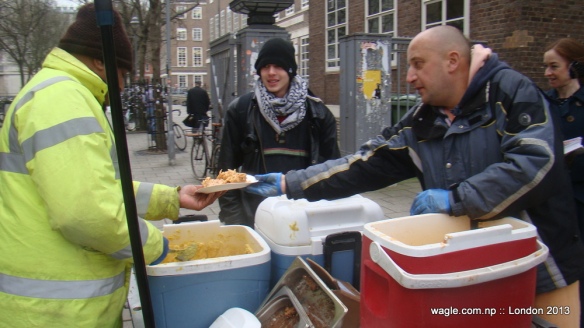 I wanted to talk more- actually wanted to listen more to what the Sri Lankan had to tell. He had stopped pouring daal on plates in his excitement to share juicy details of his friendship with Roy Dias. But it was very cold. I was shivering. And the sight of this bald and dhoti-wearing Russian (trouser inside) was making me feel colder. Despite wearing a good jacket (which the professor later rightly pointed out to be new) it was getting very difficult for me to stand there and talk to these interesting people. The lady, a British, was somewhere from the UK. They went to the gate of this School every day on weekdays and distributed food free to students and some occasional curious tourists from Nepal.

Inside, after waiting for several more minutes at warm reception reading about the School, I was ready to meet this professor who sounded very smart and clever. After the meeting, he took me to a Nepali language instructor who was, he said, teaching Nepali to a British diplomat whose name was familiar to me.

This entry, written and posted today, describes the events that occurred on 13th February 2013 in London.