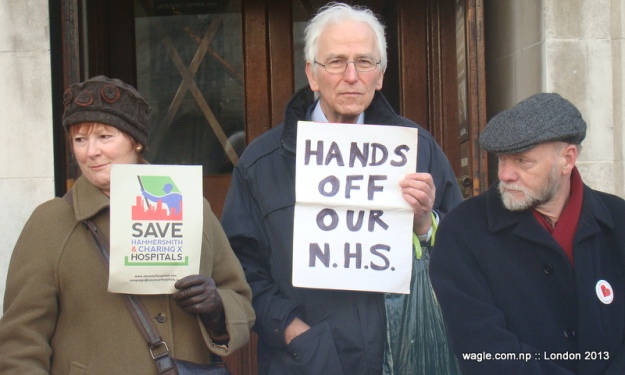 Protest: For an average Nepali citizen like me understanding the UK’s health care system is challenging. It is ‘complex’. Especially so if I attempt to compare it with our health care system in Nepal which is incredibly simple: Got money? Get treatment. No money? Die (unless your letter to a national daily newspaper begging for donation to transplant kidney touches hearts of some generous readers). One of the problems with our ‘simple and clear’ system is that our government doesn’t have enough money. That’s just a guess. Governments here give money to hospitals so that they can provide free treatment to qualified people. Now, if I understand correctly, national health service is facing cuts. People are not liking it. That’s why they are protesting. I saw one small group of protesters last week at the Parliament Square in London. Peaceful protesters. No shouting and sloganeering. No one was making any speeches. 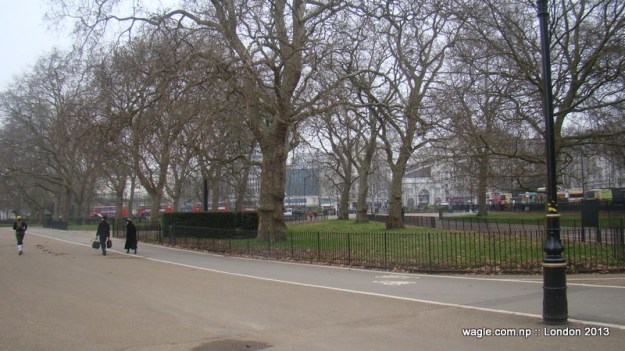 The Venue: Not even at the Speakers’ Corner in Hyde Park where I had gone a week earlier to see if someone was talking about some random issues. There were none. The place was empty. That was disappointing.

Tana Sarma describes animating activities that he saw at the Speakers’ Corner in his book Belayattira Baralinda in such a way that the description had remained with me for long when I first read the book during my high school days. A friend who spent 10 years in York and earned a PhD from the University of York before moving to Sweden recently reminded me of the same book just before I left Nepal. I re-read parts of it just before I arrived here. This time I didn’t find the book as interesting as I had found it last time. I was surprised to see that the book was actually written (and detailed events) in the 60s and that it was now one of the many travel books written by Nepalis on Belayat. But I didn’t change my decision to visit Hyde Park and the SC. May be I wanted to write an update to Tana’s version.

It was, therefore, disappointing to find the place empty and without a speaker. Or, a listener. A salesman at the sandwich shop near the Speakers’ Corner told me that he had seen one speaker addressing a small group of people a couple of weeks back. I asked someone here in the UK why there were no speakers when I visited the place mentioning descriptions in Tana’s book. He said that it could be because London has changed in the past forty years and that there was no need for such venue to express views because of other new mediums of expression. I wasn’t entirely convinced but had no supporting point to argue against his last point. A Wikipedia entry on Speakers’ Corner says:

Since [1872], it has become a traditional site for public speeches and debate, as well as the main site of protest and assembly in Britain. There are some who contend that the tradition has a connection with the Tyburn gallows, where the condemned man was allowed to speak before being hanged. Although many of its regular speakers are non-mainstream, Speakers’ Corner was frequented by Karl Marx, Vladimir Lenin, George Orwell, C. L. R. James, Walter Rodney, Ben Tillett, Marcus Garvey, Kwame Nkrumah and William Morris. Its existence is frequently upheld as a demonstration of free speech, as anyone can turn up unannounced and talk on almost any subject, although always at the risk of being heckled by regulars.

Not that I was expecting any of those persons (or their ghosts) to be speaking there or those who may become like them 30 years down the line. I just wanted to see how people deliver speeches here in open theater of democracy and crowds’ response to them. I also wanted to see how they protest through their speeches.

When it comes to protests, I am definitely not for violence and forceful imposition of strikes (bandas). But I do want people to express themselves on issues that they feel are important and worthy of having a say. A peaceful demonstration or expression which I believe is called democracy in action. This expression doesn’t necessarily have to be a protest speech. I am all for an environment that allows people to be able to go to a public forum, speak on something and gain attention/following of people! That’s probably easier to do on Twitter these days than at Speakers’ Corner of Hyde Park.

The concept of Speakers’ Corner, which exists in many cities around the world, inspires me to think of a protest venue. Kathmandu doesn’t have designated areas for protests. That is probably because the whole city has become one in past two decades. Therefore governments sometimes impose restrictions on certain places to make them free of protest activities.

Tundikhel is where people go and make speeches in Kathmandu but these speeches are almost always part of an organised effort (political parties etc). Tundikhel, as far as I know, doesn’t provide the atmosphere for a person to go there and share his or her ideas with people. I am not aware of any personal efforts made to attract crowd, share ideas and win some support.

I think when you reach places where people express themselves, you get to know what society is thinking or talking about. New Delhi’s Jantar Mantar is one such place where one can hear diverse voices of Indian people. This is what I had written about the place back in 2009: If you wish to see the great Indian democracy in action, go to a place called Jantar Mantar, near the Parliament House in New Delhi, where centuries ago a king had installed some planetary observation platforms.

A shop near the Speakers’ Corner in Hyde Park

A shop near the Speakers’ Corner in Hyde Park with SC on background. Empty tables await speakers and listeners. 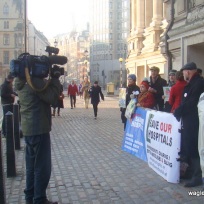 This entry was posted from York.

3 thoughts on “An Empty Speakers’ Corner of Hyde Park”