No prize for spotting me. Pic by Gokul Dahal

Shimla is a town of Monkeys who behave like Monkeys. But I will keep this album free of monkeys. I present here the atmosphere of the town- crowds and buildings- as I saw it.

During my two-year stay in Delhi as a reporter I traveled to most of the famous ‘hill stations’ in north India. Here’s the list: Darjeeling, Shillong, Mussoorie, Manali and Gangtok. Somehow I hadn’t found time to go to Shimla. I had imagined the place to be not drastically different from other hilly Indian towns. But some descriptions that I had come across (can’t remember the exact one at the moment) had put this place slightly ahead of others in the beauty contest of ‘queens of hills’. May be some political events (like the Shimla Agreement) provided some importance (and glamour) to the place. I also wanted to experience the toy train of Shimla (and wanted to compared it with similar one in Darjeeling).

For those reasons, and also because of its relative proximity to Delhi, I wanted to take a few days off to go to Shimla when I went to the Indian capital recently for business. Gokul, friend who did Masters in Computer Applications from Delhi’s JNU and is now based in Noida, agreed to tag along. We left the Old Delhi railway station in midnight to catch a toy train that left Kalka for Shimla in the morning.

My impression of the town? Just another hilly town filled with loads of newly constructed concrete houses that overshadow a few remaining colonial-style and better looking buildings. Very commercialized but not in a good way. Congested. The only good thing about the place is its central road (surprisingly not named after Mahatma Gandhi) where an evening walk can be relaxing. 24 March 2013

Next: A monkey stole my glasses. 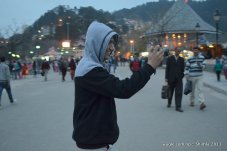 No prize for spotting me. 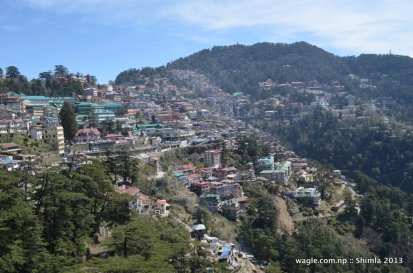 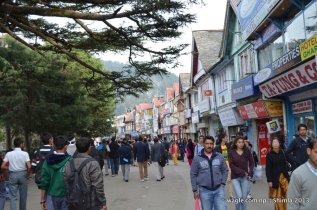 1 thought on “A Quick trip to Shimla”