Collapse of the Dharahara tower symbolized all quake-related devastations. But did the Bhimsen Stambha embody our pride and morale? 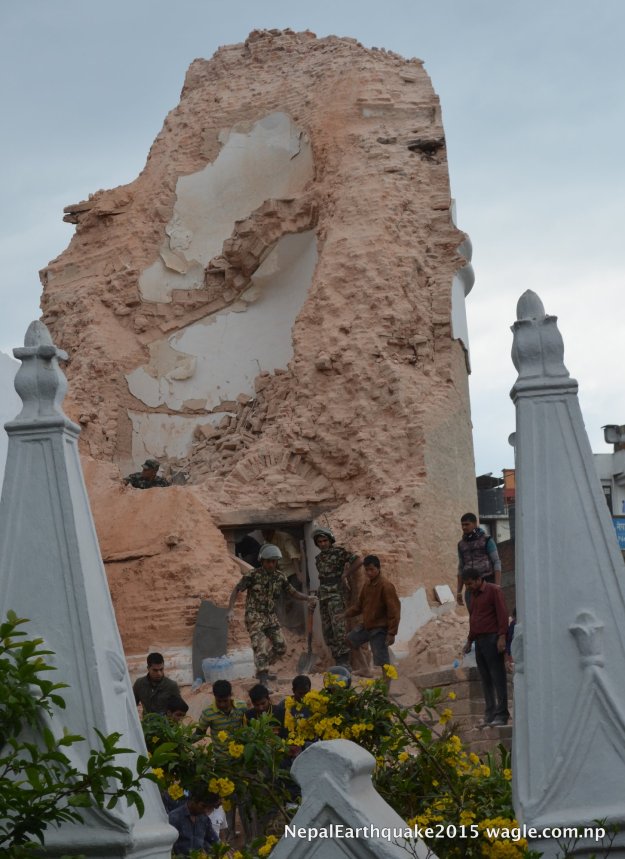 The #NepalEarthquake claimed thousands of lives. A million houses have been destroyed, most of them in rural villages. If there was a symbol of this destruction, it was the fall of the Dharahara tower. The tower’s collapse resulted in the death of more than one hundred fifty people. A few survived. This included some who were at the eighth floor circular balcony, enjoying the view of the city, when the quake hit.

Perhaps the most famous landmark of Kathmandu, the Dharahara tower is no more. A pro-democracy rally in 2005.

Judging by the way people have reacted to the destruction of the eleven-story minaret with Shiva’s statue at the top, I feel that its collapse symbolized all quake-related devastations. It was as if Dharahara was somehow indestructible (though quakes had damaged it in the past too). “Even the Dharahara fell, can you imagine?,” was a typical reaction.

A man from Sikkim who had come to quake-hit Sindhupalchok with relief materials told journalist Kiran Bhandari, “We heard in the news that even the Dharahara had collapsed. We could only imagine what might have happened to Kathmandu. We were shocked.”

In most post-quake writings and social media comments, the Dharahara has been implicitly or explicitly portrayed as the pride and morale of the Nepali people. Images of the destroyed tower along with the words “we will rise” have been circulated widely. This show of affection to Dharahara greatly surprised me because the monument had largely been ignored.

For many of us who lived in the distant villages Kathmandu began and ended with Dharahara. Yet, we could never relate to the monument. In the olden days, especially before the restoration of democracy in 1990, it was a really big deal for people in the villages like mine to be able to come to Kathmandu, even for a few days. To get an opportunity to go to Kathmandu, in those days, was the most exciting thing to kids– those who were fortunate enough to have guardians who could afford a visit to ‘Nepal‘. For those who couldn’t, the Bhimsen stambha, along with the Kathmandu city, was limited to the rhymes in the text books.

Like the city, the Dharahara tower too was far away.

Back in those days, other than symbolizing the city of Kathmandu, Dharahara didn’t mean anything to me. I didn’t know much about it. 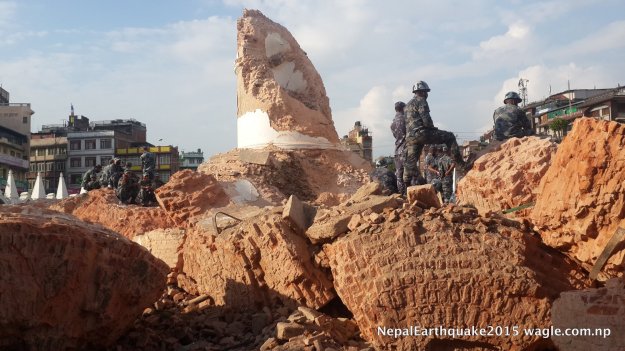 Policemen guard the ruins of the fallen Dharahara

On the #NepalEarthquake day, I reached Dharahara within 90 minutes, at 1:20pm. Soldiers and volunteers were busy rescuing those who had been trapped or buried in the debris. A few women were crying just outside the ruins. Their loved ones were inside the tower when it fell.

(Major part of this post was written within the first week of the 25th April earthquake.) 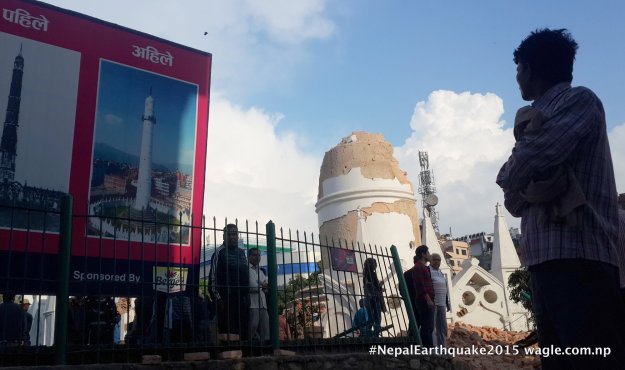 Dharahara destroyed. The hoarding board shows the images of Dharahara- before the great earthquake of 1930 (then) and after it was rebuilt (now). This photo, taken a day after the #NepalEarthquake, depicts the ruins of the famed tower.

2 thoughts on “What Did Dharahara Mean to You? (#NepalEarthquake)”