Men blow Narsinghas in Dhampus village, Nepal. According to this page (http://bit.ly/2ak5iWj), the name Narsingha means “buffalo horn,” but the instrument is much larger than the horn of a buffalo. The same page states: The Narsingha is a long curved natural horn with a conical bore, which varies widely in size, shape and usage in ensembles throughout Nepal.

A wedding ceremony? An auspicious occasion? Someone very important, a thulo manchhe, coming in the village? Play the panche baja (the five -musical- instruments). That’s still the case in many Nepali villages. These photos are from Dhampus village, north of Pokhara that offers beautiful views of the Annapurna range. When I was there last year around this time, the mountains were hidden in the clouds. Mesmerizing dhoon of panche baja played to welcome some thulo manchhes I was traveling with compensated the lack of great mountain views. I again saw panche baja played in a village in Lamjung earlier this year when to welcome a thulo manchhe.

END_OF_DOCUMENT_TOKEN_TO_BE_REPLACED 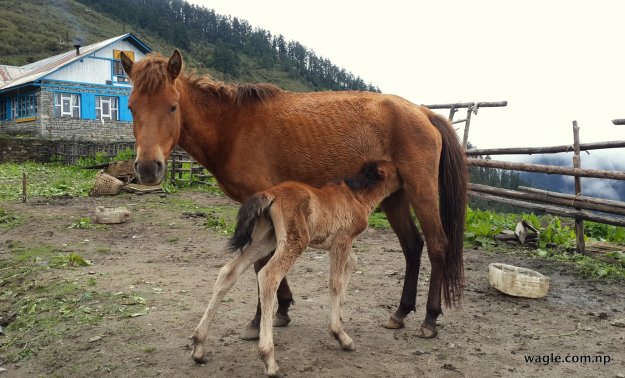 A mare breastfeeding a foal in Chandanbari, Nepal.

One recent afternoon I spotted a few beautifully decorated trucks not very far from the China border north of Kathmandu. They were stuck there. Mudslides had blocked a long stretch of the narrow road, or what we in Nepal unashamedly call a highway.

I asked a driver why his truck along with others had images of envelopes and the Nepal Airlines planes painted on their bodies. Some lorries had the flag of Nepal in various forms painted on them. “It’s just one of those paint templates available in the workshop in Kathmandu,” he said. “I like this one.” His truck had  a stretched flag of Nepal and the national flag carrier’s corporate emblem portraying the sky god Aakash Bhairav.

The Kathmandu-Kerung highway has become busier lately. The Araniko highway remains out of order since the April 2015 earthquakes. It means that business has shifted to Kerung, which brought along a large number of lorries on this road. As if that was not enough, the Indian blockade happened last year forcing even more trucks to run on this fragile, winding and difficult road. This is being expanded and improved. But that’s another story. 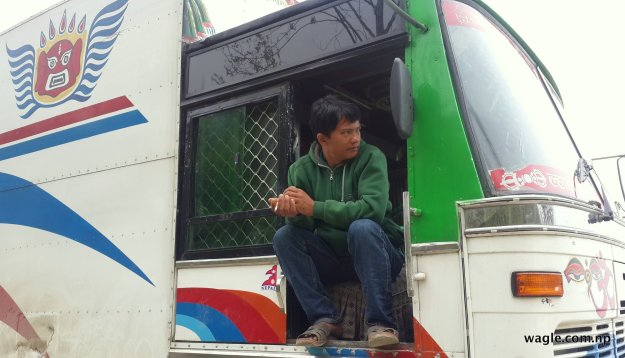 A truck driver waiting for the green signal.

I saw this lorry on Prithvi highway, near Kathmandu: 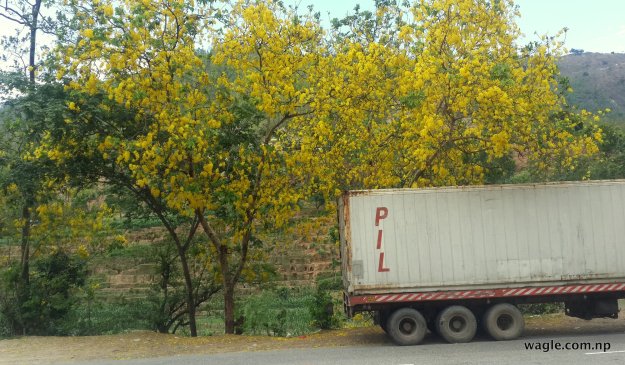 This one came from India.

Tourists photographed Mt Machhapuchhre from the Annapurna Base Camp as the last rays of sun hit the summit in a recent evening.

I went to the base camps of two of the best-known mountains– the Annapurna South and the Machhapuchhre (also known as Mt Fish Tail)– for the first time last week (11-17 March). Here’s what I saw and felt.

A Himalayan bowl: At the Annapurna Base Camp (4,130m, ABC) I felt like I was in a huge bowl. There were snowy mountains on all sides- their heights ranging from 8091 m (Annapurna-I) to 5,663 (Tharpu Chuli aka Tent Peak). They didn’t look very far. The 360-degree view of the Himals was spectacular. Mornings and late afternoons offered some of the best and dramatic views of mountains. Around noon was super hot– so much so that I encountered a bare-chested foreign trekker as I was heading up to ABC from MBC (Machhapuchhre Base Camp). It looked as if he and a bare-armed woman in shorts who was walking behind him weren’t worried about being sunburned.

Around mid-day was the time to take nap and rest as the unforgiving sun made it almost impossible to walk around and watch the mountains. Moreover, I wasn’t feeling particularly well. I had a mild headache and caught cold. Fortunately signs of altitude sickness disappeared after a couple of hours of rest. I experienced the difficulties despite spending 22 hours at MBC (3700 m).

First Rays Of the New Rising Sun on the Mighty Annapurna:
Sun caste its first rays of the day over the summit of 8091 m Annapurna I.

Weather conditions determine view in the Himalayas.Weather was fine when I was at ABC. Same was the case in Langtang when I was there in 2003. But lack of rhododendron flowers in the ABC trail was a big disappointment.

END_OF_DOCUMENT_TOKEN_TO_BE_REPLACED 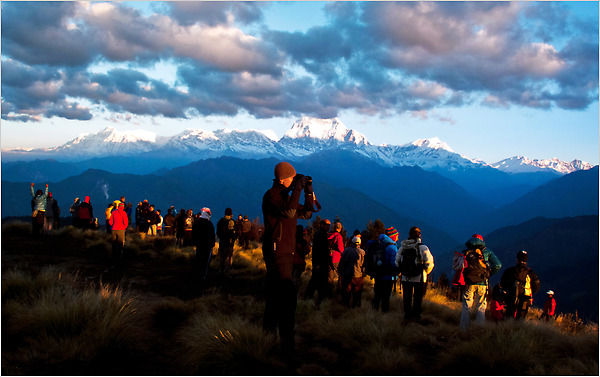 Sunrise on Poon Hill, with a view of 26,795-foot Dhaulagiri. Pic: Ethan-Todras Whitehill for NYT

The New York Times and Time magazine are working closely, so to speak, to cover Nepal in the past couple of weeks. First came Jim Yardley, former Beijing bureau chief of the Times now posted in New Delhi, with an analysis titled “China Intensifies Tug of War With India on Nepal.” That was in mid-February. Two weeks later Jyoti Thottam, Time‘s woman in New Delhi, saw, from Delhi, Nepal “Caught Between China and India.” [Prithvi Narayan Shah, the king who unified Nepal some 250 years ago, had realized that long time back when he said, “नेपाल दुई ढुङ्गाबीचको तरुल हो । [Nepal is a yam between two boulders.]”

Both stories are worth reading but they are not something that we can cheer about. This week NYT and Time came out with two travel reports that are certainly helpful to promote Nepali travel and tourism industry. The Times publishes an excellent travelogue from Annapurna Circuit while Time highlights Kathmandu Valley as a weekend destination. I was particularly interested in the Times story, by Ethan Todras-Whitehill, because I have done parts of the Circuit- Ghandruk Ghorepani (which counts as separate route that passes via Poon Hill) and Nar Phu trek (that touches many parts of the Circuit including Dharapani and crosses via Kang-la Pass that is only a few meters shorter than Thorang-la). The main photo- brilliant- published alongside the story- people enjoying the view of Dhaulagiri range and the sunrise- reminded me of my own moment at Poon Hill three years ago. END_OF_DOCUMENT_TOKEN_TO_BE_REPLACED

Om, Nama Shivaya! Are words needed to describe this photo?

24 October: We knew it was our last day of trekking. We were going back to home. We arrived in Patibhyangyang in a jiffy and from there, after eating curd and Chokofun, we started climbing up to Chisapani. Met three kids on the trail, interacted with them. It was an easy walk. Chisapani was just there, above us, waiting for us. We ate dal bhat. I liked the food but Suraj didn’t. The jungle, beautiful jungle, of Shivapuri national park started and the walking in the jungle trail was fun. I couldn’t see many birds this time as it was already afternoon when we reached the jungle. END_OF_DOCUMENT_TOKEN_TO_BE_REPLACED

The faces and expressions of the trailside Nepali kids. Part II [Here is part I]

22 October: Yes, he wanted to hide his face from my camera! Actually, he was teasing me and was also challenging me to take the shot of his face. “He couldn’t, he couldn’t,” he chanted when he thought I couldn’t take the photo of his face. But then… END_OF_DOCUMENT_TOKEN_TO_BE_REPLACED

The faces and expressions of the trailside Nepali kids. Part I [Here is part II]

22 October: We met a group of kids somewhere near Chisapani who were having fun by flying kite from a small hilltop. We decided to spend a few minutes observing them, talking to them and teasing them. We got a warm response! Here are different expressions and faces from the wonderful group. END_OF_DOCUMENT_TOKEN_TO_BE_REPLACED

23 October: A girl shyly smiles as I take her photo. She was going back to Kathmandu with her relative uncle along with other friends. We met them on our way to Chisapani. END_OF_DOCUMENT_TOKEN_TO_BE_REPLACED

23 October [Thangune Bhyanjyang]: It was a long day. We walked for almost 10 hours. We wanted to reach Chisapani but decided to stay here because, one, Chisapani wasn’t far from here and, two, here we found a nice hotel to stay. The trail was all downhill throughout the day, we descended about 1100 meters. END_OF_DOCUMENT_TOKEN_TO_BE_REPLACED