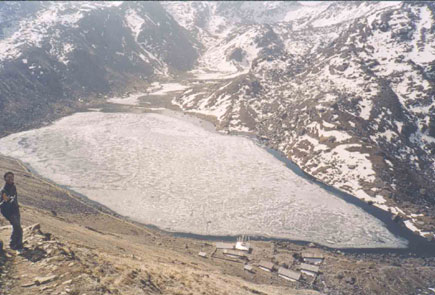 Dinesh Wagle and the Gosaikunda Lake. It took him about 20 minutes to reach there from the lake below

Langtang To Gosaikunda: A Travelogue! Here is a raw description of my trekking in Langtang area in the first and second week of Baisakh, 2060. I started my journey on Saturday, 19th April 2003.

The real journey- walking part- started from Syabru Bensi, a small town that is connected to Kathmandu by a improvised highway. This town is considered the ‘Base Camp’ for the Langtang Trek. The bus ride to Syabru from Kathmandu was bumpy, terrible, painful, and at times, risky. Limited numbers of buses operated in a day on the highway. Dozens of passengers sit on the top those buses.

Starting with a Spirit: After a small ‘hitch’ in the morning (there was some confusion regarding correct path), our team took the ’speed’ gradually. The team originally included Dutch Mathanja and her boyfriend Tim, his mother Tini, and a Dutch girl of Nepali origin: Anu. In Syabru, Andrew, an Australian university professor was included as the sixth member. Soon, he became so friendly that he, Anu and I were leaving rest of the team from the second half of the second day. We three made it to the Kenjin Gompa in two days while others took half a day more.

Initially, I was suspecting Tini , a loving old woman, could go all the way to Kenjing Gompa. She showed the sign in the very first day that she could do that without big difficulties. On the other side, the Math-Tim pair was soon starting to have some romantic moments. Above all, they were walking together after a gap of “some months”. Andrew, a humorous and a kind man made our travel enjoying. He was in Nepal to oversee a project in Kathmandu by his students, and had decided for this quick trek before going back to home. When Anu and I were ready to go to see the Gosaikunda Lake, he provided us with his trail map. Oh yes, how could I forget that he also sponsored our dinner in Kenjin Gomba, Langtang.

On way, we meet several trekkers. An Australian woman was returning from Kenjin Gomba with her child on the back. Another Australian family was soon walking with us. Peter, the family head, teaches in Kathmandu University. His wife Anna and two clever sons Michael, 8 and Philip, 6, are also living with him in Nepal. Now, they are also Langtang. The younger kid speaks good Nepali. These brothers are studying in Nepal for some time. Yes, Philip was carrying his baggage himself. Michael too. According to his mother, he really wants to see glacier. Next day, when we were returning from the glacier, I saw these smiling kids on the back of a horse at Kenjin Gomba! After about an hour, when I saw them returning from the glacier, Michael was not feeling well. The reason went like this: he fell down from the horse on way to the glacier and they were not able to reach glacier. “Never mind Michael”, I tried to console this kid. “I was also unable to reach the glacier an hour ago!”

4 thoughts on “Langtang To Gosaikunda: Starting With a Spirit”