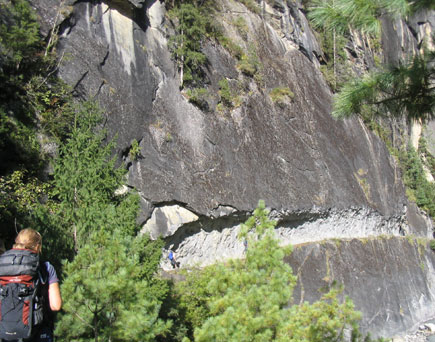 “You live in a beautiful country!”: Rocky trail on way to Meta, the winter settlement of Nar village.

Riverbed (near Dharmashala): Along with Koto, this morning, we left the popular Annapurna Circuit trail and headed north-east on the less traveled road. This is the Nar Phu trail. I liked it. It’s beautiful and different. I like to travel at slightly higher altitudes. Not much heat, lots of shades and you feel better.

Immediately after crossing a suspension bridge, we encountered a beautiful rocky trail that went from a steep and huge rock with Nar Phu khola at its foot. Well, the man made rocky trail didn’t impress me alone. “You live in a beautiful country,” Margriet Van Laarhoven, the bespectacled little woman who walked like a rabbit, gave the verdict after taking a snap of the trail. “Oh..ya,” I responded. And I told myself, “And one of the poorest too.” Margriet also knows what I told myself but beauty beats poverty in this part of the world. People learn to smile in poverty. And Margriet is not alone in her family to be impressed by this beauty. Her son and daughter have trekked in Nepal separately. She was always fascinated with their description and this time, taking vacation from her office in Edmonton, Alberta (Canada), the Dutch lady came to trek. She will be going around the Annapurna Circuit, crossing over to Kang La Pass, after doing the Nar-Phu circuit.

Wanda decided to camp earlier in the day to avoid sharing a camping place (in Meta) with another group that was also going to Nar Phu area. That was fine and we set up tents in a riverside area inside the jungle. The place has been named as riverbed in maps which is the most beautiful camping spot so far. There was a bee hive on the steep rock on the other side of the river, just opposite to where we were camping. That instantly became the center of attraction among us. People talked about the possibilities of going there and collecting honey. But the river was the biggest obstruction, not the difficult rock!

We did singing and dancing this evening too. I tried to add my voice to the dohori (duet) songs that boys and, for the first time, porter girls were singing. Then the dancing started. Everyone started shaking their body and twisting their waists. 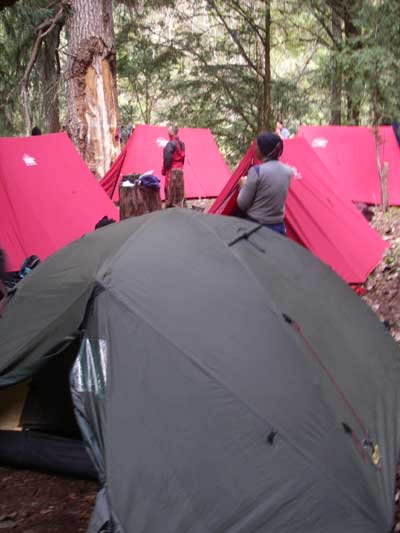 Camping in the jungle, on the riverbed, on way to Meta. Pic by Wanda