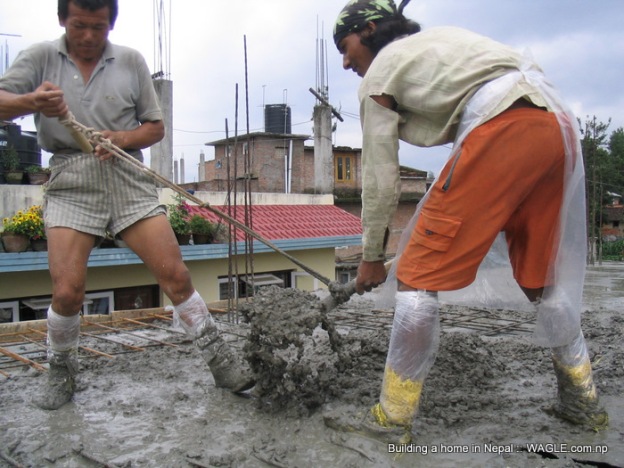 Building a house is a lovely notion. Wow, you are building the basic block of your life. I have never built a house yet as I live in my parents’ house. The general trend in our society is that you don’t build a separate house and start living separately unless you are married and your spouse and you want to live away from parents. No apartments either as there is no such tradition in society though the trend is slowly taking pace in city. So mostly its joint family: I was born in a big joint family that had members up to 20 (or more if you count again!). Today I live in a family with five members in total.

Recently my parents decided to instill some life to our house by adding a few more rooms and beautifying it a little more. There I got the opportunity to observe the house building process for the first time in my life. I have seen many houses being build in different places but I hadn’t given close attention the process. In our village in Duragaun (Ramechhap), the standard method of building a house is constructing walls of stones and mud and covering them with the combination of woods and mud and covering the roof with stone slabs. 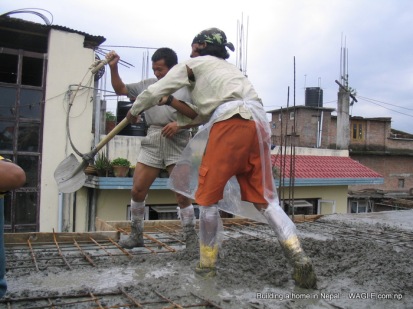 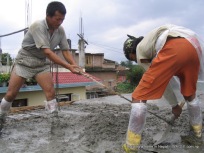 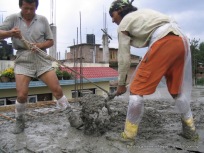 In the city it’s different. It’s all about concrete. Put one brick upon another. Hmm. It’s easier said than done. I learned that even if the houses are mead up of bricks, it’s certainly more than putting one brick upon another and throwing cement in between them. Apparently its nothing more than that but when closely inspected, the process involves meticulous calculation of putting right brick on the right spot in right way and cementing them precisely the way it should be. When I closely watched laborers working in my house, I learned that even those supposedly “unskilled” people need to have skills that many supposedly “skilled” do not possess. I was particularly awed when I saw two of the laborers struggling to get the right measurement to fix wooden window frames on the brick wall. The same happened when they were trying to set up wooden door frames. Never underestimate anyone’s work. That’s the lesson I learned watching those laborers in action. A small mistake could result in a serious problem that might jeopardize the whole structure. It will be very hard to afford any such mistakes.

Rich people can hire engineers or supervisors to provide necessary guidance to laborers but, in my case, laborers were their own guide. I noticed that no one in the locality who was building houses had hired an engineer or a supervisor. The laborers told me that they never took any classes of construction. All they learned was by watching others building houses and they learned as they also tried to imitate others. How do you fix the staircase in such a way that all steps are equal in height and width? How do you make sure that the wall is completely straight?

Laborers have their own expertise on different fields. One is an expert on constructing walls, other at plastering cement on the walls, the other at making wooden window frames and door frames. Some are experts at setting up the structure that holds the whole concrete and iron rods which would later be turned into ceiling of the building. Building a house, even a smaller one, involves right coordination between all those experts and their helpers. Usually the contractor coordinates that but then there are different contractors for different works. So the responsibility mostly falls upon the owner of the house.

It’s a long and tedious process too. It’s already been more than 8 weeks that the process hasn’t come to an end. Will I build a house in future? Hmm, may be not!

[WSJ Note: With this post, four part series of Excitement Blogs has come to a great end if I may say so. Jumla Kalikot, I am coming.]

5 thoughts on “Building a House in Kathmandu”