I have been living here in Jangpura all these months (15 in total) making it my Base Camp to explore India, particularly Delhi. This expedition has been full of exciting experiences and successes so far. The neighborhood is near from the city center and also the famous landmark India Gate (5 km). The place is easily accessible (hope the propertywallahs won’t increase the rent price in the neighborhood after reading this), surrounded by two major roads (Mathura and Lala Lajpat Rai) that connect the place with rest of Delhi. The area is filled with parks and is green.

Developmental stuff is going on around the area. As much as I am looking forward to the opening of Eros cinema here, I am also eagerly waiting for the inauguration of Metro station in Jangpura so that I don’t have to go all the way to Pragati Maidan (5 km) to catch a Metro train. If that happens, I can go to Chandni Chowk daily to eat dahi valla and some other mithais.

Eros is a very famous landmark here. “Tell the auto wallah ‘Eros cinema ke paas’ [near]” is what I must tell to anyone who wants to come to my home from other parts of Delhi. What I have heard from my very informed landlord’s even more informed son is that the theater caught fire sometime ago and now they are rebuilding it as a modern multiplex with shopping mall and all. The fact that it is only about 9 minutes walk from my home makes it appealing. The nearest theater from my home is 3C’s in Lajpatnagar where I have watched three movies in the past year: Slumdog Millionaire, Rocket Singh: Sales Man of the Year, and Gazini but not in that order. The best thing about having broadband connection is that one can download movies from Web. Thanks to the creators of torrents.

Eros is located, by the way, just a stone’s throw from anther super famous landmark of Jangpura Extension. Sharabi ka dukaan. Okay, that should be sharab ka dukan but since the dukan is crowded with a lot of sharabis I think I can say that is also a sharabi ka dukaan. I wonder if the dukandaars are a also sharabis. I am not. But I have to pay a visit there every now and then because some of my friends who pay a visit to me happen to be sharabis. There’s another sharabi ka dukaan under the Jangpura side of Defense Colony flyover where I go only when I am out with Satish Bhaiya (who has already been referred to at least once in this post). My observation says Eros sharabi ka dukaan is far more crowded and popular than Flyover sharabi ka dukaan. May be the taste of the liquor is different? No idea. But I am sure nowhere else but in these two places can one find sharab in the whole of Jangpura.

Chaos rules in these two places on the day before the dry day (no alcohol day) in Delhi. Dry day is the day when one can’t sell alcohol but apparently consume as much as the soul desires.

Adjoined to the Eros sharabi ka dukaan is another super duper famous landmark of Jangpura (this is indeed a place of landmarks). This is called Om Hotel. This is not same as Oberoi Hotel that is merely a kilometer or two away from Eros on Zakir Hussein Road that ends at Indian Gate circle. Om Hotel is famous for food that is priced exorbitantly. Exorbitantly I say compared to the price of same Rumali Roti available in nearby (15 min walk) Nizamuddin Dargah eateries. Food is clean and packed well, another thing in which Om appears to be reputed for. But the price, I must say, is way too much.

One has to be very careful about the name Jangpura so as to avoid confusion that may lead to long and tiresome walk. Jangpura B meaning Bistar (a Sanskrit/Hindi/Nepali word that means Extension) is NOT same as Jangpura Extension. Coming from India Gate via Mathura Road, Jangpura Ext lies on your right while Jangpura B on left. In one of my initial days of coming to this town, I got off at Mathura road and walked towards Jangpura B. Something looked very different so I told a dukandar the place I wanted to go. He showed me the correct direction.

Here comes Bhogal. Sometimes it’s very confusing as to where Bhogal ends and Jangpura Extension begins but still I feel Bhogal could be one of the reasons for me to like Jangpura. Without Bhogal, I tell you, Jangpura would be lifeless. That’s why I have told someone here who lives with me NOT to underestimate Bhogal, never! Bhogal lai kam naaka (in Nepali), bhogal ko najarandaaj mat karna! (in Hindi). It offers everything that one can easily see in Lajpat Nagar Central market or any other consumer markets for that matter. The only thing is you have to walk by all the alleys of Bhogal and look at the shops carefully to find what you are looking for.

What one can easily see in the evenings is the momo stalls of Nepali boys. Some panipuri (golgappa) stalls are always crowded. But the toughest of the competitors in the whole of Bhogal must be those guys who run Suresh Chatwala and Kadimi Dukan. Encroaching the roads on two sides, they have set up their shops that sell samosas, jalebi, imarti, kulcha and much more. A small lane separates them. Standing on that very lane (and also the main Central Road), people eat foods they sell. I have tasted samosas from both of the shops and lately I have liked the ones offered by Suresh Chatwala. They provide pomegranate grains along with chatni.

But for imarti or any other sweets, I must turn towards Kadimi. There, I often eat chhole bhature. On each occasion, after eating, I promise not to eat again condemning them for putting so much oil in there. Last month, we we were coming to home after our Varanasi trip, we stepped in to Kadimi for chhole bhature and samosas. Again, it was too oily.

Three ATMs on this side of Bhogal- from State Bank of India, J&K Bank and Canara where I have an account with no or little money- are dysfunctional most of the times. I use my Nepal Investment Bank ATM to draw cash but there’s hardly any occasion when I don’t encounter problems in either of the ATMs. Fourth one, of HDFC where I have account with no or little money, claims to work 40 percent faster in flashy advertisements. But that is the biggest lie I have ever come across in Banking history. That is, by far, the MOST SLOWEST ATM in the whole of Delhi. HDFC, take note of this.

As one comes towards my home (in B block), you will automatically notice Modi Pastry on the left. My relationship with the shop is bitter-sweet. It’s more sweet actually. In the mornings, this old Sardrji who is a friend of my landlord Uncle Mehra sits at the counter. Whenever I go there, he offers me chai, pani. Each time I have to humbly refuse the offer. He also gives me discounts occasionally making me feel really good. Sometimes when he meets me on the street, he teases me: yar, saadi ke baad kaisa chal raha hey? [How are things after marriage?] If I remember it correctly once he winked as he asked making me blush. He is one of the oldies- including Uncle Mehra- who gather at Block B park in the afternoons and talk, crack jokes and make fun of other people for an hour or so. Regardless of the discounts (and another gloomy looking sardarji who always yells at workers there) I have been a regular at Modi for pastries, Maaza, puffs, cookies or pauroti (bread).

Talking about bread how can I forget to mention the Afghan bread that appears to have caught Jangpura/Bhogal by rage at least in the Afghan community recently. Two eateries have sprouted up in the past couple months or so (about 100 meters from my home) in Bhogal. Each of them have made it to the newspaper columns. Both of them are very near to each other and to Modi Pastry. One is without any signboard and I always see a big crowd in the mornings waiting for their piece of excellent Afghan bread. I tired it once. I liked it. Seems like I am not the only non-Afghan to like the bread. Chinki Sinha, a journalist with Indian Express who shifted to Jangpura Ext from Nizamuddin West a few months back, was offered those breads “at a friend’s place.” The friend “suggested” her to “visit the bakery, which [she] did.” When journalists visit a bakery, they just don’t eat. They write a story about that as Chinki did for the Express.

A few days before Chinki’s story appeared in the Express, I had been pleasantly surprised by a story in the Hindu by Rahul Verma about Kabul Restaurant, another eatery near the bakery. There was a south Indian restaurant at that place before Kabul Restaurant replaced that. Since I have turned a vegetarian these days I haven’t gone inside the restaurant that boasts of chicken tanduri etc on its menu board that stands at the gate. I always read the menu every time I pass by Modi Pastry. I think I have noticed names of some veg items too. I might go there someday.

So many words already spent on Jangpura-Bhogal. The point I wanted to make is simple, I am enjoying living here. Of course, there are other people too who love living in Jangpura.

Here’s a Jangpura-Bhogal Album. Almost all photos are taken by iPhone in the past year. Click on pics to enlarge. 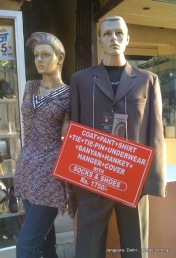 near Mathura road, Bhogal market. i could still see this thing last week when I was passing by the shop.

an auto hits a rickshaw

an auto hits a rickshaw and people argue

double storey, bhogal. just across the road from where i live

the house on the left has been demolished. A brand new building stands there now.

that’s where i live

Municipal Corporation of Delhi doesn’t want kids to play cricket in the park. so no games these days

Kids are not allowed to play inside the park these days. Sad, I guess.

at the block B park

There was a big party in my block last night with bhangra music going on until late night. This is from last year.

With Sardarji (l) of Modi Pastry, Bhogal. A very nice-hearted man, he usually gives me discounts.

They work as nighttime security guards in Jangpura area

Nepali migrant workers in Jangpura. They live in nearby Jalbihar. They had come to eat momo in a small eatery where a guy from Nepal makes the dish. 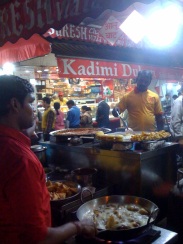 side by side, both eateries serve excellent street food.

donkey’s pissing. that’s what written over there in hindi

taken two days ago, this photo shows a poor camel struggling to stand near the nizamuddin/lodhi road flyover.

a flyover in the making 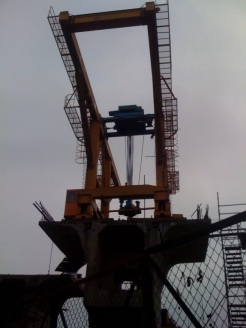 We Are All Shah Rukh Khan
Hello Saar! I Clean Your Ear?
Loading Comments...