Hello Saar! I Clean Your Ear?

I was sitting outside the Jama Masjid, on the stairs that lead up to the main entrance of the mosque. Gokul was sitting a few stairs below on my left. We were both watching the magnificent Red Fort in front of us. At least I was watching until something pulled my attention away from the Mughal palace.

A guy was trying to pull Gokul’s right ear. Gokul was trying to save himself and his ear from the ‘aggressor’. With a needle-like object on his right hand, as he tried to pull Gokul’s ear while Gokul tried to move way, the man definitely looked like an attacker. In the next instant I realize that I was not witnessing a fight. The ‘assailant’ wasn’t really attacking Gokul. But he definitely wanted to be in charge of Gokul’s ears for a while. He wanted to clean them. He wanted to do his job. He was an ear-cleaner.  Ear Doctor of Delhi.

A professional service provider wouldn’t behave like that with his possible customer. An ugly surprise and irritating insistence. The guy’s strategy clearly failed. Neither Gokul, nor I wanted him to clean our ears. As Gokul declined his offer, the boy came toward me. “It will take no time. Just Rs. 15. You just sit there and I’ll do the job with no harm whatsoever to you,” he said. “You will feel very good [after cleaning].”

Thankfully, he didn’t say what a person says he heard from a desperate ear-cleaner of India: “His final line to me as I walked off:” writes a man on a web forum. “‘You must try it -it is better than having orgasm!’”

Talking about the ‘ugly surprise’, I realized after Googling that Gokul wasn’t the only one to be surprised like that. Seems like ear-cleaners all over India have same modus operandi. Read this from Graham the backpacker:

Just got back from Goa, where we were approached many times by men pointing to our ears & waving their Doctor’s licence.

My girlfriend stopped one time in Anjuna, where the guy said he was just going to look in her ear, & before she could stop him he’d poked something into her ear & produced a massive ball of wax, which quite obviously was not hers !

I was pretty pissed off, so we avoided these guys from then on, but we met a woman travelling who’d had it done & said she felt much better for it. [Emphasis added]

A couple of months after the Jama Masjid incident, I was walking on a busy, crowded, animated and amazing street that originated from Chawri Bazaar chowk, Old Delhi. I’ll post my observation of the place and photos next. For now, I am presenting some pictures that I took of an ear cleaner in action. Rather, most of the following photos present the facial expressions of the person whose ears are being cleaned. How’s he feeling? I didn’t interview the man. Disturbing the cleaner was out of question. This is the job that he has to struggle to find these days. More and more people have found new ways and technology to clean their ears. My Internet research revealed that this is an age-old tradition from the Mughal times when royalties would hire men to clean their ears. The preset-day ear-cleaners who are found in some parts of Old Delhi are descendants of Mughal-era royal ear-cleaners.

The ear-cleaners, along with the barber, found a special trust with the Emperors for they were the only ones who could twitch the King’s ears and live to tell the tale! Proofs of their services to the Moghul Emperors can be found in the literature and legend of the day.

The ear-cleaning skill is in their blood that is passed from a generation to the next.

“I learnt the art from my father and my father from his father. We have done nothing else. This has always been our family business,” says 25-year-old Mohammed Mukhtiar, who hawks his unique service outside a cinema hall in Chandni Chowk. Source: The Hindu, Nov 2002

“This profession was handed down to me by my father, and this has been going on for centuries now”, says Munawwar Alam or Chotey as he is popularly known amongst his friends. 30-year-old Munawwa has been in this profession for the last 15 years. Source: Press Trust of India (June 2005)

The ear-cleaners (or ‘kaan maeliye’ or ‘kaan-saaf-wallahs’) are a declining lot. The profession doesn’t give them respect and enough earnings. It’s difficult for them to find new customers (thus the surprise attacks, I guess) and number of old, regular customers are declining.

Chenu, 21, says he is in this this profession for the last 8 years. He can be seen loitering around a cinema hall here coaxing the cinegoers to get their ears cleaned. [Though he claims he is better skilled in cleaning ears than professional doctors] Chenu admits that finding first time customers is very difficult. Chenu earns about Rs 100-120 a day [and] is very clear in his mind that he will be the last person to carry the mantle of his forefathers. He talks of lack of ‘izzat’, and the lack of interest of the public in his profession as the reasons for the decline of his tribe. He has a two-year-old son. “Dekhte hai, kismat ki baat hai (let’s see, it’s all luck). I want him to study well join a good job. But I will not allow him to do my job.”Source: PTI, July 2005

The ear-cleaners are walking clinic. They carry a box that contains some ‘instruments’ and oil. Some of them wear red skull cap, according to a report, though I didn’t see the Jama Masjid wallah donning that.

They carry two ‘auzaar’ (instruments): a ‘chimti’ and a ‘salaai’. Chimti is a long needle like object, which is slightly flat at one end and this is used to slice through the wax and scoop flakes out of the ears. The salaai is basically used for cleaning the ear and applying oil after the flakes are taken out by the chimti. Before applying the oil, which the ear cleaners claim to be ayurvedic, the ear cleaner stuffs the salaai’s end with small amount of cotton and dips the same in the oil. More often than not, mustard oil mixed with garlic and turmeric powder is used. 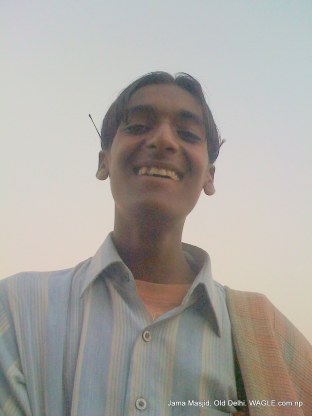 so you were carrying this much of junk in your ear?