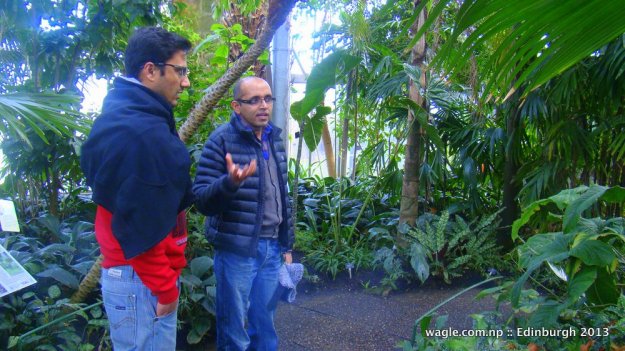 Bhaskar Adhikari who works at the Royal Botanical Gardens as a researcher gave me a near-detailed tour of the beautiful Gardens. Pic by Amit Gautam.

It was Amit’s idea. He knew someone who worked there. That someone, I later came to know, was Bhaskar Adhikari (PhD from University of Edinburgh). Bhaskar worked as a researcher at the “Flora of Nepal” section of the Royal Botanic Garden, Edinburgh. He had agreed to give us a tour of the Gardens. Fantastic. Thank you Bhaskar ji.

We were at the reception, collecting our visitor’s passes and chatting with Bhaskar someone hugged us from behind. This was Mark Watson (PhD) who headed the flora section and edited the Flora of Nepal (“the first comprehensive account of Nepal’s vascular plants.” Three of the Flora’s 10 volumes were published in September 2011.) “With about 7000 species of vascular plants,” the section’s webpage states, “Nepal is a globally important biodiversity hot-spot.” A few months back, I was indirectly involved in organising program in Kathmandu that also involved Watson. But we hadn’t met. I had completely forgotten that he worked here at the RBG. 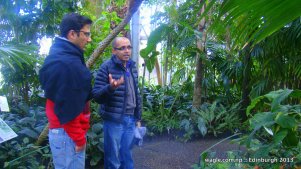 Bhaskar Adhikari who works at the Royal Botanical Gardens as a researcher gave me a near-detailed tour of the beautiful Gardens.

Amit Gautam, who will soon become a PhDwallah, connected me with Bhaskar who works at the Gardens.