I was traveling to Baitadi from Dadeldhura on the day after Dashain Tika last year. Traffic was thin on the road that spiraled through the rugged hills of, among others, Ghanaghashya. The Taranath Sharma essay “Ghanaghasya ko ukalo katda (घनघस्याको उकालो काट्दा)’ that I had read in school (10th grade) occupied my mind space as I descended. In that essay Sharma details his difficult journey that he undertook over the Ghanaghasya hill in the 60s. Coincidently, Nepal magazine had published a follow up essay that week by Sharma titled ‘Feri Ghanaghasyako ukalo katda’ (फेरी घनघस्याको उकालो काट्दा). In the second essay Sharma writes about the changes he saw in the region during a trip last year. (Here’s an article in Nepali that details the changes.) 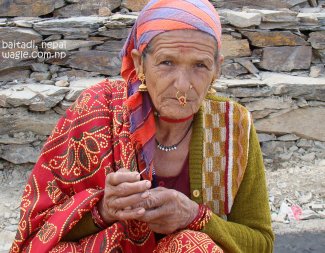 First, she takes out a matchstick

With beedi between her teeth, she takes a look at her surrounding. No, the bus she has been waiting hasn’t arrived yet. There’s plenty of time to kill.

Despite the long experience of lighting up beedis, the first attempt failed this time around. Need to take out another matchstick.

Reflect upon the tiresome journey ahead

With that bit of background info I present seven photos of a woman that I took as I was about to enter Baitadi district. It wasn’t hard to guess that she was waiting for bus at the highway intersection near the border that separated Baitadi from Dadeldhura. I assumed that she was going to the third way- towards Bajura. Our Bolero halted for a few minutes at that intersection giving me enough to capture the lady in my camera. Only regret is that the Bolero didn’t stop long enough and, because of that, I couldn’t talk to her.

PS: Smoking seriously hurts your health. But you will not stop smoking, I know. Puffing a cigar & a cigarette.

Guess [Which] Paper She is Reading
Khabardar! 74 Days to Draft Constitution in Nepal
Loading Comments...