(Oct 22 note: Photos related to this post will be posted later this week.)

Ten minutes to the walk, I felt a pinch on my knee. Left side of the left knee.

It was 6:40 am. I was heading downhill to Kankri. I was told that the village was about 30 minutes of walk away. There was one brief moment of confusion when I couldn’t find the path that disappeared into the excess soil from the road work. I made a couple of jumps and found the path.

I felt another pinch on the same spot of left knee. I thought about yesterday’s walk. I could feel pain on calf. And on both legs. Thighs were hurting too. But this particular pinch, piercing, was different. Walking more is the way of cure for a calf or thigh pain. Muscles get used to with the process in a matter of hours. I wasn’t worried about that. But this pain had a needling effect.

And it started to grow as I continued to walk. Soon I was limping. It took me an hour and a half to cover the trail that others had said I would do in 30 minutes. I think I could have walked that distance in 45 minutes if my knee hadn’t let me down. Now I was dragging myself with great difficulty on the route stopping mainly to give the knee some rest and to take photos of two dense neighborhoods of Kankri village. 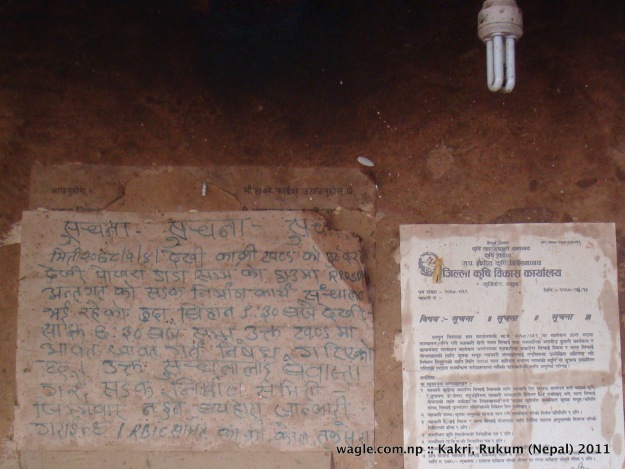 By the time I reached the village I had realized that I must hire a porter to carry my baggage. But I knew that the rucksack, weighting around 7 kilos, wasn’t the real problem. I understood that I was into a serious problem that had very less to do with the load on my shoulder. Still I asked about porter with the first man I encountered in the village. All unemployed boys in the village have been employed these days at the road project, the man said. I had slim chance of finding a porter.

I dragged myself to the hotel situated at the end of the village, close to the school building which was on the west. On the east was a river over which a bridge had been put up. If I wanted to go to Thabang, the Rolpa village where the Maoist conflict had begun in 1996 (and was developed as a model village by the party), I had to cross the river and walk for about 3.5 hours. The mostly uphill trail went through a dense jungle.

A serious fight had erupted inside my mind. Didn’t I really want to take that route and go to Rukumkot via Mahatgaun? Or, should I stick to my original plan that was to go to Rukumkot directly from Kankri? My weak knee defeated my desire to go to Thabang.

I decided to stay at the hutel for longer than the usual duration of rest. My enthusiasm to walk had now been seriously challenged. I also realized my limit. I ordered half a plate of chowmein. I munched three freshly baked doughnuts. I drank two cups of tea. I brushed my teeth. I washed my face. Then I rested.

I rested for an hour.

Three girls came at the hotel. They were also headed to Rukumkot. I decided to walk along with them. But I was not sure about my pace and, worse, ability to walk. I had to reach Rukumkot, some four hours of walk in normal circumstances, to catch a jeep. I walked ahead of the girls for about 20 minutes. Two of them were school girls. One of them was going all the way to Khalanga, headquarter of Rukum, to take part in a training program related to adult literacy campaign. The eldest among them worked at Khalanga and studied in a college there. Two girls stayed behind. They said they were organizing a sanitation related program in the village where they stopped (Khabang).

The other girl continued her walk with me for about five minutes. I stopped to take a photo. She went ahead. In a few minutes I again stopped to talk to an Assistant Sub Inspector who was trying to make a phone call from his Hello Nepal mobile phone. I met him a few hundred meters away from his office that stood by the road. I talked with the policeman for about 10 minutes. He offered me meal (“khana khayera jam na sir”) but I refused as I needed to walk slowly but continuously till I reached Rukumkot, the old headquarter of Rukum.

The girl who had earlier told me that she was a 11th grader in a school in Lukum, largest settlement in Kankri VDC, was nowhere to be seen. After walking for about 20 minutes I saw her walking on another hill. She was walking fast. Or, may be I was walking slow. I kept feeling the pain on my knee. It was only becoming intense. The pain was particularly problematic whenever the trail went down. I walked for about 30 minutes to reach a place where one hutel served lunch. I stopped there and ordereda a meal. It turned out to be a brilliant decision.

There were three guys who were waiting for food. We ate together. They were also going to Rukumkot. They were traveling with a caravan of donkeys. The conversation somehow got started on it’s own. The hutelwallah was an aboard returnee (Malaysia). One of the three guys had also returned from Saudi Arabia a decade ago. This made me curious about those men and their village. I took out my notebook. I had plenty of questions to ask. One of the three guys was a very young man, about 17 years old. He didn’t interest me much. The remaining guy owned the donkeys. The hutelwallah turned out to be a Dalit (the so called untouchable).

We started our walk. Soon the donkey owner asked me if I wanted a donkey to carry my luggage. I had passed the bag to him within three seconds. The offer had come to me as a pleasant surprise. Now I was carrying a small bag that contained a camera and an iPad. [Added later: Read about the donkey-owner, Jeetman Gharti, in Nepali here: रुकुम-रोल्पा एक्स्प्रेस- शान्तिकालमा गाउँले जनताको जीवनीका केही झलकहरू and जहाँबाट “जनयुद्ध” शुरुभएको थियो…] 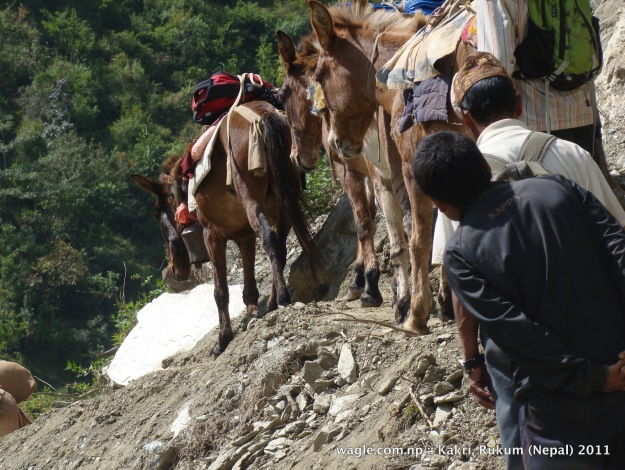 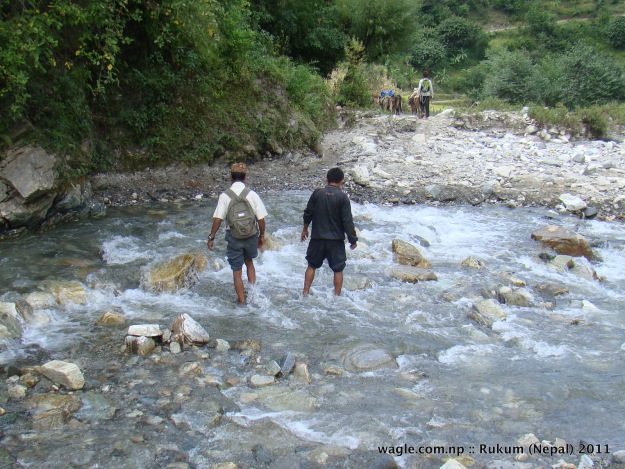 Donkey’s walked faster than me. It was not the case when I was fit and fine. I tried my best to walk together with donkeys and the three men. Good thing about donkey caravan is that they need to be stopped to provide them an opportunity to graze. Just when I was wishing the caravan to stop (I needed to rest) the men stopped as if they had heard with wish. That halt also gave me an opportunity to talk to the donkey owner who was once a Maoist “People’s Liberation Army” fighter. Once peace returned (when his party signed a peace agreement with the government formed after the popular 2006 uprising) he opted for a new job. “Then I used to run after the party… taking part in attacks in Palpa and Phaparbari,” he said. “Now I am running after donkeys.” 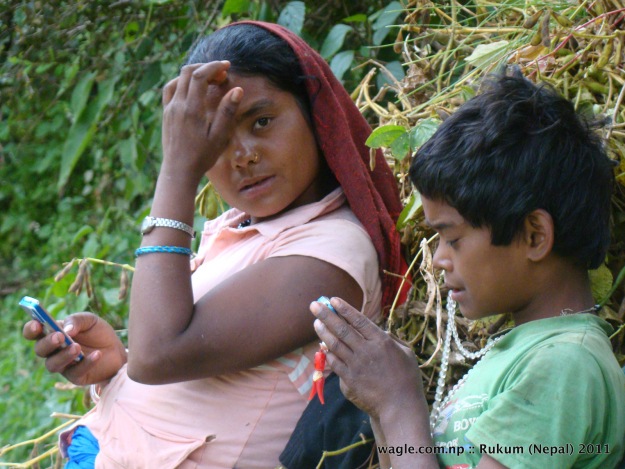 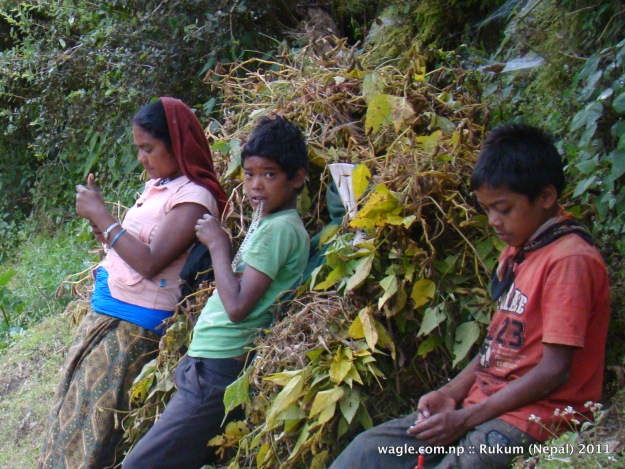 I limped a lot as I climbed up to Rukumkot. I limped more as I climbed down to the main bazaar from the hilltop. It was terrible. The pain was overwhelming. 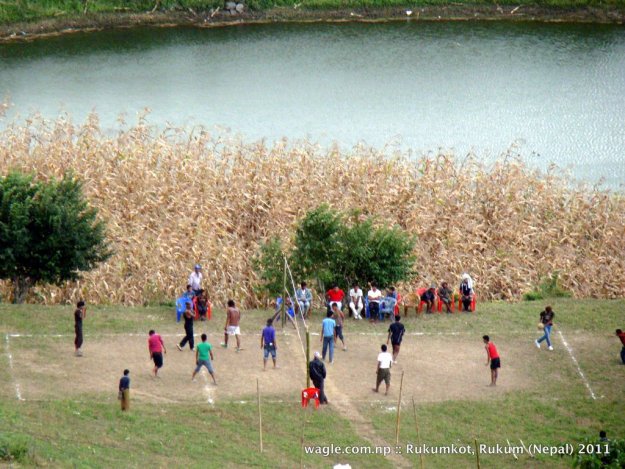 But that ‘unbearable’ pain now was overshadowed by the joy of seeing a beautiful village. THE most beautiful village I have seen in recent times. Nice location, beautiful houses, quiet atmosphere. The sun as about set. From the hilltop I could see kids playing football in a small ground in the middle of the village. But the best attraction, which I had not expected at all, was a lake covered on all sides by lotus. Thus the name: Kamal Daha. During their “people’s war” the Maoist had attacked an army post close to the daha. Villagers told me that they heard the gun fighting that whole night. Maoists had lost 34 of their comrades.

Rukumkot was once the headquarter of Rukum. Now it’s Khalanga. I was thankful to those who shifted the headquarter from here because being an administrative center demands pressure to the village. That pressure would have ruined its beauty. Rukumkot is divided into three parts- first part is at and around the hilltop. Second is by the Kamal Daha. The third part further down. This one also boasts a pond- smaller than Kamal Daha. 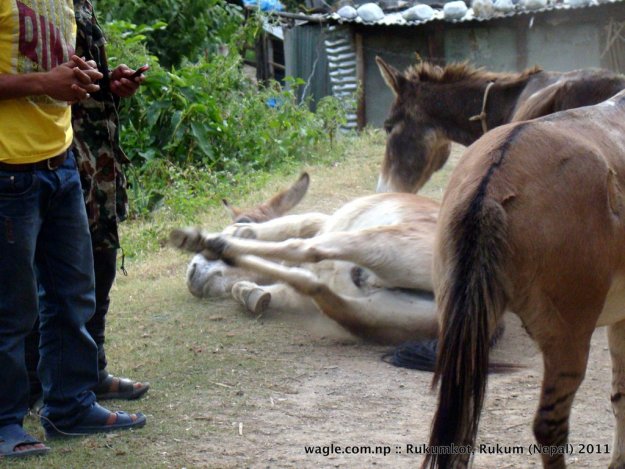 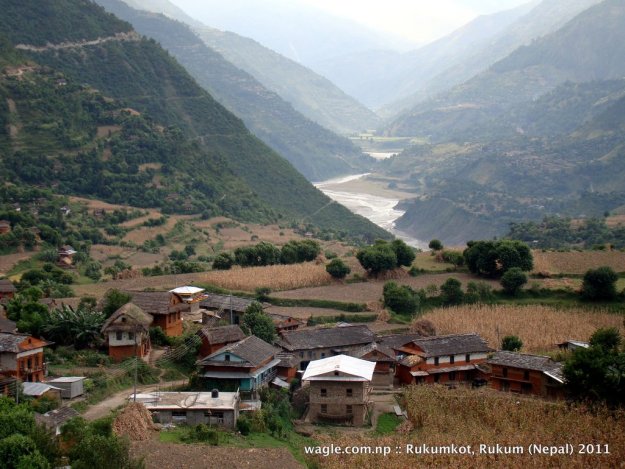 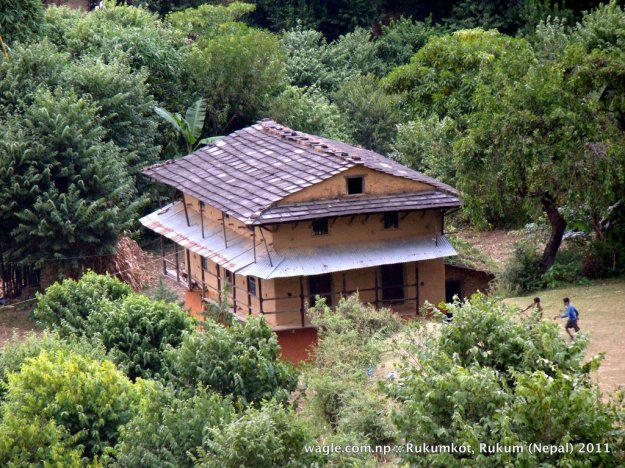 The donkey caravan stopped at the bazaar close to Kamal Daha. I was going further down, 10 minutes walk, to stay at a hotel there so that I could catch a jeep to Khalanga early in the morning. The jeep service begins from the third part of Rukumkot. As I limped down I saw people playing volleyball on a playground close to the smaller Daha. It was windy when I reached the third part. I booked a room in a hutel close to the jeep’s ticket counter. Then I went to a medical shop. The boy there put an anti-inflammatory gel on my knee and bandaged it. I felt better.

Back in the hutel, food was ready.