Every year the hilly Nepal and Kathmandu Valley celebrate Holi (Fagu Purnima) a day before the rest of the country and India do the same. This year it was Holi-Day in Kathmandu and Holi-Eve in India when these photos were taken in Jawaharlal Nehru University, Delhi on 28 Feb. There’s a tradition in JNU that requires students to organize a program called Chaat Sammelan (चाट सम्मेलन, chat conference, literally) on the eve of Holi with a lot of fanfare. The program involves a brightly lit stage, horse, asses, speakers dressed in fancy outfits, an energetic crowd, a great amount of sense of humor and infinite energy to laugh. Students come out on the streets to join a noisy procession that originates from Tapti Hostel at 9 pm. Led by a man, apparently the president of chaat sammelan, holding a briefcase with “Chaat Budget 2010” written on it, who is seated on the horseback, the procession stops by a couple of other hostels before finally halting at a ground where an enthusiastic crowd is waiting them in front of a stage.

The speakers go to the microphone and try to entertain the crowd with humorous and sarcastic speeches. That’s a very challenging job. The members of the audience start booing and hooting as soon as they sense that the speaker is faltering. Then the speaker has to either leave the microphone volunteer or a group of volunteers remove him. They either carry him back to his seat or throw him to the crowd. I didn’t remain on the venue until the program ended but I was told that the one who remains on the stage for the longest period is declared the chaat samrat (चाट सम्राट, chat emperor).

Next day is the day of colors in the University as it is with many parts of India. No lunch is served at the hostel mess on Holi-Day. The breakfast is served with unlimited glasses of bhang (भाङ). Last year I brought a 2-litter Sprite bottle-ful of Bhang from the mess to my home hoping to finish that in a day or two. In reality, I couldn’t touch the bottle for several days. A friend comes at my apartment and he is horrified to see the bottle. “This thing is about to burst,” said he and cautiously opened the lid. Then I realized why Uncle Mehra, my landlord, had told me a few days ago that he had never seen a Sprite bottle of that size. The bottle had swollen almost to the breaking point. I had Uncle Mehra saying that that was a 2-litter bottle and perhaps they don’t sell that in Jangpura.

Apart from the consumption of bhang in large quantity, Holi in India is celebrated like we do in Nepal. Bollywood has popularized and energized the festival in India with variety of songs but on the negative side the culture- of hitting passers by with lola (water-filled balloons)- is also becoming a part of celebrations. I could see boys throwing lolas at girls and other passersby days before the Holi-day. Holi-ganism has threatened to take good part of the festival away in Nepal. I could sense same is happening in India, at least in Delhi. About five hundred Holi-gans were arrested in Kathmandu. On Holi-day I went around Delhi to see how were celebrating the festival. What I saw was not entirely different from what I have seen in Kathmandu. Roads were almost empty which is a rare in Delhi. The only days when I see a thin traffic on Delhi roads are on India’s Independence Day and Republic Day. It was so easy and fun to drive around in Delhi on Holi-day. Policemen were deployed all over the city in large numbers to control possible holi-ganism. But the thick police presence made me feel that India was voting or doing something very important. I don’t recall seeing policemen on a small roundabout near my house in the past year but on the Holi-day this year I saw some policemen standing by. (Last year on Holi-day, I spent most of my time in JNU and didn’t go around the city.) 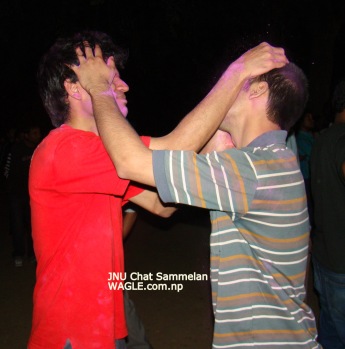 The Riot of Colors: Ishwari and Gokul attack each other (click on pic for more info)

Dinesh Kaphle (m) looks on as Gokul (l) and Ishwari aim at each other. 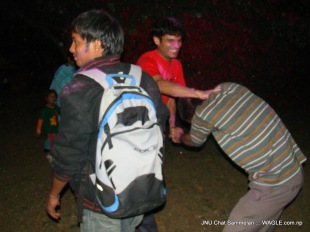 Gokul, me and Manisha. Gokul had a pocketful of colorful powder.

The procession begins at Tapti hostel, goest to a couple of other hostel where other groups join in and finally reach at the venue near Ganga hostel. 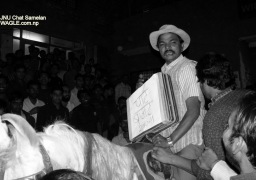 The chat budget is carried by nothing less than a horse 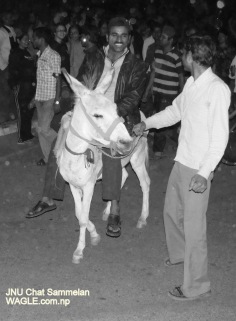 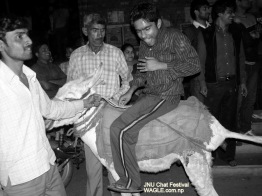 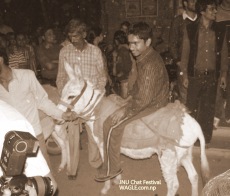 Students forcefully put one of their friends on ass 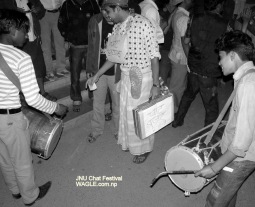 Mimmicking the finance minister, the Chat President takes out a briefcase and heads towards the sammelan venue with a lot of music. 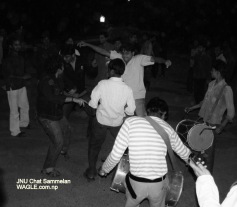 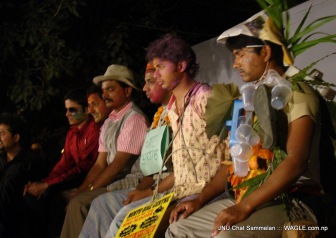 A speaker’s job is to go on the microphone and entertain the crowd.

चाट भाइ चाट: A speaker tries his luck. Before he impressed the audience, he was thrown out of the stage. 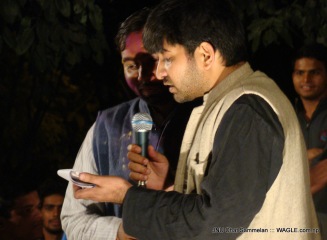 He is a Chaatukaar in himself. This guy..

Link
1. Another take on Delhi Holi.