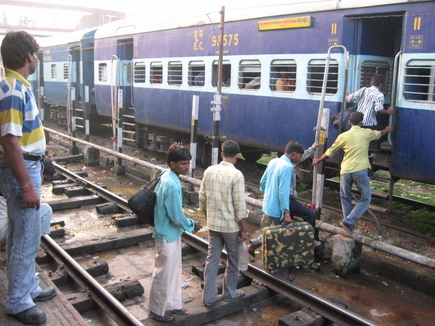 The north Indian town of Gorakhpur is not new to many Nepalis who go to many places of India via Sunauli border point. There is even a popular song that mentions Gorakhpur and the lyric goes something like this: “Aama rundai gaun beshi melai ma, chhora rundai Gorakhpur railai ma” [While mother is crying in the fields of village, her son is weeping in a rail in Gorakhpur.] The song must be talking about the plight of poor Nepali migrant workers who go to Indian cities looking for jobs. Thousands of Nepalis do a very difficult journey to find even more difficult jobs that pay little but demand a lot of labor. I had an encounter with a group of such Nepalis in Dailekh-Achham districts last February that was returning home carrying goods like a radio cassette player and cheap clothes. Here is the story that I wrote after following a boy to his home.

This was my second “transit” in Gorakhpur if I am to give some high sounding words to my trip. (The first was in late 2004 when I visited Varanashi in a trip partly sponsored by a travel agency in Kathmandu. I had gone there in a Nepali bus operated by the agency and took an Indian bus back to Sunauli from Varanashi as I had left the team.) My dream of boarding a train couldn’t be realized as I become sick and had to rush back to home fearing that I might die in a foreign land in the absence of people I know. The bus that started from Varanasi bus stand in the evening had dropped me in Sunauli in the early morning.

So this was the first time I actually stayed in Gorakhpur for a night. The next morning, on 28th September, I took a train that would take me to a place called Trivendram, the capital city of the Indian state of Kerala. By the time I got off the train three full days and two nights woule have passed and the Rapti Sagar Super Fast Express would have covered 3250 kilometers.

I first booked a hotel room in Gorakhpur as soon as I reached there and got out to see the place though it was already around 10:30 PM. I went to the railway station just across the hotel. I was kind of shocked to see the hundreds of people, perhaps thousands, sleeping on the ground, under the open sky. The railway platform and the front yard seemed like a huge dormitory offering bedding to people who looked like refugees chased away from their villages by a brutal ruler. It took me no time to assume that they were too poor to afford a hotel room for themselves and were there waiting for the train later in the night or the next morning. I hadn’t seen so many people lying on the ground just like that…

Let me quickly mention an incident in the bus that brought me to Gorakhpur from the Indian side of the Sunauli border. There were a couple of people, apparently from private buses that operated between the border and Gorakhpur, trying to convince people to take their buses. Without listening to them, I sneaked into an Utter Pradesh government run bus with help from my Kantipur Bhairahawa colleague Madhav Dhungana. In a few minutes the bus left for Gorakhpur. I saw some people, new passengers, coming into the bus and paying the fare to the conductor. But the conductor never came to me to ask for the fare and I didn’t go to him. As Gorakhpur approached I became little bit anxious about the payment. I told a fellow passenger, an aged man, about my anxiety when I asked him where exactly to get off in Gorakhpur so that I could stay in a hotel very near to the rail station. “Now, if you go to him and tell that you want to pay the fare,” said the man, “he will not only scold you but will fine you heavily for traveling without a ticket. The station is coming in a few minutes. Just stop the bus and get out.” I did the same and, later, realized that I “saved” about 90 Indian rupees. To be honest, I didn’t want to travel without paying the fare but circumstances made me do so.

So after roaming around in the railway platform I came back to the room, set the alarm in my cell phones for 5 AM (6:30 was the train time) and tried to sleep on the bed that needed careful balance of the body so as not to fall down. That’s why they charged IRs 250 only, I thought.

Soon after I booked the room, I bought a SIM card of BSNL, an Indian cell phone carrier, and made a few calls.

In the morning I woke up several minutes before the alarms did their bit of duty. I took shower and checked out.

Surendra Hamal, a Nepali who works for the Indian Army

I found the right platform (there were several) with the help of an information desk and managed to sneak into the right compartment which was somewhat surprising. I had expected some sort of complexity in all that process but it was easy. I was filled with a strange feeling when I entered the compartment. I was excited and anxious when I finally fount the seat as designated in the ticket.

A girl was seated on my seat. I told her that that was my seat and she instantly moved to the one facing it. The girl, perhaps in her late teens or early 20s, was traveling with her parents. The north Indian Hindi speaking family was going to Chennai, a south Indian city, to see their son who was studying Engineering. 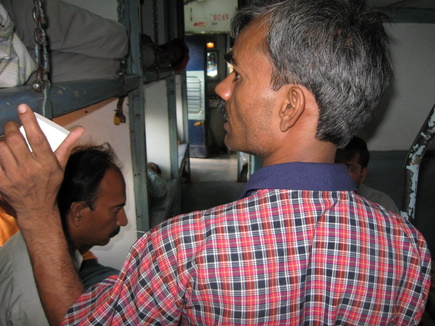 A kitchen staff at the Rapti Sagar Express takes order of the dinner. He preferred to receive the payment at the end of the passenger’s journey. He didn’t ask for money on the first and second day of the trip. Some people, he said, give wrong information about their destination and get off from the train without paying. Opposite happened in my return trip to Gorakhpur from Bombay 10 days later. The kitchen staff ran away without returning change of Rs. 100 to me. The cost of food was Rs. 35.

Train and Beach: Two things I liked the most about India are trains and beaches that we don’t have in Nepal. India has one of the world’s largest railway networks and trains here handle the traveling of some 20 million people daily. (That number is slightly less than the total population of Nepal which is not surprising, in fact, considering a billion plus population of our southern neighbor.) Rails are like a world in themselves. The train that I boarded in for Trivendram was called Rapti Sagar Super Fast Express and I thought it was more than a kilometer long. I couldn’t see the end I liked trains more than the beaches. The trains are really huge. I imagined that they might look like big snakes crawling slowly all over India. My assumption also tells me that Indian railway track should undoubtedly be one of the world’s largest toilets, if not the largest, as the human wastage from the lavatories inside the rail compartments directly falls over the track. Thus the railway tracks are mostly smelly. One difference that I found between highways and railway tracks is that houses are faced towards the highways because vehicles stop and provide business and social opportunities. The same applies to the railway tracks. I saw, in many places, houses were made facing their backs to the railway tracks because a train never stops at places other than the platform.

By the end of the morning, I had started conversation with a Nepali young man who worked in Indian Army and was going to assume his duties in Kerala after a month long vacation. His presence in my compartment was the most helpful thing to pass time during the 3 days and 2 nights of journey. We talked a lot (which resulted in a two thousand word story that appeared in last Saturday’s Kantipur Koseli.)

Next: The shivering night in a train compartment